Next week, the  Office of the US Trade Representative is expected to make a determination on the potential imposition of an up to 100% tariff on imports of wine from Europe. Which is a bad thing for the overall state of the global trade, bad news for the European producers of wine, bad news for the American consumers and their European counterparts, and bad news for the U.S. wine industry. But 'bad things' do not stop there. There will be costs imposed on restaurants and bars. There will be negative spillover effects - in the long run - to the competitiveness of the U.S. wine making industry competitiveness. In other words, the new tariffs are a perfect exemplification of how poor policies in one sector can hammer the entire complex chain of value added across a much broader economy, both in the long run and the short run.

Let's start from the top.

The reason for the introduction of the tariffs on wines made in Europe - the first wave of which came in in October - has absolutely nothing to do with the wine makers or wine importers or wine consumers. Back in September this year, the WTO Arbitration Panel has ruled that Boeing (the U.S. civilian aircraft manufacturer - in addition to being also a major military-industrial complex player) and Airbus (Boeing's European counterpart) received tens of billions in illegal state supports and subsidies over the period of 15 years. These supports included tax subsidies and credits and subsidised loans. All of which was well known to anyone even remotely familiar with economics of both the EU and the U.S. well before the WTO rulings.

Given the state of the U.S. trade policy (War First, Trade Later) and the fact that Boeing is in a pile of financial problems stemming from its disgraceful handling of the 737 Max scandal, the U.S. rushed out of the stables to mount its trade offensive against the EU. imposing 25% tariff levy against European wine producers. The measure, of course, was 'designed' (if one call it thus) to hurt European economies. Wine industry is iconic for countries like France (Airbus major domicile), Italy (which hasn't much to do with Airbus and was partially spared from the hit) and Spain (another Airbus HQ domicile). Germany also got hit, especially given its well known white wine production. Now, Airbus has also major presence in Mobile, Alabama, USA (where is works on A319, A320 and A321 models) and Mirabel, Canada (A220 model), although Chateau Mobile and the fabled reds of Mirabel were spared by the U.S. trade authorities.

The new round of tariffs - the 100% ones being currently considered - also come on foot of the finding that France’s new digital services tax discriminates against US tech companies, according to USTR, even though the French tax is a de facto precursor to the OECD's Digital Services Tax initiative (covered here: https://trueeconomics.blogspot.com/2019/08/12819-oecd-tax-plans-some-bad-news.html and, in more detail, here: https://papers.ssrn.com/sol3/papers.cfm?abstract_id=3406260).

European response to the same triggers was to call for a negotiated resolution of the disputes over Boeing and Airbus. Which, of course, is not how the U.S. does business these days.

The first round of sanctions had little impact on the wine makers, hammering instead U.S. supply chain - distributors, warehousing, wholesalers and retail - and U.S. consumers (just in time for the Holidays season). The reason for this is that European producers have a massive latent excess demand for their wines in Asia-Pacific and Eastern and Central Europe, where consumers prefer European wines - by taste, brands and cost points - to the U.S. wines. U.S. distributors and wholesalers took a direct hit: most of the 25% tariff has been absorbed into lower profit margins by the importers.

One of the reasons this worked is that the U.S. demand for wine is growing, which means that for relatively benign tax hikes, suppliers can lower unit margins in hope of compensating with continued growth in demand. 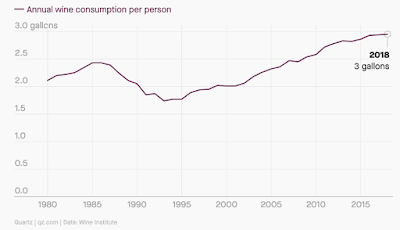 Demand has grown from the recent plateau of 2 gallons pa per person in 1999-2002, to just under 3 gallons in 2018. This margins logic breaks down when tariffs rise above 35-40% mark, making cost pass-through to the consumers virtually unavoidable.

A message from the small wine importing firm, specialising on ESG impact-driven natural wines, makes another case: http://www.jennyandfrancois.com/2019/12/17/wine-tariffs-threaten-our-very-existence/. "These [proposed 100%] tariffs are really without precedent, but to glimpse a window on the possible disastrous consequences, we could examine the 1930 Smoot Hawley Act. History teaches us that this act hastened the arrival of the Great Depression, extended its length, led to a 65% downturn in global trade, and made imported goods a luxury item only affordable to the top 1% of the American population. What’s more, those tariffs were only between 40-48%, not the 100% tariffs currently in discussion. Smoot Hawley is the reason most of the world’s leaders today favor unregulated free trade." And "I spent 20 years of my life building a successful business, and in one signature the Trump administration could make it all crumble." 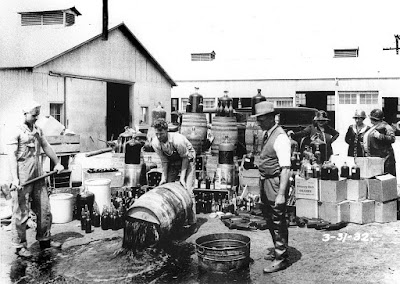 Killing wine wasn't a great policy back in the 1930s. For everyone involved. Hammering European wine today won't be either.

A wider impact can be seen in the restaurant and catering sector. Here is how disastrous tariffs on wine can be for restaurants business: https://www.postandcourier.com/blog/raskin_around/proposed-wine-tariffs-could-spur-widespread-charleston-restaurant-closures-opponents/article_3a07ee26-2e44-11ea-a9e1-b3eafe8429c4.html. "One downtown Charleston restaurant owner estimates the loss of Prosecco alone would amount to a $57,167 annual revenue loss... Just those drinks hypothetically work out to more than $1,000 a month in server tips, on average. Assuming that loss is equally shared by a 12-person front-of-house crew, each employee would be out approximately $94, or about two-thirds of the average monthly household utility bill in Charleston."

The impact is not lagged: "when the 25 percent tariff was implemented, Root says, “it became part of our working capital immediately. We had to come up with $40,000 unexpectedly” in order to free up wine which had already shipped. But he characterizes a 100 percent tariff as “impossible.”"

Even in the time-sensitive, so less tariff-elastic cases, it is the U.S. businesses that have been absorbing the lion's share of the cost increases, as illustrated by the 2019 vintage of Beaujolais Nouveau release last year that came after the 25% tariff hike of October 2. This is covered well here: https://www.winemag.com/2019/10/29/tariffs-on-european-union-goods-impact-u-s-wine-industry/. In theory, producers should be absorbing more of the tax increase cost in lower elasticity supply cases. But due to supply chain complexity and the fact that producers face global demand, with lots of substitution options, while the U.S. wholesalers, retailer and consumers have inelastic demand (due to timing-sensitive nature of the market for Nouveau releases) this is not the case.

Bad news for the U.S. producers

So higher tariffs on European wines should be a good thing to the American producers of wine, right? After all, as prices of their competitors rise, their products should experience increased demand due to consumer substitution in favor of cheaper alternatives.

This is a fallacious argument, given complexity of the wine business.

Firstly, price-sensitive consumers who have a greater incentive to switch away from European wines toward other alternatives are likely to go for cheaper Chilean and Australian wines instead of the already higher-priced Californian, Oregonian and other U.S. offerings.

Secondly, demand for all wine is likely to decline due to higher prices, but also due to the reduced range of wines that consumers might consider affordable to them. Consumers do not simply buy the wine by the price. Instead, consumers buy, say, California wine because they want something different from the Italian wine, and they buy Italian wine to diversify their consumption (broaden the range of taste options) from French offerings, and they buy French offerings because they have been consuming Spanish ones, and so on, until they reach back to California wines. It is exactly the same with food: making Thai cuisine more expensive does not necessarily mean Italian restaurants will gain more customers. Instead, it might mean that consumers will reduce demand for eating out in all restaurants and switch to fast food instead.

Thirdly, wine business is also complex. U.S. producers innovate and collaborate with European producers. Adversarial trade is not good for technology and intellectual property transfers between them. And U.S. producers are also worried about inevitable EU counter-measures. Worse, if tariffs were to trigger significant drop off in the number of wholesale, retail and restaurant businesses and trading volumes, smaller U.S. producers (who tend to be more innovative and have greater intellectual property investments in the industry) will have fewer channels to sell and market their own offerings. Here is one California wine producer views on the effect of potential decrease in the number of wholesale / distribution partners under the 100% tariffs proposal: https://tablascreek.typepad.com/tablas/2019/12/no-100-tariffs-on-european-wines-wont-be-good-for-california-wineries.html. To quote them on restaurants part of the chain impact alone: "Restaurants are famously low-margin businesses anyway. Increasing the costs of their wine programs will push some out of business, further reducing outlets for our wines."

Lastly, no U.S. producer of wine would want to face a prospect of their brand capital worldwide being associated with state-imposed tariff 'protection'. Majority of the American winemakers compete on their own creativity, experience, and marketing. In a highly product-differentiated world, hammer-all tax measures do little to help indigenous producers to succeed. They dilute quality of signalling that successful brands develop with their sweat and capital.

To quote, again, the excellent Tablas Creek folks (link above): "Why wouldn’t the wine community just switch its sources to other, non-tariff countries? Wine is not a commodity, where a customer can simply swap in a wine, even one made from the same grape, from one part of the world for another and expect them to be comparable. Wines are products inextricably tied to the place in which they are produced. And the disruption of 100% tariffs on wines from the world’s oldest wine regions would have cascading impacts that would reach deep into a whole network of American businesses, investors, and consumers."