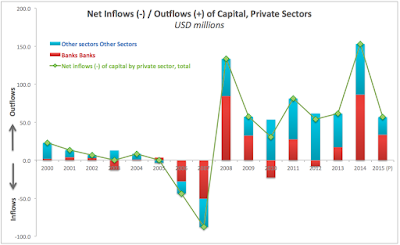 As noted yesterday, both Fitch and S&P came out with (well, sort of came out in Fitch case) updated ratings for Russia. I covered S&P ratings here: http://trueeconomics.blogspot.ie/2015/04/17415-conservative-to-surprising-degree.html

According to the Russian Finance Minister, Anton Siluanov, Fitch postponed formal ratings review and held Russian ratings at BBB- - just a notch above junk grade. Fitch, thus, retains the only non-junk rating for Russia amongst the Big 3 agencies, with S&P at BB+ and Moody's at Ba1. According to Siluanov, the postponement reflects improved data outlook for the Russian economy.

Fitch was the first of the Big 3 to cut Russia’s rating back on January 9 (see http://www.reuters.com/article/2015/01/09/fitch-downgrades-russia-to-bbb-outlook-n-idUSFit89012120150109). Since then, Russian eurobond issue, maturing 2030 posted a 13 percent plus rise. In part, this reflects firming up of the ruble, and to a larger extent - the unprecedented levels of liquidity flowing into sovereign bonds markets worldwide. But in part, improved yields are also reflective of adjusting expectations concerning Russian economy. For example, alongside their February downgrade, Moody's estimated Russian capital outflows for 205-2016 at USD400 billion and Russian GDP was forecast to fall by 8.5%. Current consensus in the markets is that outflows will be closer to USD150-170 billion (on expected debt maturities) and the economy is likely to contract by closer to 4-4.5%.

Capital outflows figures stabilisation has been rather significant, especially given the level of debt redemptions in 1Q 2015 (see here: http://trueeconomics.blogspot.ie/2015/04/14415-russian-external-debt-redemptions.html). In 1Q 2015, estimated outflows totalled just USD32.6 billion, compared to USD77.4 billion in 4Q 2014 and with USD48 billion outflows in 1Q 2014. While banks continued to deleverage, non-financial sector was able to roll over much of maturing debt and were repatriating assets into Russia. The net result was inflow of forex into the Ruble market.

Deleveraging in the Russian economy is going at a breakneck pace: in mid-2014 Russian external debt (over 90% accounted for by private sector) stood at just over USD730 billion. By the end of 1Q 2015 estimated external debt has fallen to USD560 billion, implying net debt reductions of USD170 billion over the span of 9 months, well above my earlier estimate of net repayment of USD96.5 billion that excluded Ruble devaluation effects. The USD170 billion estimate includes devaluation of the Ruble and roll-overs when these involved conversion from forex-denominated inter-company loans and equity into Ruble-denominated ones. It is worth remembering that roughly 1/4 of Russian external debt is denominated in Rubles.

When it comes to sovereign ratings, it is also worth remembering that Russian public sector external liabilities amount to less than 10 percent of the total external debt.

Overall, Fitch decision to hold Russian ratings under review is a reflection of the recent improvements in the economic outlook, but also the fragile and early nature of these. As I noted on numerous occasions before, the situation is fragile and the risks to the downside are prominent, so Fitch's more cautious approach to ratings is probably better justified by the current environment.

Based on the latest data from the Institute for Foreign Trade, The Gaidar Institute for Economic Policy and the Russian Presidential Academy of National Economy and Public Administration, as of February 1, 2015, share of forex deposits in Russian banks rose to 35.7% of total monetary base excluding cash, up on 19.4% a year ago. The degree of 'dollarisation' (conversion to forex) was higher in 2014 than during the 2009 crisis, when the share of forex deposits stood at 35.3% and is second highest after 1998 crisis peak.

In 2014, Russian residents directly withdrew USD28.6 billion in forex from the banks. A large figure, but significantly less than in 2008 when this figure stood at USD51.4 billion. Over 2014, Russian banking system lost, in total, USD40 billion of forex to cash conversions and deposits withdrawals - all of which was registered as capital outflow from Russia.

The research note can be accessed (in Russian) here: http://www.ranepa.ru/news/item/6869-monitoring-4.html.

Interestingly, it tells the story of banks running out of deposit boxes storage capacity around November-December 2014 as households rushed to convert to forex holdings (mistrusting the Ruble) and switched to holding this forex in cash (mistrusting the banks).

February data showed significant moderation in dollarisation. Forex deposits held by the Russian banks fell 10.7% to RUB5.1 trillion, while Ruble denominated deposits those 2.7% to RUB13.8 trillion, with changes driven predominantly by the strengthening of the Ruble (in February, Ruble gained 14% relative to the basket of USD and EUR).

Over the last 12 months, corporate forex deposits rose substantially, with 41.3% of all corporate sector deposits now held in forex - a sign that Russian companies are continuing to build forex reserves to counter existent and potential future sanctions. In effect, Russian companies are cutting back on exporting forex out of Russia in fear of losing control over these funds in the future. At the same time, household forex deposits fell by USD5 billion and Ruble-denominated deposits rose on improved Ruble exchange rate.

I have remarked on a number of occasions just how rapidly Russian current account can adjust to an external shock. This time around, the adjustment is via decreasing imports to compensate for both - the ruble devaluation effects and the sanctions/counter-sanctions effects, as well as the traditional economic recession pressures.