With Covid-19 cases worldwide reaching almost 143,000 worldwide, it is worth examining some of the data on healthcare systems' capacity to absorb the influx of patients in weeks to come.

Here is an interesting set of data from OECD comparing the numbers of hospital beds per 1,000 population across the range of countries (I highlight some interesting comparatives): 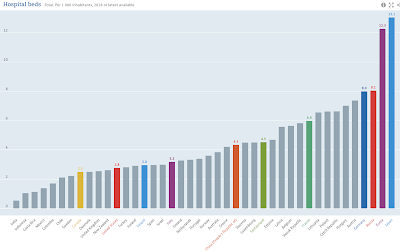 These are not ICU beds with specialized equipment, of course, but it is hard to imagine that the relationship between ICU beds and general counts of beds is non-linear. Some people on Twitter claimed that the U.S. has higher number of acute care beds, than, say Italy or S. Korea. Which is simply, factually, false. Here's OECD data: 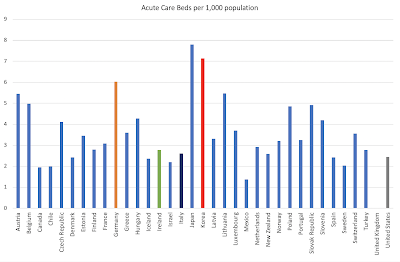 The reality is simple: no country is fully ready for the onset of the Covid pandemic at the scale of what has happened in more impacted countries, like Italy, Korea or China. But of all countries we have data for, the U.S. system of healthcare is probably the least capable of handling any large scale public health events, not only due to mediocre capacity, but due primarily to the lack of access to healthcare. 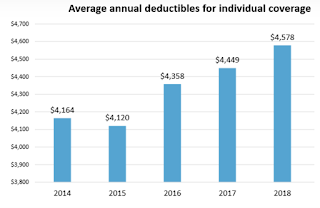 Roughly-speaking, between 159 and 162 million people living in the U.S. either have no access to insurance or cannot afford their deductibles. Does anyone expect these people to be pro-active in accessing testing and treatment for Covid early on?