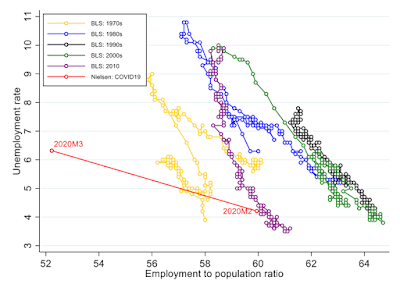 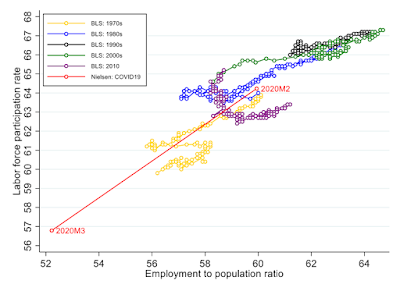 The striking collapse in estimated participation rate is down to several factors, some expected, some less so. Per authors:

"Why do so many unemployed choose not to look for work? ... Prior to the crisis, most respondents out of the labour force claimed that it was because they were retired, disabled, homemakers, raising children, students, or did not need to work. Only 1.6% of those out of the labour force were claiming that they could not find a job as one of their reasons for not searching. At the height of the Covid-19 crisis with a much larger number of people now out of the labour force, we see corresponding declines in the share of homemakers, those raising children and the disabled. However, we see a large increase in those who claim to be retired, going from 53% to 60%. This makes early retirement a major force in accounting for the decline in the labour-force participation. Given that the age distribution of the two surveys is comparable, this suggests that the onset of the Covid-19 crisis led to a wave of earlier-than-planned retirements. With the high sensitivity of seniors to the Covid-19 virus, this may reflect in part a decision to either leave employment earlier than planned due to higher risks of working or a choice to not look for new employment and retire after losing their work in the crisis."

This is interesting and far-reaching. If true, such changes provide some - rather substantial - clearing of the path to promotion and career advancement by the older generation of GenX-ers. But it also might be a feature of the COVID-relted layoffs that could have been accompanied by the longer-term jobs destruction in sub-occupations and sub-sectors that tend to simultaneously attract senior or in-retirement workers and be associated with higher degree of person-to-person contacts, e.g. in basic services.