For those interested, there's an ongoing debate about the benefits and costs of two different approaches to dealing with the Covid19 pandemic that are being contrasted in the case of Sweden (low level of restrictions) and Denmark (high level of restrictions). The two countries offer a decent 'natural experiment' data, due to their physical, cultural, historical and socio-economic proximities.

Peter Turchin dissects the evidence on the outcomes here: http://peterturchin.com/cliodynamica/a-tale-of-two-countries/ in a very readable and, yet, empirically rigorous analysis. 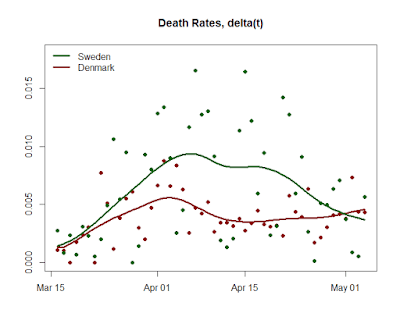 The chart above is the key, although not the only source of the insights. Lines represent a fitted model, while points represent actual data.

What is notable in the above (some of it is in Peter's post, some is not) are the following features of the data:

The rest of conclusions are down to you, folks.