The U.S. media has been quick in accusing Russia of stirring the current wave of violence that is sweeping across the U.S. cities. As daft as it may sound, Russia has now been effectively elevated to the national cause of every malaise in many major U.S. media outlets. As quipped on Twitter by Seva Gunitsky, politics professor at University of Toronto, 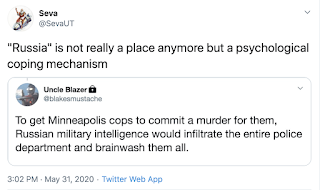 Well, the problem, of course is that the U.S. leads the rest of the advanced economies in domestic political violence in recent years. 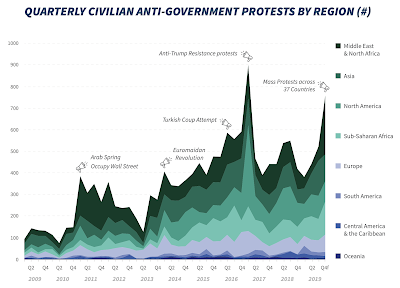 The above chart comes from Samuel J. Brannen Christian S. Haig Katherine Schmidt "The Age of Mass Protests: Understanding an Escalating Global Trend", Center for Strategic & International Studies, 2020. Note that Europe in the above includes countries that are outside the EU27, such as Russia and Ukraine. The entire continent of Europe has consistently fewer anti-government protests than North America, which includes Mexico and Canada. North American data here is heavily dominated by the U.S.

And this is not a new phenomena. Police brutality and racism, racially-based violence and violent protests are not new for the U.S., and all of these events predate the existence of Russia as an independent state, as established here: http://peterturchin.com/age-of-discord/united-states-political-violence-database/. The full paper is here: http://peterturchin.com/PDF/Turchin_JPR2012.pdf.