For those interested in the current events in the U.S., here is a data-driven background to police violence as a systemic problem: https://mappingpoliceviolence.org/.

Couple of key charts, focusing on systemic and broad reach of the issue: 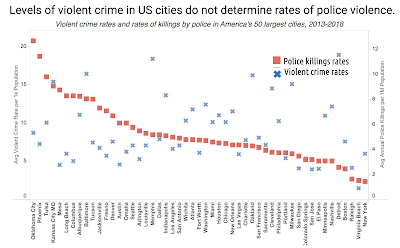 The chart above appears to be in part impacted by significant outliers. However, I doubt that removing these will generate a strong enough relationship, especially a linear relationship, between the two data sets.

Another interesting feature of the data: "99% of killings by police from 2013-2019 have not resulted in officers being charged with a crime." Which, of course goes to the heart of the policy brutality problem being a systemic one: no one is held accountable. The Buffalo police department case, currently unfolding, is a perfect illustration. Read the details here: https://buffalonews.com/2020/06/05/57-members-of-buffalo-police-riot-response-team-resign/. In the nutshell, police officer gravely and unnecessarily injures an elderly unarmed and non-violent resident. This is done in witness of the entire squad and the media. Live, on camera. The injured person is displaying immediate signs of head trauma, noticed by the police squad. No one provide any help to him. Worse, one person attempting to do so is pushed away by his colleague. In response, and after massive outrage from the public (only after such outrage), the two police officers being directly involved in the alleged case of unwarranted violence, are placed on suspension, pending an investigation. 57 of their colleagues decide to stage a protest. This is a direct signal of not just defiance by the 57 police officers against the norms of any society and procedures of their own department, but a sign of their conviction that they are above any accountability for their actions. Circling back to the 99% reference, if you work in an environment where 99 of 100 cases of the use of deadly force are left un-addressed, you will act like a judge, a jury and an executioner, while expecting the rest of the society to slavishly adhere to your command and control.

There is a daily, and on some days, hourly, stream of news flow showing live abuses of their power by the police forces. The geography of these abuses does not appear to be well-defined by political voting: liberal and conservative-led states, counties and cities are all subject to this problem. Which indicates that the culture of non-accountability in police forces in the U.S. is not driven by politics, or at the very least, not driven by politics alone. If we are to seek remedies to the problem, we need to understand the underlying causes, first. In my opinion, marginal or methodological changes to the police forces operating manuals won't do the job here, because the cause of this problem is, in my opinion, institutional, not supervisory or compliance. There is a need to break the culture of non-accountability by the police, to remove the perception of police as being somehow above the ordinary resident, and to remove the power of police to shield themselves behind the wall of silence. We need robust and frequent prosecution of police officers involved in acts of brutality and ex excessive use of force, and we need to follow these prosecutions with pursuing criminally and administratively those of their colleagues who aid and abet them in these acts by silence, indifference, false 'solidarity' and non-reporting of crimes.