Things are getting more complicated in the Nordics in the wake of the unfolding second wave of the pandemic: 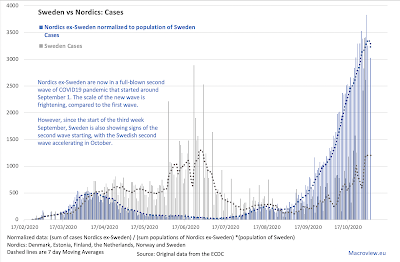 The second wave of the pandemic has started first in the Nordics excluding Sweden, but the same wave is now also beginning to manifest itself in Sweden. Adding to the complexity of analysis, Swedish data is now being reported with significant volatility (multiple consecutive '0' observations per week), making higher frequency comparatives basically impossible.
Nonetheless, Sweden is now catching up, once again, with the rest of the Nordics in terms of new cases.  In the last 7 days, Sweden averaged 1,204 cases per day (up on 627 average daily rate of new cases in the two weeks prior). Nordics ex-Sweden averaged (adjusting to Swedish population) 3,228 daily new cases over thee last 7 days, with prior 14 days average of 2,775.
In terms of daily deaths, Sweden currently performs significantly better than the rest of the Nordics. Sweden's average daily deaths run at 0 over the last 7 days and 0.43 deaths per day average over the prior 14 days period. Nordics ex-Sweden (again adjusting to Swedish population) averaged 17 deaths per day in the last 7 days, and 10.6 deaths in thee prior two weeks period. However, this better performance by Sweden is at least in part due to the later start of the second wave of the pandemic in thee country compared to other Nordics.
Overall, for now, excess deaths count in Sweden compared to other Nordics is shrinking, currently at 2,580. 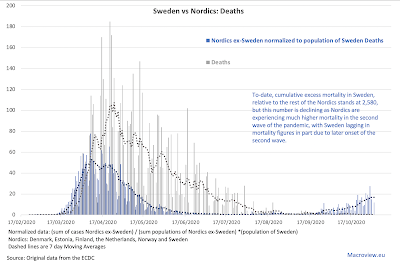 Only time will tell whether thee current second wave dynamics are going to push Sweden once again into the position of being worse-hit by the pandemic than its Nordic counterparts.

My last update on Nordics vs Sweden comparatives was a month ago, although I did post some more recent data trends on Twitter since then. Here are the latest numbers: 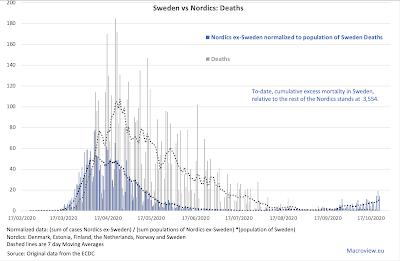 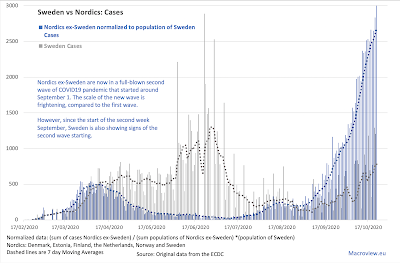 New deaths counts are relatively benign, both in Sweden and (at a higher rate) in the rest of the Nordics. However, new daily counts in thee Nordics ex-Sweden are literally out of control as a new, and much larger wave of the pandemic sweeps EU27.

Sweden entered the second wave of the pandemic with a delay, compared to other European states, so its numbers are still lagging those in other Nordic states.

I commented on the often-heard argument in favour of Sweden's 'herd immunity' strategy earlier today and you can read it here, if you missed it (bottom of the post): https://trueeconomics.blogspot.com/2020/10/231020-covid19-update-countries-with.html.

It appears, based on Sweden's (amongst others') experiences, that we really have very limited options in terms of public policy response to the pandemic. My five cents, based on multiple observations of experts' advice: we need

There has to be public and state-level zero-tolerance view toward anyone failing to comply with these measures.

Anything short of these will result in stop-and-go swings of the pandemic and knee-jerk policy reactions with rolling shutdowns of the entire economies.

Sweden is not acquiring the fabled 'herd immunity', folks. And other Nordics are now in a full-blown second wave of the pandemic: 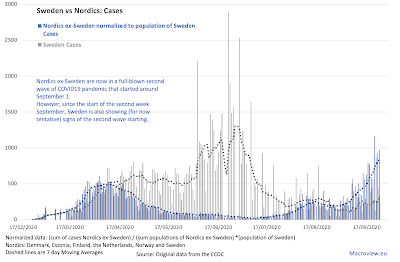 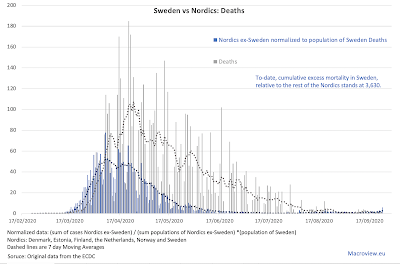 As the figures above show,

I have not updated the controversial comparatives between the Nordics (ex-Sweden) and Sweden in terms of COVID19 pandemic figures for some time now. For those of you who are out of the loop in this controversy,

There has been a lot of controversy as to the effectiveness of the lack thereof of the Swedish strategy.
So here are the key data trends and points: 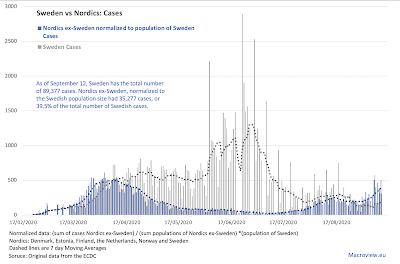 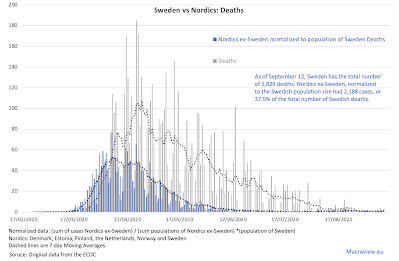 Key takeaways from the above:
Watch the new wave developing in days ahead...
Sweden has been continuing its uncontested-by-anyone-else march toward thee non-existent 'herd immunity': 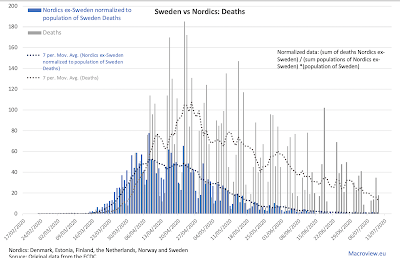 And the pipeline of upcoming intensive care patients seems to be un-abating: 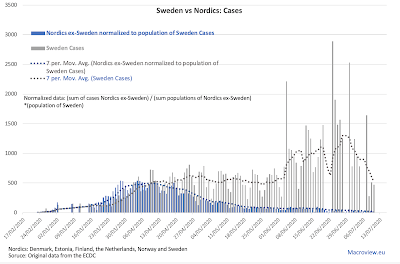 In the mean time, the rest of the Nordics have crushed the curve. And this is without inclusion of Iceland.
Personally, I cannot understand how Sweden's resident are tolerating this, but... who knows...