Going into the COVID19 pandemic, the U.S. households cost of servicing debt and other financial obligations has been trending at historical lows. The data we have is through 1Q 2020. In April, personal disposable income rose 13.1 percent, before falling 4.9 percent in May. We won't know the data for actual debt servicing burden for June until July 31st, but the above monthly income figures suggest that the burden of overall financial obligations should have fallen to around 13.955 percent by the end of May, the lowest on record: 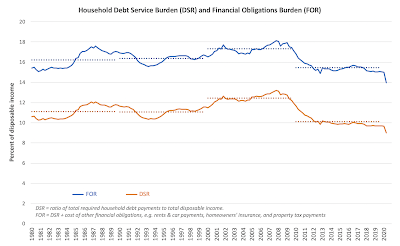 The above estimate is, of course, based on no extraordinary uplift in debt levels. It is, however, consistent with the significantly loosened conditions for credit in the U.S. banking system through

Given that April 2020 increase in disposable income was driven exclusively by fiscal transfers, and given the fact that a reduced burden of debt servicing for households is likely to sustain lower default rates on debt than would have occurred in absence of such transfers, the above illustrates a de facto channel for monetary policy transmission from QE (deficit monetization) to the households and then to the banks, with credit tightening peaking in early April and then easing through the week of July 10th.