If the U.S. of A. is the land of the brain-dead leadership, Europe (the EU) is the land of the unliving ones. The difference is the ratio of effort to failure. The Trump Administration is almost effortlessly creates daily flow of disasters. Meanwhile the EU27 is endlessly engages in strenuous attempts to not achieve something trivial.

Latest instalment is the European leadership summit this weekend: https://www.reuters.com/article/us-eu-summit/eu-nations-deadlocked-at-tense-coronavirus-recovery-summit-idUSKBN24J0A2.

One thing of note from Ireland's (and other net contributing states') perspective is that, as I predicted two months ago (https://www.thecurrency.news/articles/17392/france-and-germany-have-proposed-a-e500m-fund-to-shield-european-economy-what-does-it-mean-for-ireland), the proposed EU fund for addressing COVID19-induced recession will be a net cost to the more advanced European states.

What's worse is that this cost will be a function of Ireland's famously grotesquely inflated GDP. The tax avoidance shenanigans of the multinational corporations will cost us more in the COVID19 Fund case. And since all measures of our economic activity, from GDP to GNP to GNI to GNI* already include taxes paid by the multinationals to the Irish Exchequer, this added cost is not going to be recovered through tax revenues.

Here are some facts. The latest data for the official "Modified gross national income at current market prices" or GNI* - a measure of economic activity that is published by the Irish authorities, that partially (note: partially) strips out these tax shenanigans - is 2018. So we can use data through that year as a yardstick by which we can measure the official and only partial gap between the real economic activity in the State and the imaginary pretend-to-matter GDP of the Republic.

In 2018, actual GNI*-measured activity was EUR 197,460 million, while official GDP was EUR 324,038 million. The real economy of Ireland was, therefore, at least 39 percent less than the officially-measured economy of Ireland. Put differently, we claim we had a national income of 324 billion, but in reality, we only made 197.5 billion. If Ireland was filling a mortgage application, it would be lying on its income line.

This gap is growing over time (chart next, with estimates for 2019 based on actual GDP reported and estimated GNI* gap from the gross value added statistics, and 2020 forecast): 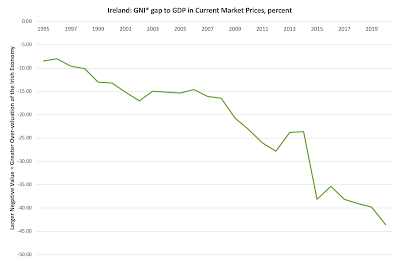 Yes, you see it right:

Since EU contributions are, in part, based on GNI (not GNI*), which is closely linked to GDP, and thus to gross accounting effects from the multinationals, Irish contributions to the EU27 budget are excessively inflated, roughly, by the gap factor. We know as much, as even ESRI - the mouthpiece of the 'official Ireland' - said so before.
Now, back to the EU27 'COVID Fund'.
Irish authorities finally recognised the fact that Ireland will be a net payer into the fund, as opposed to a net beneficiary: https://twitter.com/tconnellyRTE/status/1284433835581726725?s=20. Which is what I warned about two months ago, when many Irish commentators were busy dividing the imaginary COVID Fund largesse into spending and investment priorities 'made available' to Ireland from Europe.
Based on the GDP/GNI* gap, Ireland's repayments on the EU27 'COVID Fund' are likely to be 40% higher than the actual Irish economy's productive capacity would entail.
The Fund is also likely to alter, long-term, the structure and the distribution of the Member States' contributions. Most likely, it will increase a GDP or GNI-linked share being paid in by Ireland. But even without accounting for this, the fact that we will be net payers into the Fund means that our investment priorities to be financed from the Fund will have to change dramatically. In fact, for every EUR1 borrowed from the fund, we will have to generate EUR 1.43 or more in added activity / return only to account for the GDP/GNI* gap.
Take a simple example: suppose we borrow from the Fund EUR 1 billion to build a hospital. Nice idea. An expected return from the hospital that justifies such a project should be around cost of administration of investment + cost of funds + return and risk premia. Hard to pin these down, but, say we want to invest in a hospital in the first place because it will have socio-economic returns equivalent to 5 percent net of the cost of raising funds, if we were to issue bonds at 0 percent interest rate. With GDP/GNI* gap we have 5%*(1+43% Gap) = 7.15% required return to make that investment compatible to the Fund. And that is assuming we are just repaying our own share to the Fund. If the Fund also lends money to, say, Poland - a net recipient of transfers from the normal EU budgets, we will have to pay, roughly a GDP-weighted share of Poland's borrowings into the fund, too. Say that amounts to our normal net EU taxes contribution of ca 0.15 percent of GDP (historical average for 2016-2018 is actually 0.153%). This means we are actually going to be repaying 0.2145% of our GNI*-based economic capacity for Poland's financing. And so on.
What could have been economically feasible or efficient to invest in under GDP base consideration may not be feasible or efficient under the repayment cost linked to our real economic activity measures, e.g. GNI*. That hospital we would like to have, and that makes sense as a combination of a fiscal stimulus and socio-economic investment, will no longer make sense to invest in, solely because we have spent decades fooling ourselves and the world around us that we are richer than we really are... whooping 38-40 percent richer. Playing a role of a rich uncle is has a cost, folks...
Worse, the need for the repayment of the funds in the future, and more egregiously, the need to pay for the funds not borrowed by Ireland, will mean that in the longer run, Ireland will have to run higher debt or higher budget surpluses or both. If, say, Malta or Slovakia, or Hungary or Poland were to draw down funds from the COVID Fund, Ireland will need to contribute to repaying the money they borrowed. Such a repayment will either require Ireland issuing new debt or Ireland paying in from budget surpluses in years to come.
In other words, the COVID19 Fund is a prescription for more austerity in Ireland in the future years. Not for less.
Irish PM / Taoiseach says it is a good thing: rescuing Europe is also favourable to Ireland. I agree. The problem is that every little bit counts and Ireland will be going into 'rescuing Europe' with a pretend-to-matter GDP base, not with the real economy-measuring GNI*. And that is wrong. It is a right thing to contribute to other countries' recovery. It is a stupid thing to do so while playing a 'rich uncle' role we hoisted out of vanity and some strategic venality (yes, truth hurts, and truth about MNCs in Ireland hurts our pretence at not beggaring our neighbours though our tax rules).
Ireland's kommentariate will really enjoy investing in public infrastructure, the EU-style... the unliving leadership of Europe is setting us up for another 2012 'Game-changing Deal' (https://www.telegraph.co.uk/finance/financialcrisis/9365504/Debt-crisis-Ireland-hails-euro-game-changer.html). Then, again, the hope is that by the time the EU27 actually agree to the terms and conditions of the 2020 COVID19 Fund, we will be dealing with the recession of 2025 or 2032 or 2087.