A small snippet of an insight into Russian public opinion about big themed 2014 events via Levada Center: http://www.levada.ru/eng/most-memorable-events-1 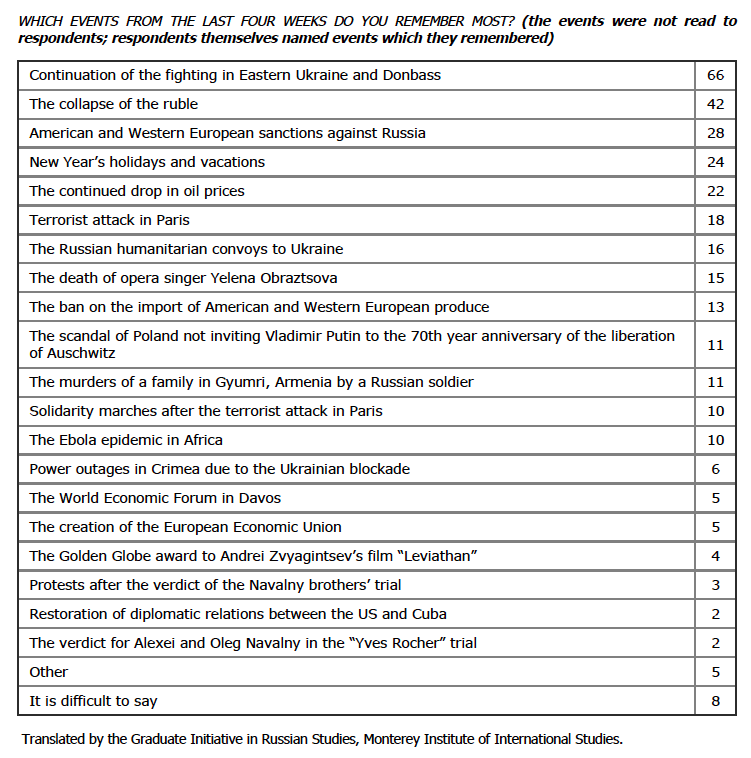 The obvious conclusion: the overall dominance of Ukraine and economic crisis in public perceptions of the most important events of 2014.

Another obvious conclusion, absolute lack of interest in the fate of Russian opposition: the Navalny case being remembered by only 2%, despite the case entering headlines once again in December 2014 - January 2015. These, of course should be seen in line with "Protests after the verdict of the Navalny brothers’ trial" (3%), pushing joint significance of the case to more respectful 5%.

Third point: whilst the Western sanctions against Russia are clearly at the forefront of public attention, the counter-sanctions (often reported in the Western press as inducing hardship on ordinary Russians) are less important than the death of opera singer Yelena Obraztsova.

Fifth point: "The creation of the European Economic Union" (5%) is about as important to Russians as "The World Economic Forum in Davos" and probably less significant than "Power outages in Crimea due to the Ukrainian blockade" (6%).