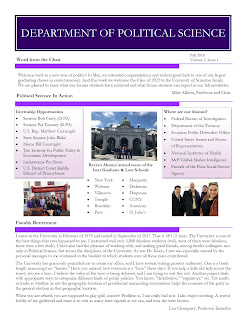 In case you are wondering what we are up to in Political Science at the University of Scranton, check out our fall 2018 newsletter. I'd be happy to answer any questions you have about our program. Just shoot me an email.

I just finished reviewing a bunch of time-sensitive applications so I hope to be back to commenting on Central American events next week.
In addition to teaching political science at The University of Scranton, I am also the coordinator of our Education for Justice office. In recognition of the heroic work of Fr. Ignacio Ellacuria and the Jesuit and lay staff of the UCA in El Salvador, we are in the process of renaming ourselves The Ellacuria Initiative.

Ellacuria transformed the UCA into a model of Jesuit education praised throughout the world. He argued that the university’s purpose was “that of contributing to social change in the country. It does this in a university manner and with a Christian inspiration.”

In September, we hosted a lecture by Marie Dennis, co-president of Pax Cristi International, entitled "Is Nonviolence Relevant in Times of Crisis?" Last night I facilitated a screening of Oklahoma Martyr, the story of Fr. Stanley Rother. Father Rother was murdered by a death squad in Guatemala in 1981. He was recognized as a martyr for the faith by the Catholic Church in 2016 and was recently beatified in Oklahoma City.

You can read more about the office and our recent programming in our fall newsletter.

Owing to my roles as coordinator and professor, I'll be traveling to Mexico City from Friday to Wednesday to participate in a meeting of the Jesuit Migration Network.
Christians for Peace in El Salvador (CRISPAZ) was awarded The University of Scranton's Pedro Arrupe Award for Distinguished Contributions to Ignatian Mission and Ministry.

The Arrupe Award is named in honor of the late Very Reverend Pedro Arrupe, superior general of the Society of Jesus from 1965 to 1983. The University of Scranton instituted this award in 1995 to further Father Arrupe’s vision by recognizing men and women for outstanding contributions in a wide variety of Ignatian-inspired ministries.

Father Arrupe was superior general of the Jesuits during the height of political violence and government repression in El Salvador, a period during which thousands of civilians were murdered by rightwing death squads, including Father Rutilio Grande, Archbishop Oscar Romero, democratic activist Enrique Alvarez, and four US churchwomen.
For the last thirty years, CRISPAZ has helped those of us in the United States and around the world learn more about the conditions in El Salvador through highly transformative faith-based delegation experiences. Here is part of today's citation:

Each year, CRISPAZ hosts dozens of delegations who live in the homes of the rural poor and meet with families who have lost loved ones to violence and migration. Beyond unforgettable stories of suffering, visits organized by the dedicated women and men of CRISPAZ foster an even more profound encounter with a people whose faith cannot be diminished, whose perseverance and love will never waiver, and whose friendship has become an invaluable part of our lives.

Through its model of mutual accompaniment, CRISPAZ delegations are asked a simple task upon returning home: take what you have learned from the Salvadoran poor and build solidarity between the poor and marginalized in your own communities. CRISPAZ challenges us today, just as Archbishop Romero did so many years ago, to be a voice for change in systems that continually marginalize the poor and to work for the rights of migrants, refugees, and all who suffer injustice.

Ignacio Ellacuria, S.J., the martyred UCA rector, stated it directly: “Do everything possible so that liberty is victorious over oppression, justice over injustice, love over hate.” For over thirty years CRISPAZ has helped our community answer that call, and we are blessed to recognize their contributions to the ongoing mission of this University.

It is, therefore, with deep gratitude and great pride that The University of Scranton bestows upon CRISPAZ the Pedro Arrupe, S.J., Award for 2017.

I was fortunate to have traveled to El Salvador on a CRISPAZ delegation in 2008. Even though I had already spent over a year in the country at different points in time, I learned a great deal from the experience. I would highly recommend traveling to El Salvador on a short-term immersion trip with CRISPAZ.

Solidarity with our brothers and sisters in El Salvador is as important as ever.

Donald Trump was in Scranton yesterday afternoon for a campaign event. I walked over to the rally but watched it on the computer. In keeping with his promise to "Make America Great Again," he went back to Scranton's roots to remind us of the good times and how he is going to bring them back. Unfortunately, he jump on our coal history. As Trip Gabriel mentioned on Twitter

Scranton is a much better place than when I arrived in 2006. Crime is still low. The cost of living is low. Housing is affordable. Out where I live, fifteen minutes outside the city, the public schools are very good. Great parks and outdoor areas. The downtown and surrounding areas continue to undergo revitalization.

That doesn't mean that many people are not struggling. There are new jobs in the area, especially at the local colleges such as our medical school. There are also some in manufacturing plans in Scranton and Wilkes-Barre. There are (were?) limited natural jobs. However, there are no big employers on the horizon who are going to bring hundreds, or thousands, of jobs to the area. There are financial struggles for families and the city. We are definitely now bringing back the television, refrigerator, and compact disk industries that were here not that long ago.

Anyway, I spoke with Mr. Gabriel about Trump's visit. And I said more nice things about Scranton. Check it out here.
Here's something I wrote for our Latin American Studies spring newsletter.

Precarious economic and social conditions have forced hundreds of thousands of people from Central America’s Northern Triangle to flee their homes in recent years. The plight of the people of Honduras, El Salvador, and Guatemala was brought home to the U.S. public during 2014’s “unaccompanied minors crisis,” when thousands of children and families voluntarily turned themselves in to the U.S. Border Patrol. While forewarned, the U.S. was unprepared wholly to care for this vulnerable population. The U.S. did not have enough beds, doctors, and social workers. In many ways, the U.S. also made life difficult for those who made it to the border so as to deter future migrants from making the same trip. Instead of dedicating additional emergency resources to tend to the needs of these people, the U.S. sought to beef up security along its southern border and even further south, Mexico's border with Guatemala.

In the Latin American courses that I teach, we often study present day conditions in Central America. Poverty and inequality led to civil wars in Guatemala and El Salvador during the second half of the twentieth century. In many ways, peace agreements to end the wars in El Salvador (1992) and Guatemala (1996) resolved the political violence but did little to address the social and economic conditions that led to the outbreaks of the conflicts in the first place. El Salvador’s poverty rate is the best among the three at approximately 35%; Guatemala (55%) and Honduras (66%) score notably worse. Life is extremely difficult and made even worse by high levels of inequality.

However, poor economic conditions are nothing new and is not the only driver of migration. For the most part, the peace agreements ended the political violence. However, that insecurity has been replaced by escalating violence carried out by street gangs, organized crime, and drug trafficking organizations. El Salvador, Honduras, and Guatemala are among the three most violent countries in the world not at war in the traditional sense of the term. The violence has led many of those who have made it to the United States to apply for asylum. They seek asylum because they are escaping persecution rather than searching for economic opportunities.

I have volunteered as an expert witness on asylum cases from El Salvador. In my capacity as an expert witness, I provide immigration authorities with background on the country’s conditions and weigh in on whether the experience of persecution that the asylee presents in his or her testimony is consistent with my understanding of life in the country. During the spring semester, Political Science and History double major Jay Cuny and I worked with law students from Georgetown University to win asylum for a young man who fled gang violence. Political Science major and Latin American Studies and Women’s Studies concentrator Kaelyn Jacques and I are currently helping a man from Guatemala pursue asylum based upon political persecution. Finally, students in this year’s Central America course will be debating an actual asylum case that I worked on last year.

If  you are a student at The University of Scranton and would like to work with me in the future, please contact me.