Brazil Services PMI slipped  in 4Q 2019, falling from 51.8 in 3Q 2019 to 51.0. Statistically, this level of activity is consistent with zero growth conditions. In the last four quarters, Brazil's services sector activity ranged between a high of 52.3 and a low of 48.6, showing lack of sustained growth momentum in the sector.

Russia Services sector posted a surprising, and contrary to Manufacturing, robust rise from 52.0 in 3Q 2019 to 54.8 in 4Q 2019, reaching the highest level in three quarters. Statistically, the index has been in an expansion territory in every quarter starting with 2Q 2016. 4Q 2019 almost tied for the highest reading in 2019 overall, with 1Q 2019 marginally higher at 54.9. For 2019 overall, Services PMI averaged 53.3, which is below 2018 average of 54.6 with the difference being statistically significant. 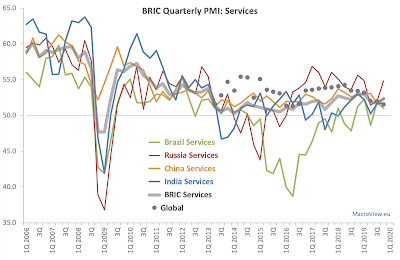 As the chart above indicates, BRIC Services PMI - based on global GDP weightings for BRIC countries - was indistinguishable from the Global Services PMI. Both averaged 52.2 in 2019, with BRIC services index slipping from 52.6 in 2018 and Global services index falling from 53.8 in 2018. On a quarterly basis, BRIC services PMI averaged 52.3 in 4Q 2019, compared to 51.7 in 3Q 2019 - both statistically significantly above 50.0; for Global Services PMI, comparable figures were 52.0 in 3Q and 51.6 in 4Q 2019, again showing statistically significant growth.

With full 3Q 2016 update on PMIs coming up relatively soon, and having not done monthly updates on the time series for some time now, here is a quick summary of BRIC Manufacturing and Services PMIs through August 2016: 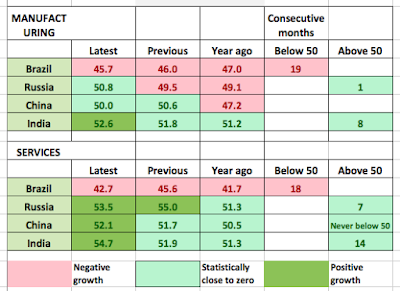 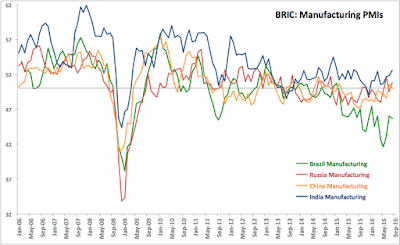 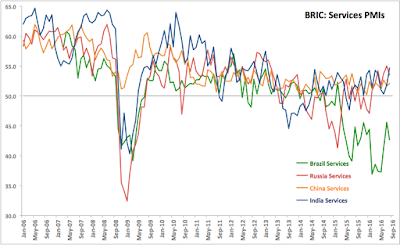 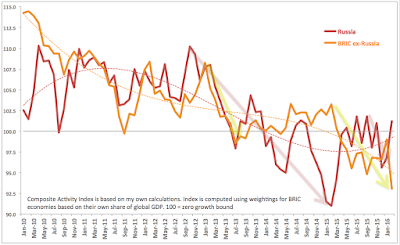 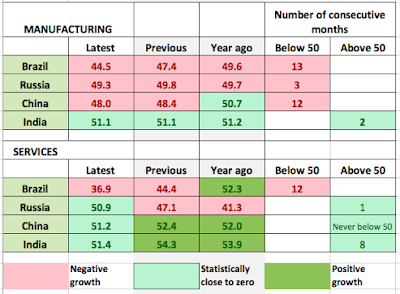 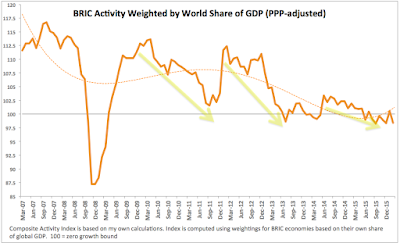 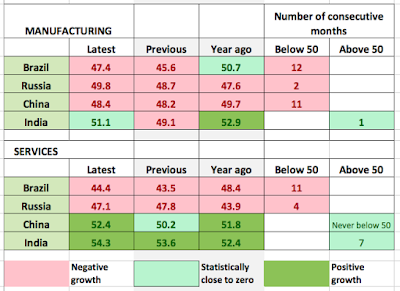 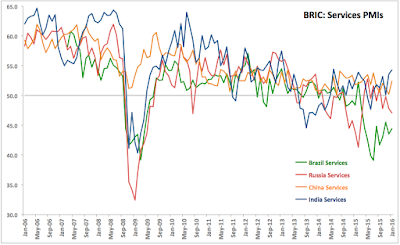 China Services PMI came in at a surprising uplift in January, reaching 52.4 - the highest reading since August 2015, and up on 50.2 in December. This move was surprising since Chinese services PMI has been deteriorating every month from October 2015.

Per Markit: services “providers had a strong start to 2016, with business activity increasing at the fastest rate in six months. …According to panellists, improved inflows of new business underpinned the latest expansion of services activity.”

As a reminder, the downturn in the manufacturing sector hit Chinese Manufacturing PMI hard with index falling to a 3-mo low in January and staying below 50.0 line of zero growth for 11 months in a row. Details of Manufacturing PMI dynamics are covered in-depth here: http://trueeconomics.blogspot.com/2016/02/1216-bric-manufacturing-pmi-january.html.

On a 3mo moving average basis, China Services PMI stood at 51.3 in January 2016, exactly the same as for the 3mo period through October 2015 and down on 52.7 reading for the 3mo average through January 2015. It is worth noting that the index never dipped below 50.0 in its entire history and the historical average for the index is at 55.1. Current reading is statistically significantly below the historical average. 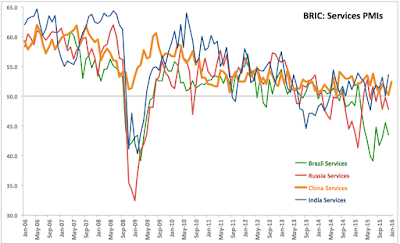 Due to substantial improvement in the Services PMI, China’s Composite PMI signalled stabilisation in overall economy-wide Chinese business activity in January, with Composite Output Index registering fractionally above the no-change 50.0 value at 50.1, up from 49.4 in December. However, overall, Composite PMI of China has been above 50.0 in only two of the last 6 months and on both occasions, index readings were not statistically distinguishable from 50.0.