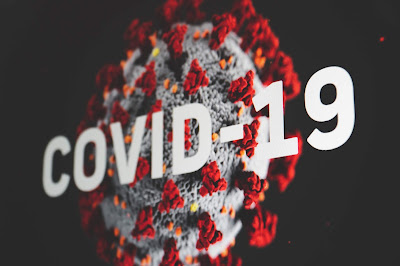 We've had a very fast moving month as the coronavirus pandemic has dominated much of our regular activity as we've nearly doubled our analytical output. In case you've missed any of it, here's a recap of several of our more unique contributions:

What Is Your Risk Of Exposure to Coronavirus In A Public Outing?

This is easily the most popular tool we've developed related to the coronavirus outbreak, where if you know how many people live in your town and how many have been confirmed carriers of the virus, you can estimate how at risk you are of coming into contact with someone who is infected if you go out to a public venue.

How Fast Could China's Coronavirus Spread?

Using the Diamond Princess cruise ship as a model, we built a tool that can project how long it would have taken all passengers and crew to become infected if they been kept on board in that ideal environment for spreading the coronavirus.

How big a bite has China's coronavirus epidemic taken out of its national economy? We develop back-of-the-envelope math into a tool you can use to answer that question and apply to any nation's economy.

Atmospheric CO2 and the Coronavirus

Now that the coronavirus epidemic that originated in China has become a pandemic, we have a unique alternative economic indicator that might tell us how much the global economy has been affected by the coronavirus.

What If There Was a Vaccine for African Swine Fever?

This tool deals with African Swine Fever instead of the coronavirus sweeping across the world today, but the math behind it certainly applies for determining what percentage of a population would need to be vaccinated to protect the entire population against infection, if only a vaccine for the condition existed. For African Swine Fever, researchers appear to be close to having an effective vaccine to fight the disease, which has caused the deaths of at least 40% of China's domestic swine herd to date.

Introducing Skyline Charts for Tracking Coronavirus Cases in the U.S.

What would happen if we group several charts like the "Tower of Hong Kong" infographic to track the daily progression of the coronavirus in several regions together? Well, when you group a bunch of towers together, you get a skyline featuring a wealth of detailed information, and that's what we introduced to the world of coronavirus data visualization.

COVID-19 Coronavirus Cases in the U.S.

We created a simple set of bar charts for tracking the number of confirmed cases, recovered patients, and deaths from the coronavirus pandemic in individual U.S. states. We update this chart daily.

The Tower of Hong Kong and Visualizing Coronavirus Case Data

We were impressed by the visualizations put together by the infographic wizards at the South China Morning Post, which directly inspired us to create the skyline charts we just rolled out.

We've developed one of the most advanced models for explaining why the S&P 500 behaves as it does and we've gone from providing weekly to daily updates describing what the market has been doing over the last several weeks and anticipating what it would do next. All are contained in the following articles, presented in chronological order:

There's more we've done, but these are the coronavirus-related highlights. We'd like to close this recap by saying thank you to our regular readers, and welcome to those of you who have discovered some of what we do in the last several weeks!

We have to thank University of Wisconsin-Madison economics professor Menzie Chinn, because we don't think that we could have produced a better chart showing the difference in post-recession economic performance of states that adopted labor, tax and regulation policies preferred by Republicans and states that maintained policies preferred by Democrats, with one set of states clearly coming out on top. 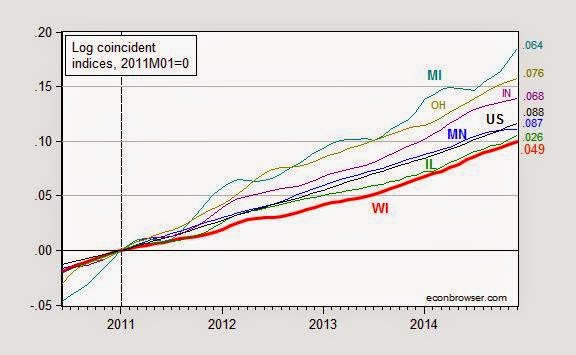 Given his other comments, we don't think that Professor Chinn necessarily intended to demonstrate that point, but that's certainly the inescapable conclusion that one must draw from the level of evidence Chinn has provided. Especially when we illustrate the partisan control of state-level elective institutions for each of these states. The chart below identifies the political party (D = Democrat, R = Republican) controlling each state's Governor's office (Gov), Senate (Sen) or House of Representatives (Rep).

Looking at the relative economic performance in each of these states and correlating it with partisan control of elective state government offices, we quickly find that Wisconsin is the outlier in the period since 2011. But then, Wisconsin is also the only state to fully switch from Democratic party control to Republican, where the losing party was able to sustain many of its preferred policies, in particular, the state's tax hikes that took effect in both 2010 and 2011, which saddled the state's economy with a tremendous amount of fiscal drag given the negative and outsized impact of the GDP multiplier for taxes.

That extension in harmful economic policies was made possible by the scorched earth campaign of political protests launched by the state's Democratic party and its extremist supporters after they lost power at the end of 2010. Their extremist campaign also increased the uncertainty that the state's businesses faced, amplifying the negative economic climate in the state. 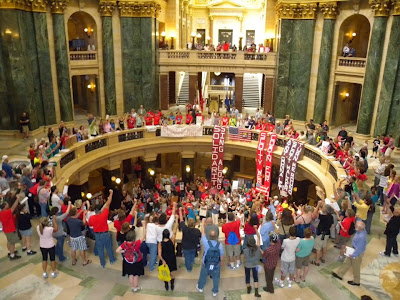 That uncertainty in large part resulted from the kind of radical leftist extremism shared by many of the state's Democratic party senators. That ideological extremism had first been fully put into evidence back in 2007, where after coming into power after having taken control of Wisconsin's state senate, passed a bill that would double the state's entire tax burden on the eve of the nation falling into deep recession.

In the summer of 2011, many of these same individuals were among those who had fled the state earlier in the year to purposefully obstruct not just the new Republican governor's public employee union reforms, but also the Governor's other economic reforms. That this group could potentially regain power led to a state of political affairs that was sufficient to derail the state Republican party from being able to fully implement its preferred set of labor, tax and regulation policies, as only the Republican public employee union reforms carried forward. Those reforms, by the way, ultimately saved both money and even the jobs of many of the state's public employees who had really been at risk of being laid off because of the state's deteriorating fiscal situation at the beginning of 2011.

Meanwhile, the tax policy of the previous Democratic party majorities in the state would remain untouched until at least July 2013, when the state's next biennial budget would go into effect.

As events transpired, thanks to Scott Walker's victory in the June 2012 gubernatorial recall election and the widening of Republican party control of the state's elective institutions in subsequent elections, July 2013 marks when the state more fully adopted the Republican party's preferred suite of economic policies. 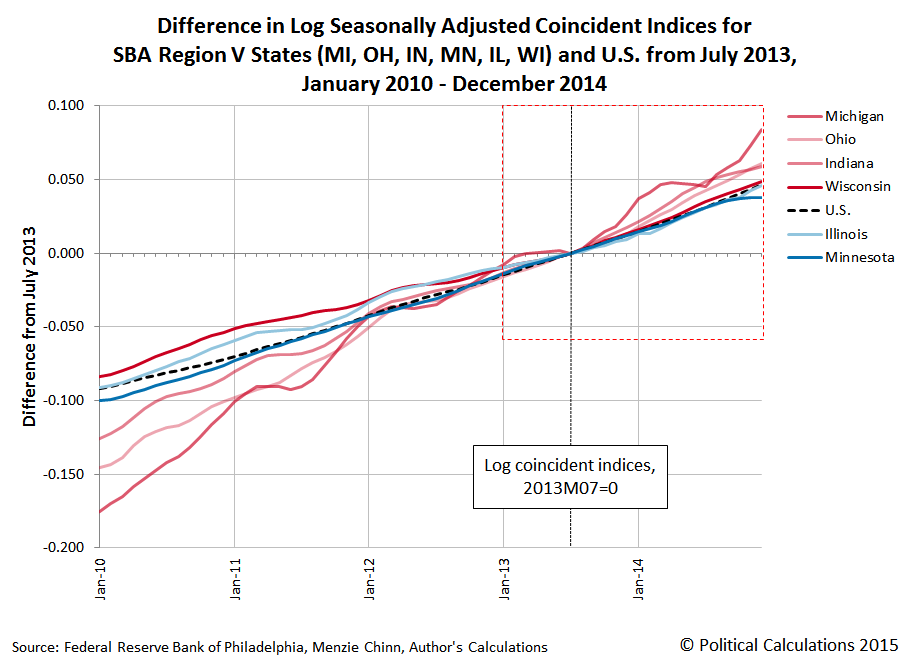 And now let's zoom in closer to focus on the years of 2013 and 2014, the area shown in the dashed red box in the upper right hand corner of the previous chart. 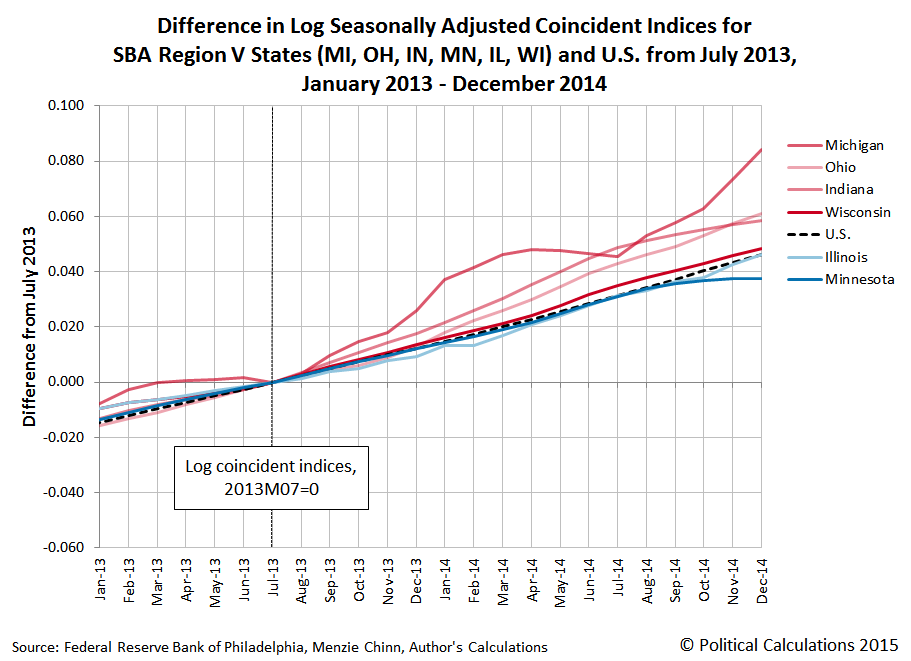 In these charts, we first confirm that since July 2013, Wisconsin has left its former Democratic party-controlled peers behind.

We see though that the state is still performing well short of the economic performance of its fellow Republican party-controlled regional peers, which may be attributable to their considerably longer head starts in implementing positive economic reforms. Meanwhile, we see that both Illinois and Minnesota have languished under their Democratic party control, with Minnesota having taken a distinct turn to the downside in late 2014. We see also that Wisconsin began outperforming the U.S. as a whole during the period since July 2013, which is significant for this period since that data series reflects the generally improving economic progress of the nation as a whole.

Curiously, we observe that unlike the other states, Minnesota went from full Republican control in the years from 2011 through 2012 to full Democratic party control in the years from 2013 through 2014, which perhaps helps account for its better performance in the earlier years and its deteriorating performance in the latter years.

As neat as time series analyses like Professor Chinn's are in measuring relative economic performance, as meaningful analysis, they fall considerably short if only the timing of changes in partisan control of a state governor's office is the only criteria for establishing a baseline for comparison, because of the context that approach lacks. As we've discussed above, the actions of those not in power can indeed have a measurable impact on the progress of a state's economic growth if they have a viable means of reattaining power, and can even be as destructive and harmful in their impact as an especially severe drought that takes years from which to recover.

Which we only mention because Professor Chinn made such an odd and unconnected reference to Kansas' disappointing economic growth since 2011, but doesn't appear to be aware of the unique weather conditions that set the state's agricultural and related nondurable goods industries and its economy on such a separate trajectory from other states, from which it continues to slowly recover.