An interesting view of the Russian economy (as usual) from Leonid Bershidsky: https://www.bloomberg.com/view/articles/2017-11-14/russia-s-economy-is-growing-with-borrowed-money

Credit, is not a sustainable source for growth in Russia, especially as the Russian households’ leverage capacity (underpinned by expected future wages) is not exactly in rude health. A recent study from the Russian government's own Analytical Center found that roughly 17% of the working population, or about 12.1 million Russians, can be classified as the working poor - those earning less than enough to cover the minimum purchases required to sustain a family. The study also found that majority of the working poor in Russia rely on microcredit, short term payday loans and/or traditional bank or credit card borrowing to meet daily necessary expenditure.

Rosstat data confirms the findings. Roughly 7% of all wage-earners are paid wages below the monthly subsistence minimum. Over 17% of people working in the education sector or various municipal services earn below-subsistence wages.

Accumulation of household debt, therefore, is hardly the good news for the economy in the long run, as debt affordability is only sustained today by the falling interest rates (cost of carry), and is not consistent with the wages dynamics, and wages levels, especially at the lower end of earnings.

Meanwhile, the latest data on economic growth came in at a disappointing print. Russian GDP growth fell from 2.5% y/y in 2Q 2017 to 1.8% in 3Q 2016, driven down by slower expansion in both exports and domestic investment. Over the period from January through September, Russian economy grew by roughly 1.6% y/y - well below the official forecasts and analysts consensus expectations. Oil output fell, despite the rise in global oil prices, as Russia continued to implement OPEC-agreed production cuts.

On external trade, exports of oil and related products were up in 3Q 2017 in line with oil prices, rising 26% y/y. Exports of metals and other primary materials were down sharply. In January-September, exports of goods were also up 26% y/y with the share of oil and gas in total goods exports up sharply to 60%.

Notably, the value of exports of goods and services (at USD250 billion) over the first nine months of 2017 has robustly exceeded the value of imports (at USD 170 billion).

Russian growth slowdown is structural, as I wrote on numerous occasions before. The structural nature of the slowdown is reflected in subdued private investment growth and lack of dynamism in all private enterprise-led sectors, with exception, perhaps of the cyclical agriculture. Even food production sector - which should have benefited from record crops (over 2014-2017) and trade sanctions (import substitution) is lagging. Capital deepening and technological innovation are far behind where these should have been after roughly 19 years of post-default recovery in the economy.

The structural decline in the private sectors activities is contrasted by expansion of the state sector.

Outright direct Government (local, regional and federal) expenditure amounts to slightly above 13% of GDP, based on Rosstat figures. This means that, raising the larger enterprises share to account for smaller and medium sized state-owned companies, the total state-owned enterprises and Government share of the economy can be around 38% mark, slightly above the 2010 estimate of 35%, provided by the ENRD. Interestingly, the above imbalances in the structure of the Russian economy do not seem to reflect too poorly on the country rankings in the World Bank Doing Business report. Out last week, the rankings put Russia in 35th place globally, our of 190 countries, placing it just below Japan and well ahead of China (78th).

In summary, Russian economy will not be able to get onto a higher growth path (from the current 1-1.5 percent range) until there is a significant shift in growth drivers toward capital deepening (necessary both to offset adverse demographics and the chronic under-investment in new capital over the recent years), and technological deepening (required to modernise industrial and services sectors). To effectively trigger these processes, Russia needs to hit, simultaneously. three policy targets:

My latest column for Slon.ru covering the topic of how Russia can jumpstart growth through targeted reform of its Special Development Zones and clustering environment: https://slon.ru/posts/62652. 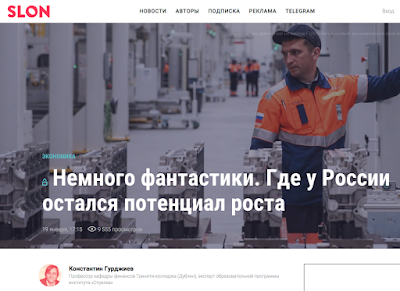 Given decline in external trade, largest adverse impact of the Russian crisis is being felt in Armenia and Ukraine.

Inflation: January inflation printed at 3.9% m/m, or 15% y/y. February 2015 inflation reached 16.7% y/y. Food prices rose 23.3% y/y in February, against 6.9% y/y inflation in food prices in February 2014. M/m February inflation was 2.2% m/m, suggesting potentially a slowdown in the rate of inflation. Some shorter term data suggest that over the first week of March, weekly CPI stood at 0.2% - the lowest weekly reading since October 2014. Good news, for many, bad news for many more: vodka prices fell 0.4% in February.

An interesting report in RBC on the proposals for economic reforms from the Russian Union of Industrialists and Entrepreneurs (sort-of Russian IBEC), РСПП (see here: http://top.rbc.ru/economics/04/03/2015/54f724ea9a79472c640c6f5e). According to RSPP, Government response to the crisis should focus on achieving further liberalisation in the economy. First pillar of the proposals focuses on early stage reforms, especially those aiming to stabilise the financial situation in the corporate sector. Second pillar contains 73 specific Government and regulatory decisions that should be suspended to reduce their adverse impact on corporate sector.

Note: those who are interested to learn more about the above topics or the business and economic environment in Russia can contact me to arrange a more in-depth one-on-one briefing.