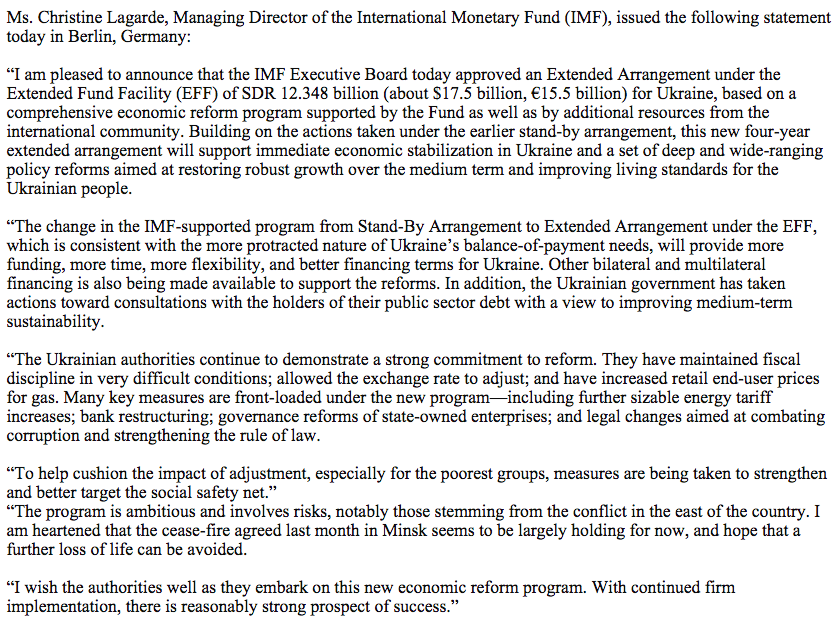 Key points to the above: IMF came through just-in-time after seeing Ukraine going down to the last USD 4.5 billion in reserves and only barely enough time to pay the loans due to be repaid to... IMF. In a sense, IMF decision avoids the risk of IMF engineering the most pesky form of sovereign default known to the humanity: a default on IMF debt. Congratulations, IMF.

The hope-filled IMF statement is worth reading, but apparently, Ms. Lagarde sees Minsk 2 agreements as "largely holding for now". Which is consistent with some reports but most certainly is at odds with the UK, US and Nato views.

Another part worth noting is IMF's continued insistence that Ukraine's economic collapse is just a temporary 'balance of payments' problem. And in line with delirium, IMF is lauding the Ukrainian authorities for allowing "the exchange rate to adjust", as if Kiev had not thrown every last bit of meagre reserves and every possible bit of capital controls at defending the exchange rate in a futile attempt to prevent such 'adjustment'.

That said, let us hope that Ukrainian economy is indeed provided some much needed support through this package and that the reforms, penned into the agreement, do not lead another Maidan.