Recently, I wrote about the sorry state of the Russian liberal democratic opposition (http://trueeconomics.blogspot.ie/2015/03/21315-two-pesky-facts-and-russian.html) and Putin's strong showing in public ratings. Here is another data set, this time reflecting this week's data:

Q: Imagine that next Sunday there will be presidential election in Russia. Which politicians would you give your vote to? President Putin's share of the vote: 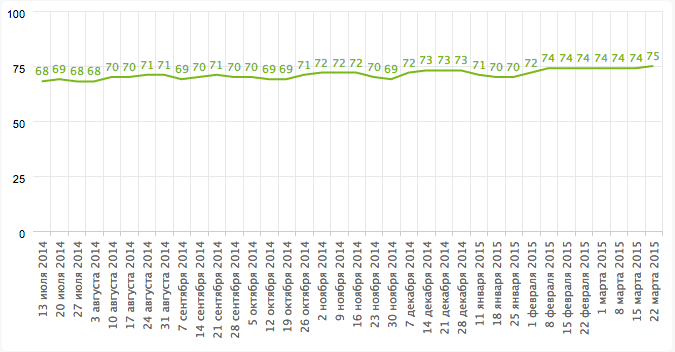 Here's the link to longer-dated series: http://bd.fom.ru/pdf/d12ind15.pdf and a snapshot from the same (I omit spoiled votes and those who are not planning to vote): 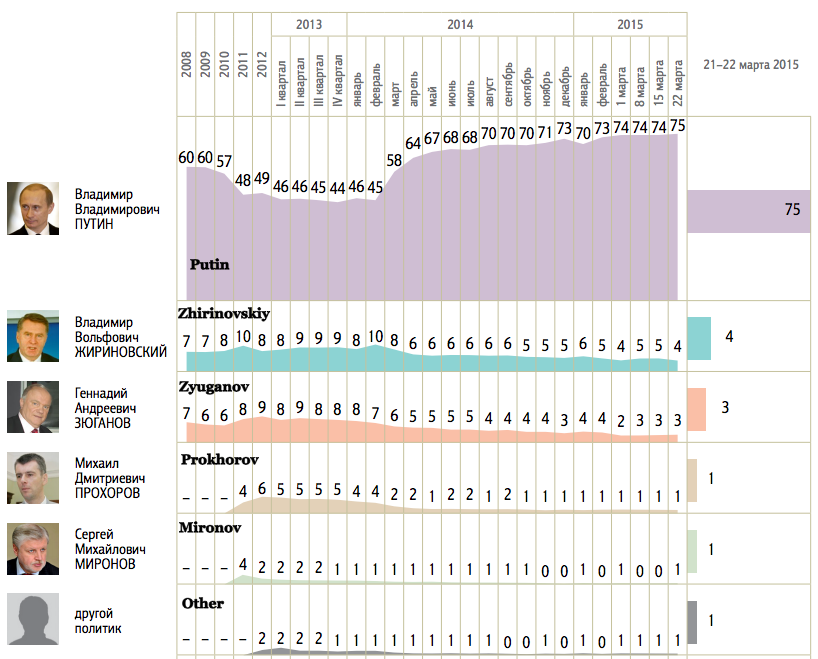 I have trouble spotting viable liberal opposition that can be supported by a democratic regime change. But may be I am just not seeing something... like it or not, but these are the numbers we have... 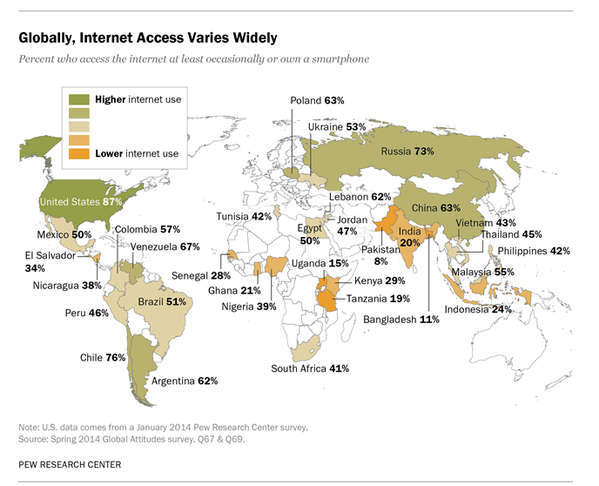 Which gets you thinking.

If Russian public opinion is down to Kremlin propaganda and media control, then how come Russians, enjoying wide access to internet, are not rushing to their web browsers for the alternatives presented  in the Western free press (including in Russian), the independent Russian press (which does exist) and in the new media (which is very rich, diverse and widely available in Russian)?

In the USSR days, when there was no internet and there was no access to foreign publications, media etc and when the Soviet authorities actively suppressed access to foreign broadcasts, while closed borders were enforced for the few who dared to smuggle in foreign press, many Russians tuned to these voices. I grew up regularly listening to the BBC Russian Service and Voice of America and Radio Liberty. Many of my friends and their families did as well. Apparently, today, the survivors of the same channels - available freely - have very little impact on Russian public opinion. Why?

Russian culture is culture of extreme scepticism over authority. Scepticism that borders on cynicism. And Russian culture is a culture of kitchen politics (in modern world perfectly facilitated by social networks and alternative media). Russians have access to these sources at a rate of access that is extremely high and open. And yet their views remain non-liberal in the Western context of this term.

Is today's state of traditional media control reinforcing what is already a prevalent Russian public view: the set of beliefs that are largely consistent with those espoused by the Kremlin? Is it possible that Kremlin is not necessarily actively altering the public opinion, but rather tailoring its own positions to that opinion, while reinforcing existent biases? Can it be that such tailoring of policies is more democratic than the liberal alternative that has no popular support in Russia?

In this, who wags what? The proverbial dog of Moscow, the proverbial tail of the nation or the bone of free media access dangled on the web?

The uncomfortable nature of this problem is that in the West, we are told to believe in the potency of the Russian liberal opposition (which has access to internet and uses it extensively to promote ideas, sketches of policies and even more actively - acts of protest and own image) and that this liberal opposition is democratically anchored. We are told that, were the opposition leaders given a chance, they would win democratic mandate from the people to change and reform Russia. We are told that once Putin is gone, Russia will embrace change led by the liberal opposition. And yet, where is the evidence to support any of this?

I sympathise with the principles and values espoused by some of the opposition leaders (not all, since there is a huge range of views these leaders hold). But, any serious observer of Russian politics and economics will quickly discover that the liberal opposition is incapable of providing a properly designed reforms agenda. I cannot find credibly structured and costed alternative budgets, legislative proposals, regulatory white papers etc - all that we, in the West, tend to associate with functional opposition. The opposition cannot even provide its potential base with a coherent core message, beyond the incessant talk about the need for more democracy, the need for drastic (but unspecified) anti-corruption reforms, and the need for more liberalisation of everything.

While the Russian Government can also be very sketchy on policies impact assessments ex-ante their adoption, at least it provides some data that can be used to measure their effectiveness in the medium term. Russian liberal opposition? Not much, if any.

Western democratic opposition parties publish own policies, own alternative budgets, factually comment on Government policies and produce alternative ideas that are tested in the public domain. Russian liberal opposition is predominantly pre-occupied with promoting itself to its own support base. When personality clashes abate for short periods of time, what is left in the public view is the talk about big ticket changes (opening up to foreign investors, achieving peace and partnership with the West, combatting corruption etc - all good ideas), but no tangible, specific, cost-benefit weighted proposals. The opposition can freely use internet to promote such analysis and proposals. It does not. Instead, it uses the web for sloganeering. An average Russian interested in, say, the expected impact of liberalisation of the domestic monopolies (or near-monopolies) on, say, unemployment is left with vacuum of data, estimates and insight. One cannot expect any, even remotely rational person, to vote for the opposition leaders promoting such a policy, unless that person is fully insulated from any potential fallout from it. Hence, the core support base for the liberals in Russia is... yes, the urban upper middle class

In other words, we, in the West, are being told to trust the dream that has very little basis in reality and feasibility, and despite alleged claims of democratic nature has very little support within the electorate. It all reminds us of the policy that promoted regime change in Iraq as the means for creating a functional democracy there, to be led by the liberal Iraqi opposition. It didn't happen thus, not because we didn't try, but because we couldn't find liberal opposition capable of governing. We based our expectations of Baghdad on a naive dream and we missed the real Baghdad by a mile. Ditto for Cairo, ditto for Tripoli, ditto for Kabul... keep counting.

Yes, Russia is not Iraq - neither philosophically, nor ethically, nor socially, nor economically, nor politically, nor historically, nor culturally, nor geopolitically. In all of these terms it is more complex, statehood and institutionally more developed and stronger. Which means the pretty dreams of the post-regime change nirvana are even more out of touch in the case of Russia than they were in Iraq.

In the Soviet days, people of Russia could have been excused for not actively pursuing the alternative because they didn't know better - they had no access to alternative media, internet and to Western 'voices'. Yet, they desired such access and sought it whenever it was available. Today, Russians support the values represented by Putin, even though they are not actively denied access to alternatives. It is uncomfortable for the Western ideologues of regime change, but it is thus.

Here are some of the opinion polls on public approval ratings for various Russian parties and politicians: 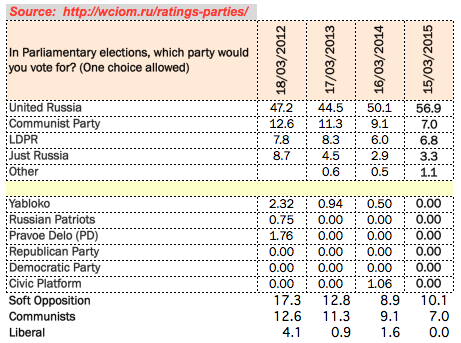 Yes, the hope of liberal opposition is clearly alive... in the minds of the West, but not in the minds of the Russian voters. About the only two - very remote - democratic choice alternatives per Russian voters are: Communists and LDPR (nationalists). The entire liberal alternative is about powerful enough (if they concentrated all their votes on Moscow alone) to win a couple of seats in the city government. 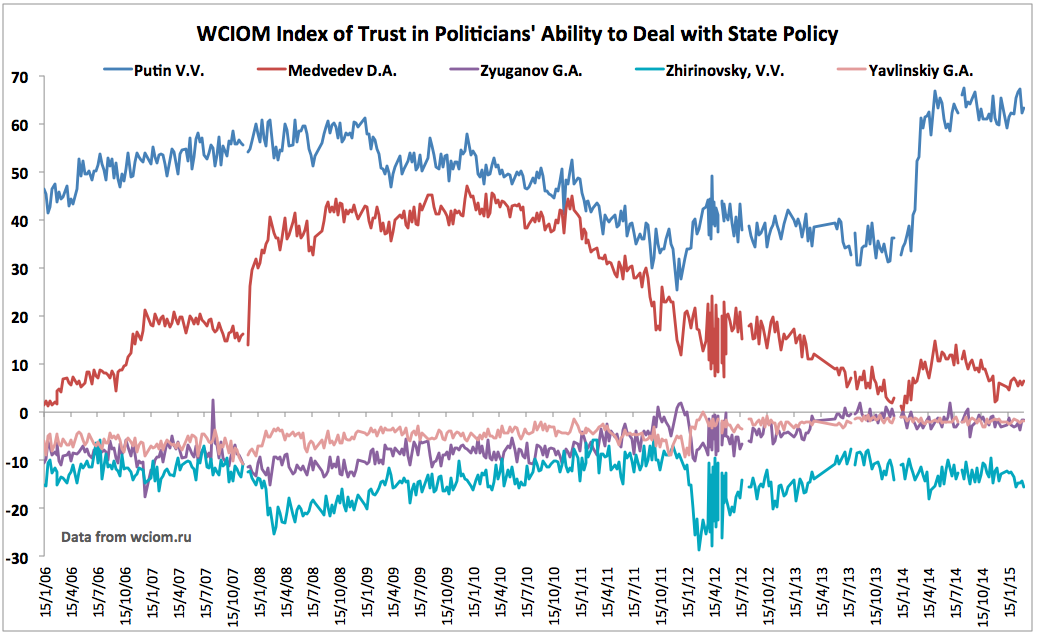 And once again, there is no sight of liberal alternatives anywhere in the positive trust territory. And, incidentally, none were present even before the Crimea and during the 'softer' power periods of the Kremlin rule. The entire political spectrum besides Vladimir Putin, even if it were to include Putin's closest allies, does not reach 34% of the voters in terms of trust.

Which brings us back to the first two facts: Russian voters have access to alternatives (even if imperfect, but certainly much wider than their access to the same during the Soviet era); no they do not support any of these alternatives. Firstly, as Hertzen once said: "Who is to blame?" and lastly. as Lenin put it: "What is to be done?"

Just some food for thought...