A new paper covering the history of the financial crisis in Ireland, from the media complacency perspective, has been published by the New Political Economy journal. "The Irish Newspapers and the Residential Property Price Boom" by Ciarán Michael Casey (see http://www.tandfonline.com/doi/abs/10.1080/13563467.2018.1426562) references my warnings about the Irish property market in 2005 comment to the Irish Times.

For completeness of the record, here is my 2004 article for Business & Finance magazine stating my, then, view on the property market in Ireland: http://trueeconomics.blogspot.com/2016/01/10116-my-2004-article-on-irish-property.html.

The residential property price index from CSO covering Irish property markets has posted second monthly contraction in February, falling from 80.3 in January to 80.0 last month. With that, y/y on growth rate in Irish residential property prices has slowed from 15.54% in January to 14.94% in February, the first sub-15% reading since September 2014. In effect, property prices in Ireland have now fallen back to the levels between September and October 2014. Cumulated gains in property prices over the last 24 months are now totalling 24.22% or an annualised gain of 11.46%, outpacing growth in the economy by roughly 5-fold. 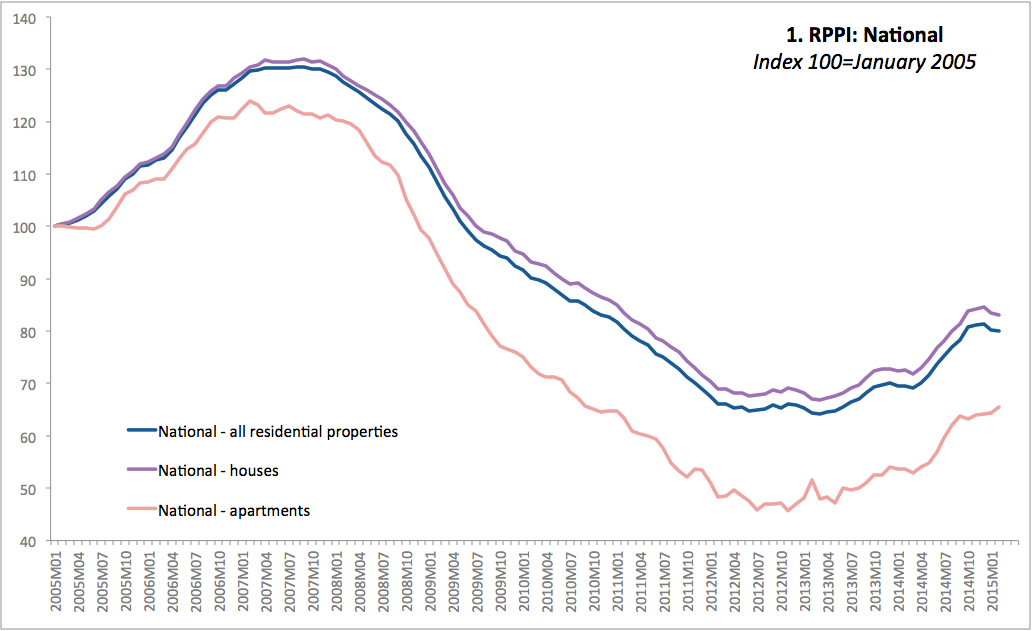 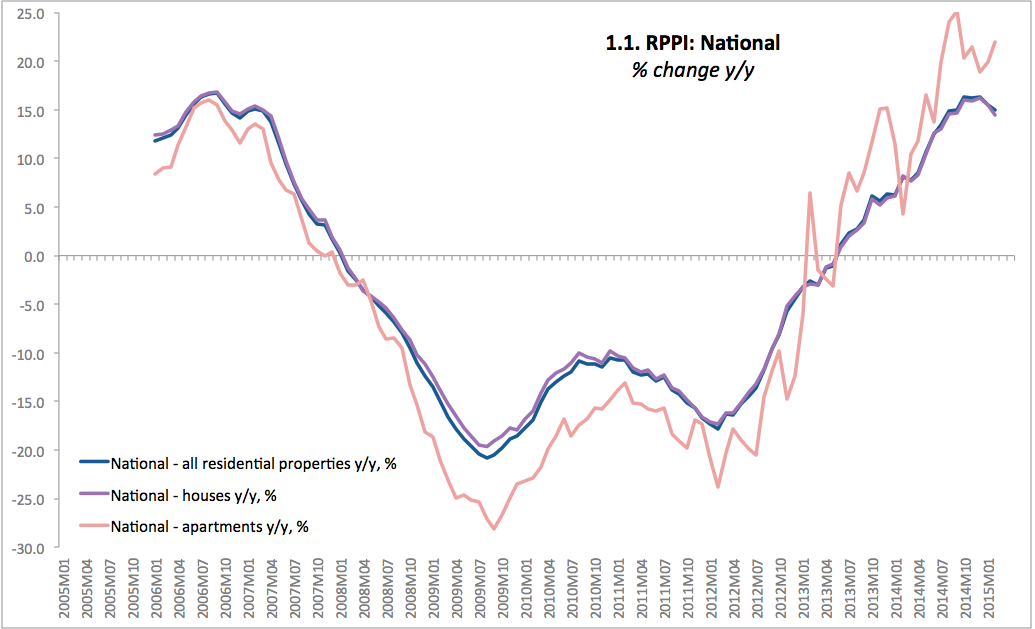 Prices of all residential properties excluding Dublin  remained static in February at 74.8, same as in January and up 8.25% y/y, marking a slowdown in the y/y growth from 9.20% recorded in January.


The decline in national prices was driven by Dublin prices, which fell for the second month in a row from 82.2 in January to 81.6 in February. This is the lowest index reading since September 2014 and marks a slowdown in y/y growth rates to 21.43% - the slowest rate of growth since April 2014. Still, cumulated expansion in Dublin residential property prices over the last 24 months is blistering 37.6% (annualised rate of 17.3%).

Few charts to illustrate the above trends: 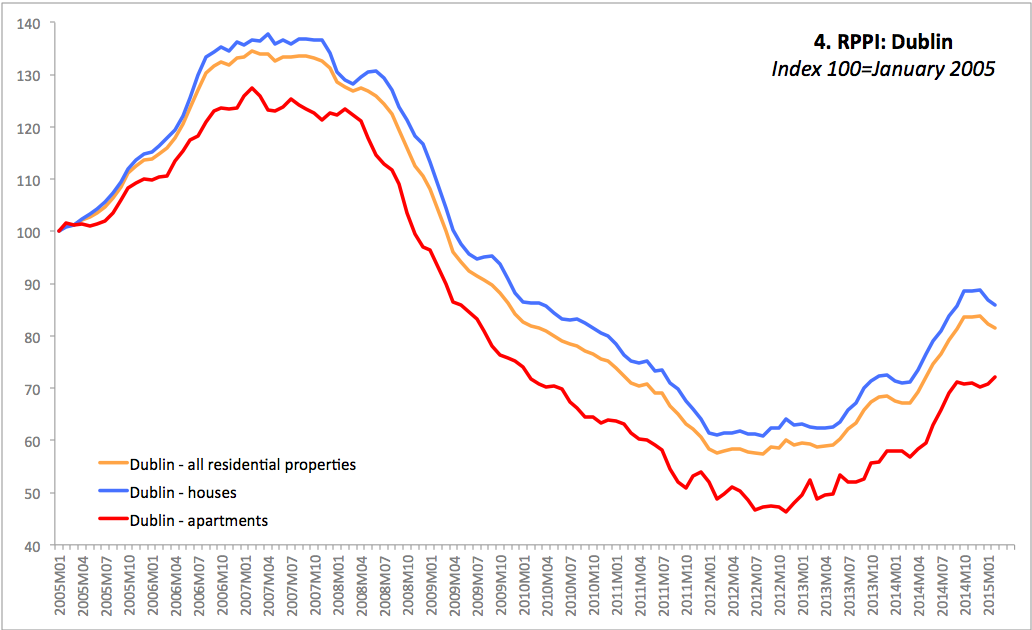 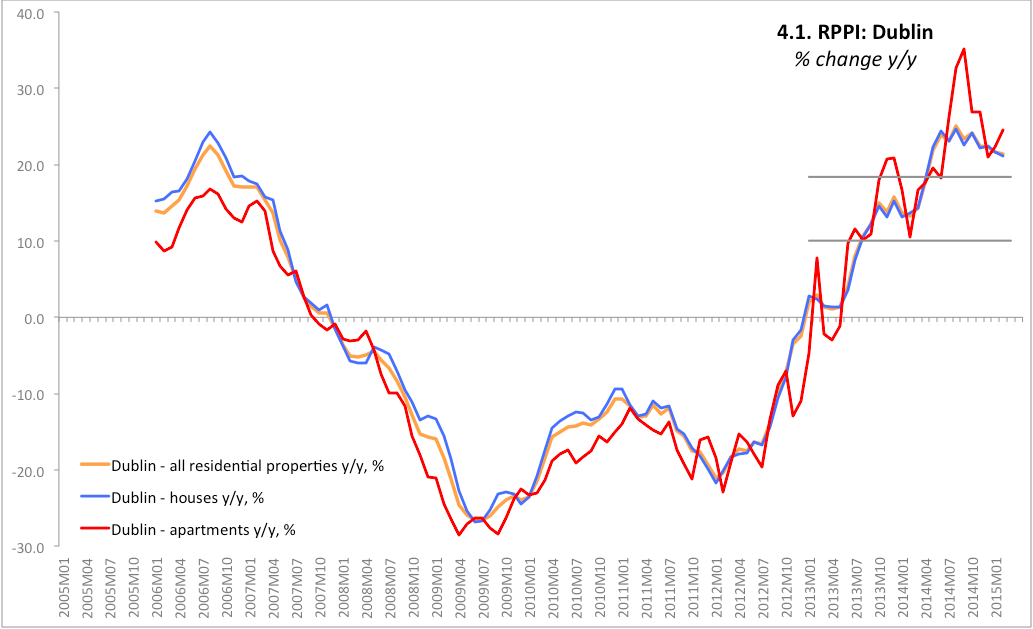 Lastly, summary of price changes on pre-crisis peak and y/y: 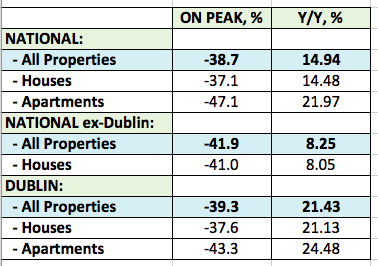 Despite all the talk about the new bubble in house prices in Ireland, three themes remain true: