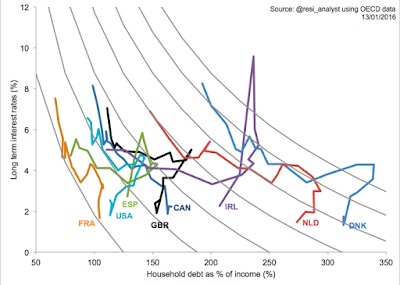 Irish progression is poor by debt measure, and is sustained (barely) by low interest rates, even post-deleveraging.

"Household balance sheets are healing gradually, yet loan distress remains high and over half of arrears cases are prolonged. Households have cut nominal debts by 20 percent from peak through repayments primarily funded by a 4 percentage point rise in their trend savings rate. Debt ratio falls have been large by international standards but debt levels remain relatively high at 177 percent of disposable income. Household net worth has risen 25 percent
from its trough." 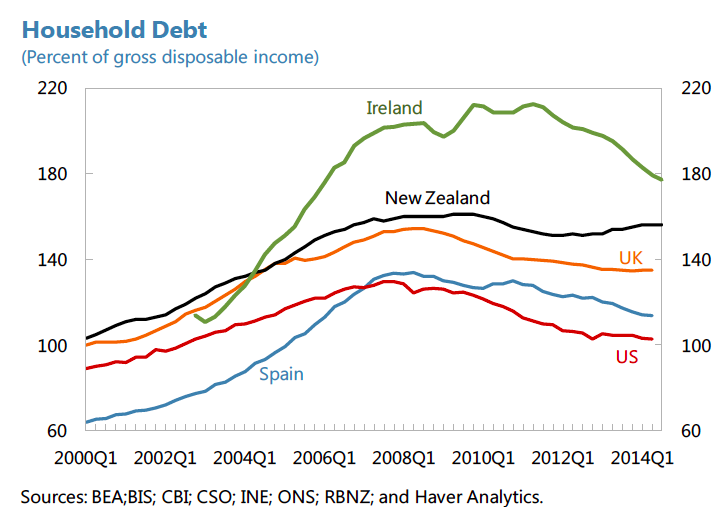 One note of caution: IMF statement ignores sales of household debt out of the Central Bank-covered statistics to vulture funds. Furthermore, repossessions, insolvencies, bankruptcies, voluntary surrenders and some mortgages restructurings have also contributed to the reduction in household debt. Thus, not all of the debt reduction is down to organic debt repayment by households.

It is also worth noting that per chart above, Irish household debt is currently at the levels of 2005-2006 - hardly a robust reduction on crisis-peak.

More from the IMF: "A recent survey finds household debts concentrated among families with mortgages, having 2 to 3 children, with the reference person aged 35 to 44, and in the two top income quintiles. Yet, their debt servicing burden is still similar to other groups, reflecting the high share of long-term “tracker” mortgages, with an average interest rate of 1.05 percent at end 2014."

The problem is that the recent survey IMF cites covers data through 2013 only! (http://www.cso.ie/en/media/csoie/releasespublications/documents/socialconditions/2013/hfcs2013.pdf).

All points I raised before and all points largely ignored by Irish policymakers.