Having looked at sectoral growth contributions for 1Q 2015 and trends in annual (y/y) growth rates in GDP and GNP, let's take a look at quarterly (q/q) growth rates. 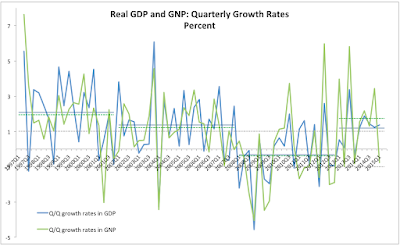 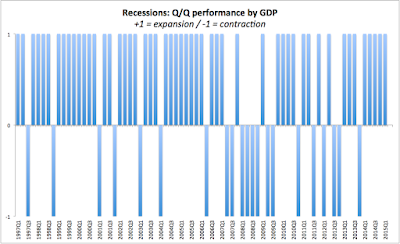 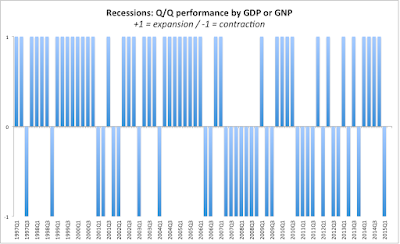 As promised in yesterday's post, I am continuing to cover the latest data on Irish National Accounts for 1Q 2015. In the first post, I looked at GDP at Factor Cost - the sectoral activity feeding into GDP headline numbers.

This time around, let's take a look at real GDP and GNP trends. 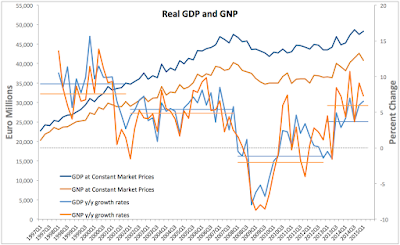 As long-term trends go, the chart below illustrates ongoing recovery in GDP and GNP 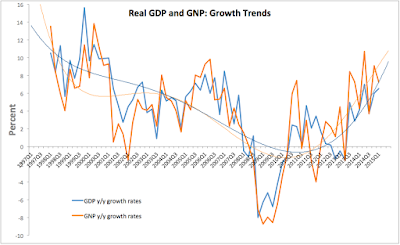 As far as the obvious point goes: there is a strong trend recovery in both series, which (sadly, I have to repeat this) is good news. One interesting thing to note is that trend for GNP recovery leads trend for GDP recovery. The reason for this is less pleasant than we like to think: instead of increasing contribution to activity from domestic economy, much of this lead is driven by changes in MNCs tax optimisation schemes, under which:


The latter point can be seen by looking at the relationship between GDP and net factor payments abroad, illustrated below in the form of declining share of GDP accounted for by profits & royalties repatriation abroad. This trend is likely to continue and accelerate as MNCs get to more aggressively use our latest tax 'innovation' - the knowledge development box. 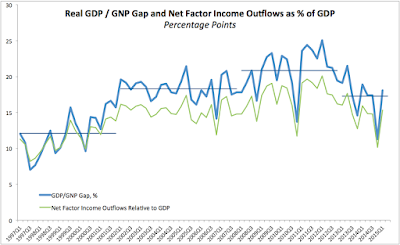 Thus, the chart above gives us some, very indirect, indication of how dodgy are our GNP statistics becoming. Though, more on that in subsequent posts.

In addition to the net income outflows, the chart above shows the trend of declining GDP/GNP gap. Current 1Q 2015 GDP/GNP gap is at 18.07%, against the average over 2013-present of 17.28% and a 3mo average of 15.58%, which suggests two driving factors: higher GDP activity and increased outflow of booked profits, alongside exchange rates effects. The latter factor is important as it further compounds multiple distortions in the data from the MNCs.

In summary, evidence continues to show strong growth performance both in GDP and GNP in real terms, with some lingering questions as to the nature of this growth in relation to the MNCs activities here.

The IMF has published its Article IV consultation paper for Ireland and I will be blogging more on this later today. For now the top-level issue that I have been covering for some time now and that has been at the crux of the problems with irish economic 'growth' data: the role of MNCs.

My most recent post on this matter is here: http://trueeconomics.blogspot.ie/2015/03/24315-theres-no-number-left-untouched.html

IMF's Selected Issues paper published today alongside Article IV paper covers some of this in detail.

In dealing with the issues of technical challenges in estimating potential output in Ireland, the IMF states that "Irish GDP data volatility and revisions make it difficult to assess the cyclical position of the economy in the short-run. Ireland’s quarterly GDP growth data are among the most volatile of all European Union countries, more than twice the variability typically seen."

The IMF provides a handy chart: 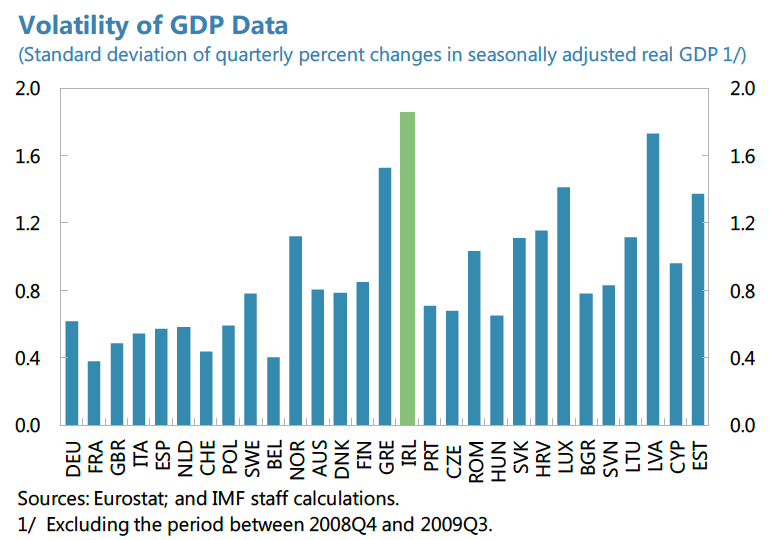 And due to long lags in reporting final figures, as well as volatility, our GDP figures, even those reported, not just projected, are rather uncertain in their nature: 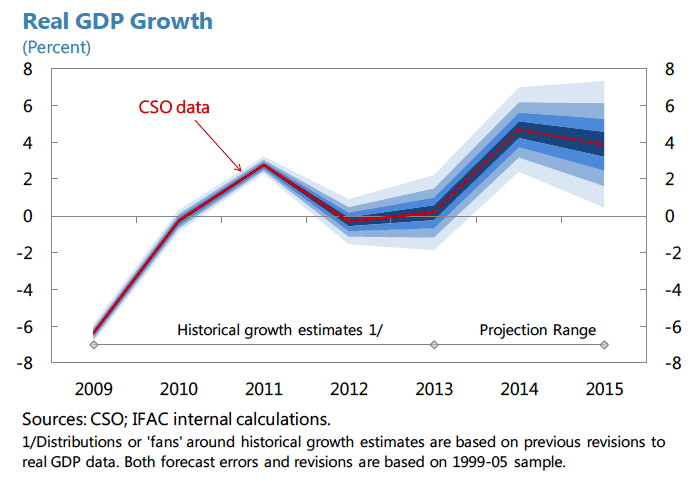 However, as IMF notes: other structural issues with the economy, besides poor reporting timing and quality and inherent volatility, further 'complicate' analysis:

"Multinational enterprises (MNE) accounting for one-quarter of Irish GDP can vary their output substantially with little change in domestic resource utilization. As shown in a recent study, MNEs represent only 2.1 percent of the number in enterprises in Ireland but slightly over half of the value added in the business economy. MNE output swings, sometimes related to sectoral idiosyncratic shocks (e.g., the “patent" cliff” in 2013...), can occur with little apparent change in
domestic resource utilization." 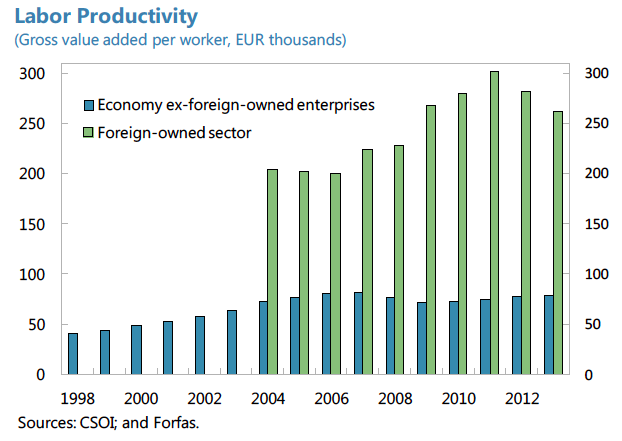 In other words, there is little tangible connection between output of many MNEs and the real economy. And the latest iteration of tax optimisation schemes deployed by the MNCs is not helping the matters: "The sharp increase in offshore contract manufacturing observed in 2014 is another example of such a shock. Such shocks to the productivity of the MNE sector may be best treated as shifts in potential GDP, because the result is a change in GDP without any significant change in resource tensions or slack in the
economy."

But MNCs are important for Ireland's tax base, right? Because apparently they are not that important for determining real rates of growth. Alas, the IMF has the following to say on that: "Swings in the value added of MNEs contribute substantially to variations in Irish GDP. Yet such swings are not found to have a significant effect on [government] revenues."


How big of an effect do MNCs have on the real economic growth as opposed to registered growth? IMF obliges: "The gross value added excluding the sectors dominated by MNEs behaves quite differently from aggregate GDP in some years. For example, in 2013 it grows by 3 percent at a time when official GDP data
were flat." In other words, the real, non-MNCs-led economy shrunk by roughly the amount of growth in the MNCs to result in near-zero growth across the official GDP.

However, since 2013 (over the course of 2014) a new optimisation scheme emerged as the dominant driver of manufacturing MNCs-led growth: contract manufacturing. IMF Article IV itself contains a handy box-out on that scheme, so important it is in distorting our GDP and GNP figures. Per IMF: "In 2014, multinational enterprises (MNEs) operating in Ireland made greater use of offshore
manufacturing under contract."

A handy CSO graphic illustrates what the hell IMF is talking about: 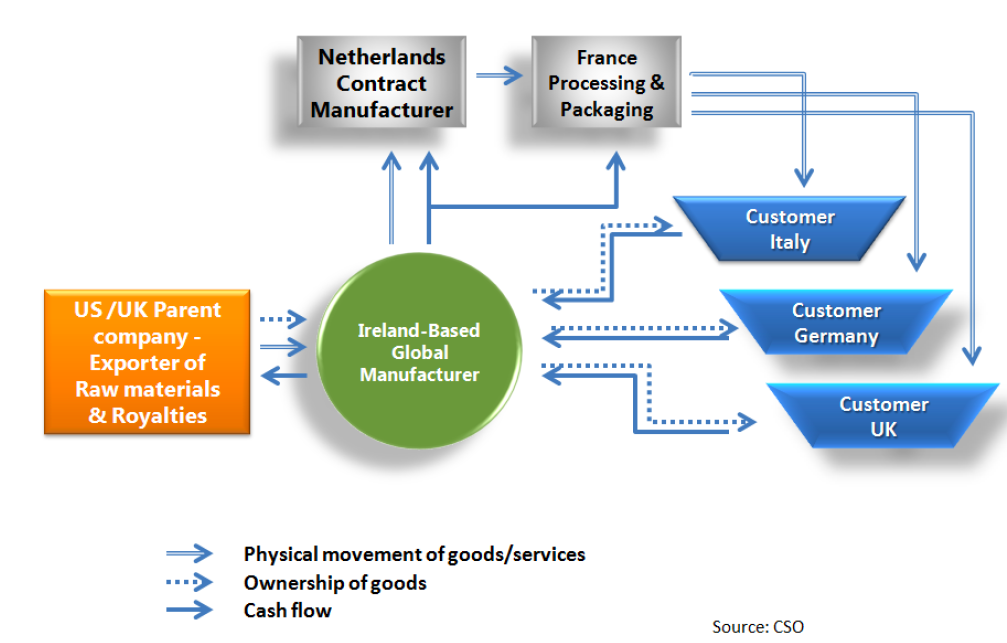 And to confirm my conclusions, here is IMF on the impact of contract manufacturing (just ONE scheme of many MNCs employ in Ireland) on Irish growth figures: "Contracted manufacturing appears to have had a significant impact on GDP growth in 2014 although it is difficult to make a precise estimate. Customs data on goods exports rose by 2.8 percent y/y in volume terms in the first nine months of 2014. In contrast, national accounts data on exports rose 12 percent in the same period. The gap between these two export measures can be attributed in part to contracted production, but could also reflect other factors like warehousing (goods produced in Ireland but stored and sold overseas) and valuation effects." Note: I cover this in more detail in my post.

One scheme by MNCs accounts for more than 2/5ths of the entire Irish 'miracle of growth'. Just one scheme!

And now… to the punchline:

Update: Seamus Coffey commented on the 2013 figure for domestic (real) economy cited above with an interesting point of view, also relating to the broader issue of the Contract Manufacturing: http://twishort.com/DTShc and his blogpost on the subject is here: http://economic-incentives.blogspot.ie/2015/03/the-growth-effect-of-contract.html