The World Bank outlook, released on January 14th is a bit less gloomy when it comes to 2016. Per World Bank, "sustained low oil prices will weaken activity in exporting countries. For example, the Russian economy is projected to contract by 2.9 percent in 2015, getting barely back into positive territory in 2016 with growth expected at 0.1 percent." World Bank oil price assumption is USD66 per bbl.

EBRD notes that "Geopolitical risks from the Ukraine/Russia crisis remain significant, although they are contained for the time being." According to the bank, "Russia is projected to slip into recession, with GDP contracting by close to 5 per cent."  On more detailed assessment, EBRD says that: "In Russia, lower oil prices have compounded the effect of deep-seated structural problems, increased uncertainty and low investor confidence, along with the increasing impact of economic sanctions imposed since March 2014. In the first three quarters of 2014 investment continued to decline, consumption growth decelerated to below 1 per cent, and imports dropped by 6 per cent in real terms. Capital outflows more than doubled to an estimated US$ 151 billion in 2014. As a result, the rouble has lost almost half of its value in 2014 vis-à-vis the US dollar and Russia lost about a quarter of its international reserves, ending the year at around US$ 380 billion (including the less liquid National Welfare Fund). Markets were particularly shaken in late November/early December 2014, and the central bank had to raise its policy rate to 17 per cent to stem pressure on the currency. The government provided additional capital to a number of banks, temporarily relaxed certain prudential requirements for banks, and introduced measures to increase the supply on the foreign exchange markets by state-owned companies and put in place additional incentives for de-offshorisation."

An interesting footnote to the analysis is covering remittances from Russia. "Remittances from Russia to Central Asia and the EEC continued to decline (see Chart below). Partial data for the fourth quarter in 2014 suggest that the decline is likely to have accelerated in recent months, entering two-digit percentage rate territory, as the Russian economy weakened and the sharp drop in the value of the rouble reduced the US dollar (and also local currency) value of the remitted earnings. Lower remittances inflows will affect consumption adversely and likely add to downward pressures on a number of currencies in EEC and Central Asia, which also face reduced export demand and investment flows from Russia." 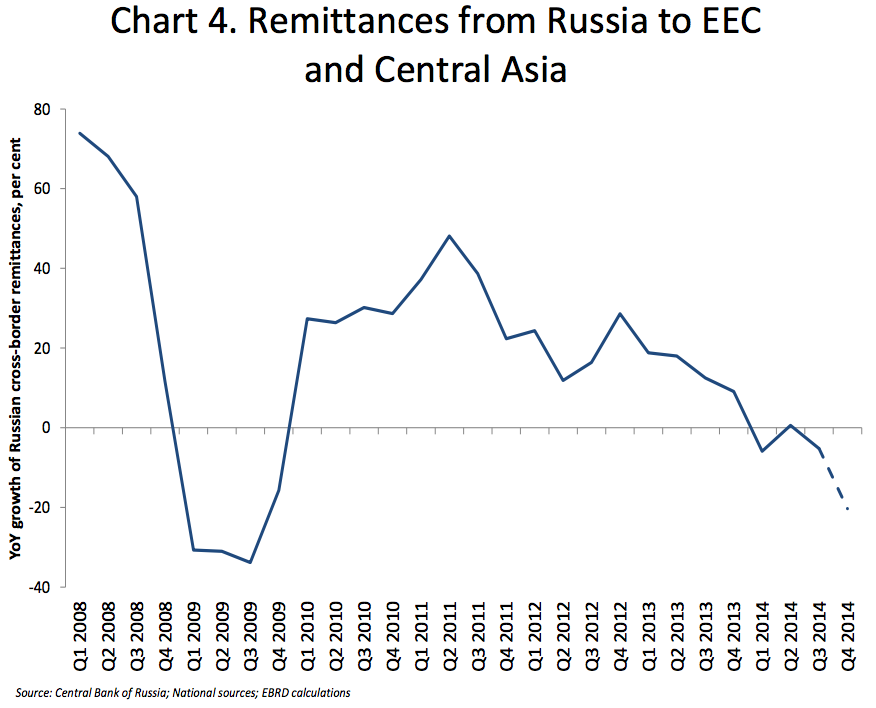 Crucially, EBRD forecasts also reflect downgrades on September 2014 outlook. EBRD now estimates 2014 growth to be at 0.4% (more gloomy than IMF estimate and down on 9.6% estimate at the end of Q3 2014), with a contraction of 4.8% in 2015, which represents a downgrade of 4.6 percentage points from September forecast. EBRD oil price assumption is around USD57-59 per bbl. 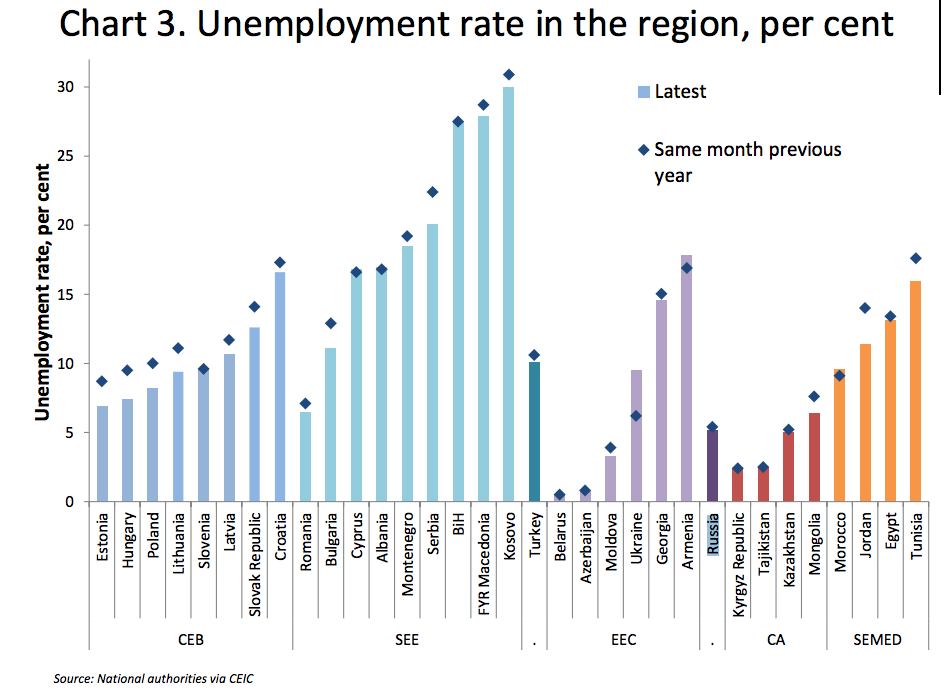