Monthly v annual, downside v upside... when it comes to rates of change, COVID19 is a good reminder of how hard, intuitively, arithmetic can be...

Take Irish retail sales. Gloriously, monthly changes in retail sales are booming, up 29.5% m/m in volume and 28.4% in value. A 'V-shaped' thingy. Un-gloriously, year on year the sales are 26.6% in volume and 29.1% in value. But here's the ugly thingy: suppose a year ago you were retailing 1 unit (in volume or value). Annual rate of change in these was around 2.55% over 2016-2019 for value and 4.4% in volume. Which means you were 'rationally' expecting to be selling 1.0255 units in value and 1.044 units in volume around this time 2020. You are selling, instead 0.705 units in value and 0.734 units in volume. You have, prudently, planned your investment and spending allocations, based on similar expectations. Your reality is that you are down 31.3 percent on where you were supposed to be in value and 29.7 percent in volume. Notice the 'wedge' between volume and value. Deeper deterioration in value than in volume means not only that your revenue fell off, but that you are working harder to deliver on what revenue you do derive. In basic terms, you now need to be selling roughly 5 percentage points more of volume to derive the same euro value. 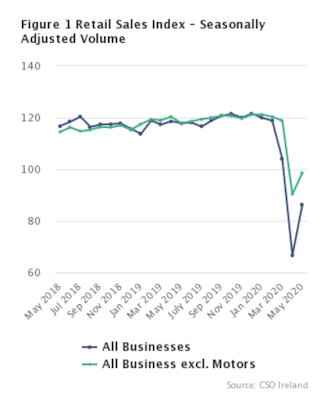 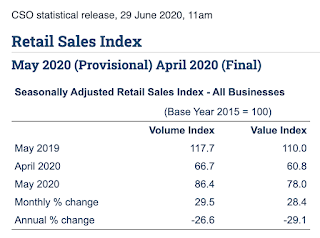 In simple analogy terms, you are trying to swim back to shore in a gale-force head wind, with a 12 feet swell, and against a roaring riptide. But otherwise, it's a 'V-shaped' looking thingy...

Data through April 2020 on U.S. Retail Sales is in, so here are two charts: 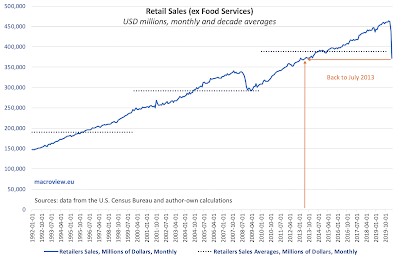 Meanwhile, jobs losses in the Retail Sales sector have been dramatic as well: 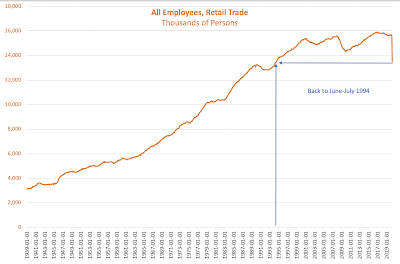 Employment in Retail Sales sector fell 2,127,000 in the first two months of the COVID19 pandemic compared to year prior, with April employment declining 2,111,000 or 13.5%. Overall sector employment numbers at the end of April stood around the levels last seen in 1994, effectively erasing any employment gains made over 26 years.

Good thing all the workers in the sector are at least seeing recovery in their stocks portfolios. Otherwise, there could have been social unrest, you know...

My own contribution to the event is here: https://www.youtube.com/watch?v=XRR4KwtIYuE. I am looking at 7 key themes of the future in consumer demand, driven by geography of growth, technology and consumer demographics.

Good thing Consumer Confidence is booming in Ireland, cause otherwise we might get a wind that domestic demand for goods and services is going nowhere: 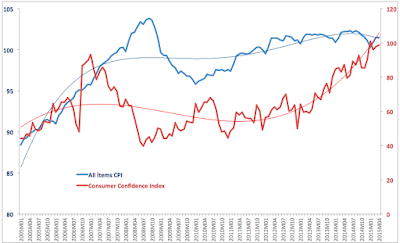 Now, how would we get such an idea. you might ask? Well, simples.com : take a look at consumer prices: 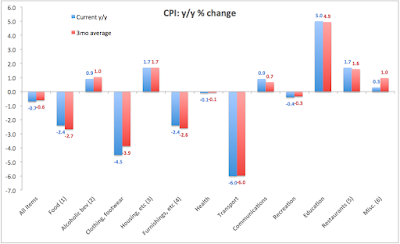 And in case you want to see what 'sustains' at least some semblance of non-totally-collapsing prices? Why here it is:

Well, the only reason we are not a complete basket case come inflationary dynamics is thanks to tobacco and alcohol (up whooping 26.5% over the pre-crisis average thanks to tax extraction by the State), and electricity and rents (pushing housing, water, electricity, gas etc up 7.1% over the pre-crisis levels - you might also call that tax extraction, for much of these increases goes to fund semi-states and quangos and soon-to-come Irish Water), Health (where much of the 'savage cuts' were just something masking the actual hikes in cost of services to those of us who pay for them), and Education (where state extraction of funds was so rampant as outpace by a factor of 10 overall inflation in the economy), and Restaurants & Hotels (where the cut in Vat did nothing to alleviate price pressures on consumers), and a bunch of state-related and regulated prices that went into Miscellaneous category.

And so just as with retail sales, deflation is now consistent with rising consumer confidence. Happiness attained, at last. Just never ask what happens to demand when prices (imported from the rest of the Euro area) start creeping up across all sectors... that is something polite Irish economy forecasters don't want to talk about... 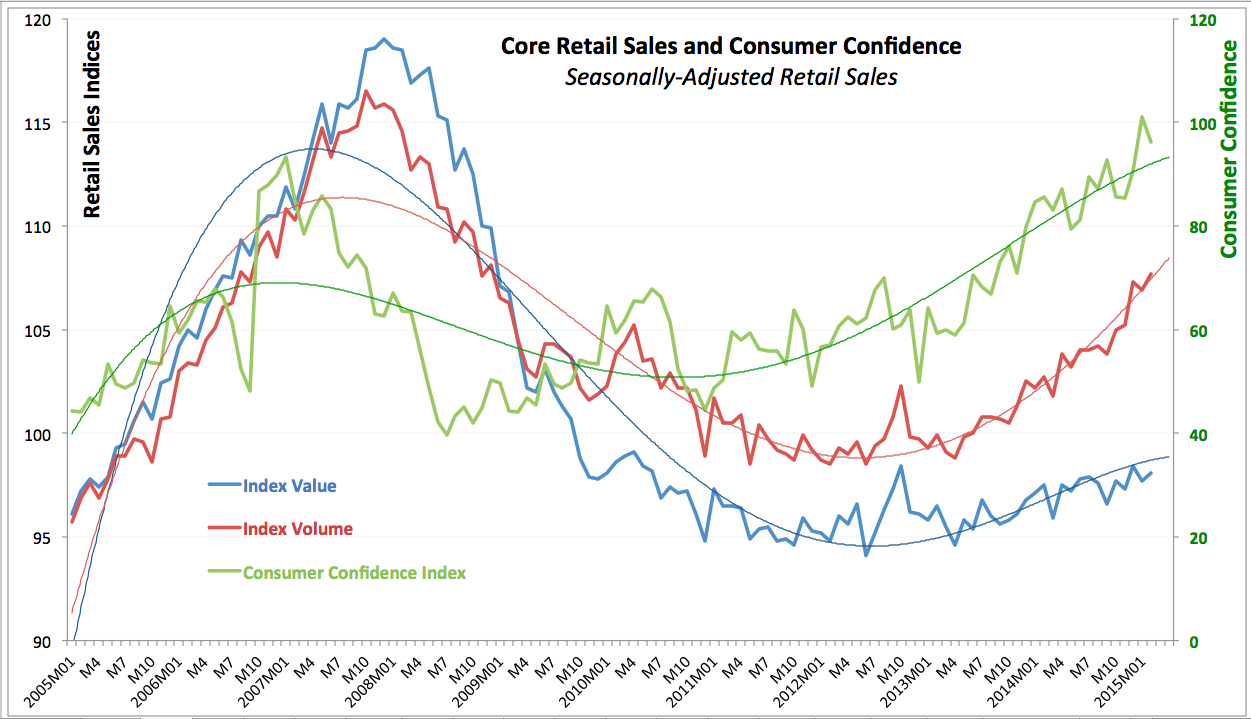 As chart above clearly shows, the divergence between the Consumer Confidence Index and Value of retail sales activity remains in place, while Volume index is co-moving with the Confidence indicator. (more on this below). 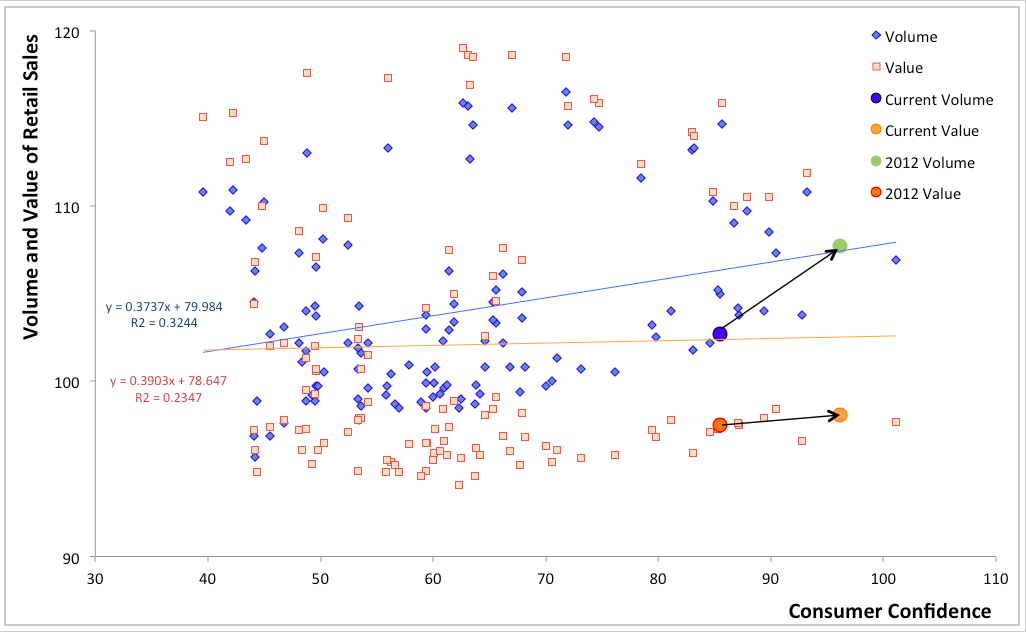 Overall activity in the retail sector, however, is still improving. The chart below shows my own Retail Sector Activities Index (RSAI) that takes into the account trends in volume and value indices, plus the trend in consumer confidence. Currently, the main drivers for this improvement are: deflationary dynamics boosting volumes of sales and still elevated readings for Consumer Confidence. 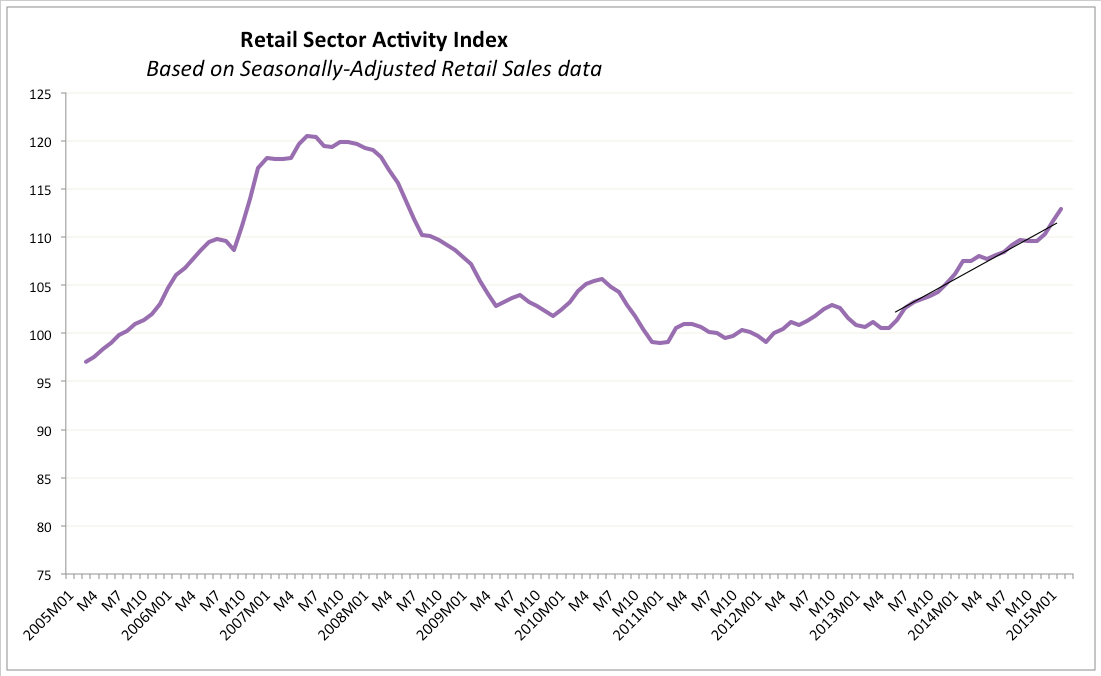 However, rates of growth in both Volume and Value indicators are weaker than pre-crisis averages and are worryingly weak in Value terms (remember, retail sector profits and employment levels are predominantly the functions of value of sales, not volume of sales): 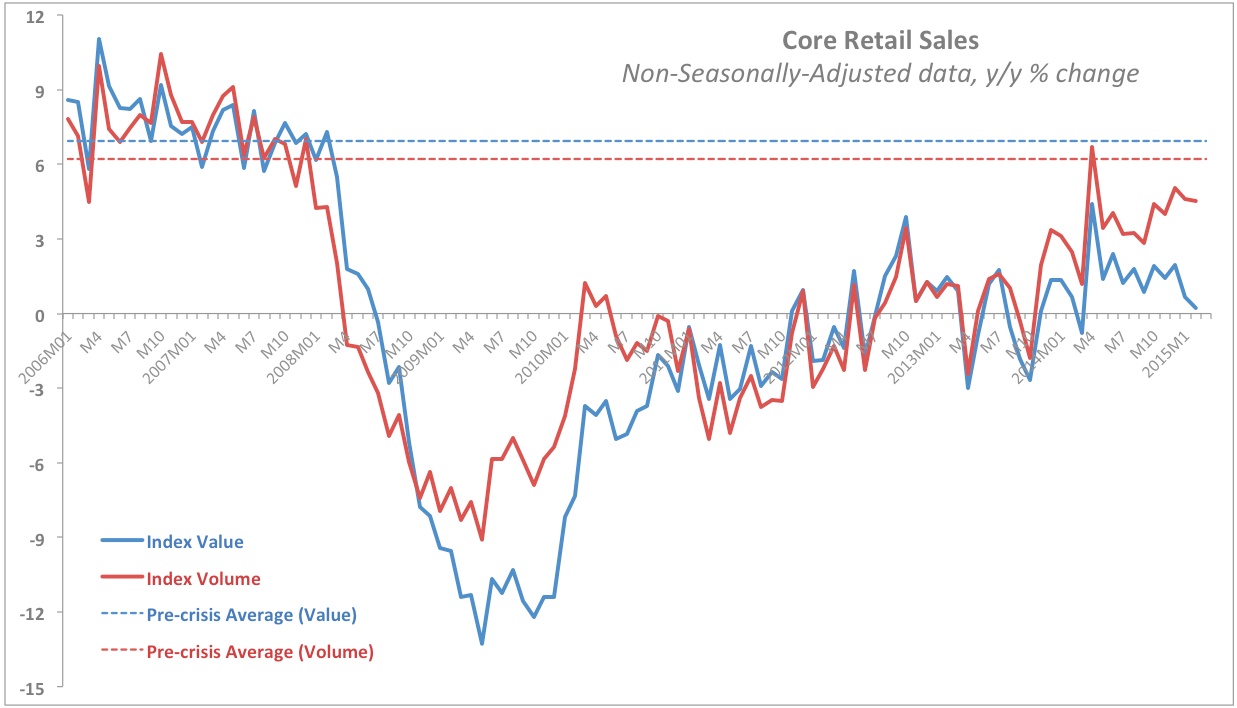 Finally, onto correlations: table below sums up correlations for each index, showing negative correlations between Consumer Confidence Index and Value and Volume of Retail Sales indices for the period from June 2008 through present (from the start of the crisis). It is worth noting that correlations have moved into positive territory from around 2012 on, although the latest readings suggest some temporary weakening of these.

Conclusions: setting aside Consumer Confidence readings, value and volume of retail sales indices are rising. However, as in previous months, increases in volume of sales are not matched by increases in value of sales, suggesting that overall sector activity improvements are driven primarily by deflationary price dynamics and only in the second order by improving demand. According to Consumer Confidence, we have been back in 2007 levels of activity since the start of Q2 2014. This is simply not supported by the annualised growth rates recorded in both Volumes of sales and Values of sales. Meanwhile, the levels of sales indices remain deeply below their pre-crisis peak readings and in value of sales terms, below pre-crisis average.
I will look at sub-sector decomposition of the retail sales indices performance once we have data for March, so we can strip out monthly volatility and look at quarterly comparatives.