What concentration risk and liquidity risk can do to you when both combine? 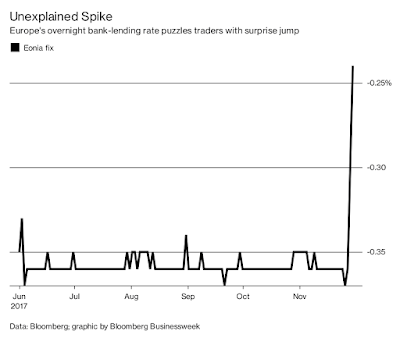 Eonia (Euro OverNight Index Average) is the 1-day interbank interest rate for the Euro zone. In other words, it is the rate at which banks provide loans to each other with a duration of 1 day (so Eonia can be considered as the 1 day Euribor rate). In other words, it is a measure of short-term liquidity.  Eonia is an average of actual rates charged, so it is, in theory, a reflection of the market demand for short term liquidity. But Eonia is a tiny market, trading normally daily at around EUR7 billion or less. And in a tiny market, there can be a sudden shift in trading volumes. This is what happened on Wednesday and Thursday. Eonia rose from -0.36 basis points on Tuesday to -0.30 bps on Wednesday to -0.24 bps on Thursday.

Eoinia's volumes are 90% direct borrowing by prime banks (and the balance is brokered), so a handful of large institutions use the market to any significant extent. Which induces concentration risk. Worse, Eonia is a secondary/supplementary market, because the ECB currently provides extremely cheap liquidity in unlimited volumes on a weekly basis. Which is another risk to Eonia, as it is thus set to absorb any short term variation in liquidity demand (below 1 week).

Bloomberg speculated that "The most likely explanation is a technical hitch, rather than some sudden crisis warning. The cause of the spike could be a U.S. financial institution that has switched its year-end accounting period from Dec. 31 to Nov. 30. This may have driven a sudden need for short-term liquidity, thereby causing a squeeze. It was month-end for many financial institutions on Thursday, on top of which we are approaching year-end periods, when cash and collateral rates often get squeezed. A bit of indigestion shouldn’t be a surprise. But a move this big is."

If Friday close gets us back toward Tuesday opening levels, the glitch might just be a glitch. If not, something might be happening beyond 'technical' hitches.

The strangest bit is that the move signals a potential liquidity squeeze in a market that has, if anything. too much liquidity. And the matters are not helped by the shallow trading volumes, that imply a concentrated move.

Something to watch, folks, if anything - for just another illustration of the concept of correlated risks.

Take a look at the latest Eurostat data:

Even after all statistical 'methodology' re-jigging and re-juggling, Q1-Q3 2014 saw Government spending accounting for 49.5% of GDP and deficit averaged 2.43% of GDP. Meanwhile, debt/GDP ratio stood at 92.1% of GDP excluding inter-governmental loans (2.4% of GDP):

Yields on Government bonds are hitting all-time lows, including for 'rude health' exemplars such as Spain and Italy:

Clearly, liquidity is not  a problem for European sovereigns. But pumping in more liquidity into the euro system might just become a problem: the lower the yields go, the higher the debt climbs. With this, the lower will be the incentives for structural reforms, and the higher will be the debt overhang. All the while, without doing a ditch to repair the actual crisis causes: excessive legacy debts in the households' and corporates' systems.

Meanwhile, the press is lavishing praise on the ECB's Mario Draghi for... well I am not quite sure what is being praised: Mr Draghi is planning on doing in March 2015 what the Fed, BofE, and BoJ have been doing since (on average) 2009, albeit he is facing German (and others') opposition.

Being 6 years too-late into the game, Mr Draghi, therefore, is equivalent to a lazy and tardy student who finally showed up for the class after all other students have left, but bearing an elaborate excuse for not doing his homework.