Last month, I wrote an editorial for @MarketWatch on the declining fortunes of the American wage earners. And this week, the BLS released new data on wage growth in the U.S. economy. The new numbers are 'shiny'.

Per headlines reported in the media, the BLS reported that the annual increase in Average Weekly Earnings was an impressive 2.9%, which is:
This is a great print. Except, it really is not all that exciting, when one reaches below the surface.
Take the following summary of recent growth rates (H/T @BySamRo): 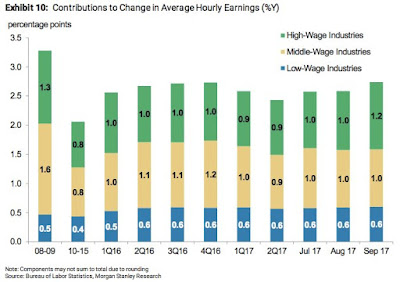 September 2017 wage increases are still below 2008-2009 averages for all wage earners, except for low-wage industries. The gains 'break out' drivers are in high-wage industries, where growth has risen 20% compared to much of the 2016-present trend. Overall, growth rate is well below 2008-2009 average of 3.4%.
To see how much more poor the current 'spectacular' print is compared to the past trends, look at longer time series: 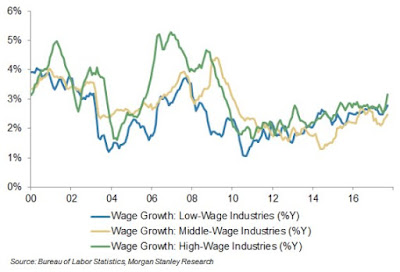 Low-wage industries wages inflation is running close to pre-crisis average, since roughly the start of 2017. Good news. High and meddle-wage industries wages inflation is running below the pre-crisis average still. We have had roughly 8 years in the current trends, meaning that a large cohort of current workers have entered the workforce with little past gains in wages under their belt. This means a very brutal and simple arithmetic: many workers in today's economy have never experienced the gains of pre-crisis magnitudes. Wage increases are cumulative or compound in nature. Wage increases slowdown is also cumulative or compound in nature. Hence, workers who entered the workforce from around 2004 onwards have had shallower cumulative gains in wages than workers that preceded them. Guess what else do the former workers have that differentiates them from the latter? Why, yes: 1) higher student debt; 2) higher rent costs; 3) greater risk- and age-adjusted health insurance costs, and so on. In other words, for the later cohorts of workers currently in the workforce, lower wages increases came at a time of rampant increases in non-discretionary spending costs hikes.
To say that today's BLS wage inflation print is great news is to ignore these simple facts of economics: to restore wages to pre-crisis trends - the trends that would allow for the return of the Millennial generation to pre-crisis expectations (or to the cross-generational income and wealth growth patterns of previous decades), we need wages growth rates at 5-percent-plus not in one or two or three months, but in years ahead.  The 2.9% one month blip in data is not the great news. It might be a good news piece, but it is hardly impressive or convincing.
And that figure of 5%-plus hides yet another iceberg, big enough to sink the Titanic: given that the Millennials are carrying huge debts and are delaying household formation in record numbers, 5%-plus wage inflation will also hit them hard through higher interest rates and higher cost of debt carry.
This puts your average news headline relating to 2.9% annual increase in wages September figure into a correct, life-cycle perspective.
Want to understand why the US Economy adding jobs is not translating into the US workers gaining wages? Here's a handy PBS report worth reading: http://www.pbs.org/newshour/making-sense/why-you-shouldnt-expect-wages-to-rise-any-time-soon/

Update: an interesting take on the ongoing US economic slowdown from the BusinessInsider: http://uk.businessinsider.com/2015-has-broken-everyones-assumptions-so-far-2015-4?r=US. Note the Atlanta Fed estimate of zero growth in Q1. Weather might be the case. Oil prices, however, are bogus scape goat. Here's a chart showing that the US in fact is  the driver for lower oil prices: 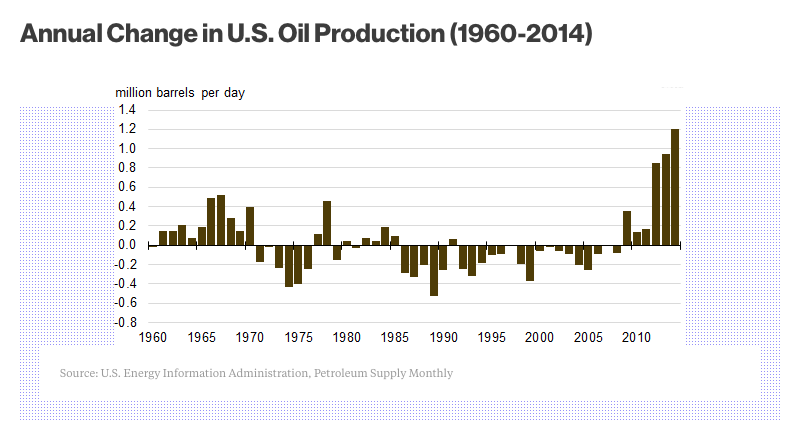 H/T for that to @business