Today's ECB announcement of EUR60 billion per month from march 2015 through September 2016 QE aiming to take the ECB balance sheet up to EUR1.14-1.26 trillion (estimated, based on starting timing and treatment of 12% share of European institutions securities) has been dubbed a massive boost to the euro area, a watershed, a drastic measure and so on.

In truth, it is neither.

Quantum of Asset Purchases and Types of Assets

The measures are sign of desperation and frustration on ECB behalf. And not with the persistence of deflationary risks.

Instead, QE announcement was accompanied by another round of 'fighting' rhetoric from Draghi, who clearly continues to push member states and the European Commission to aggressively pursue structural markets reforms.

Draghi downplayed expectations for QE by stressing that QE only provides conditions to support growth. In his own words: "Monetary policy can create basis for growth but it's up to governments and Commission to make sure growth actually takes place". In so far as absent growth there won't be inflation, we, therefore, have a perfect excuse ex ante for any QE failure.

The key, however, is that we are now into the unchartered territory of watching the emergence of the second round effects of QE announcement.

The reason for this is that the direct impact - lowering Government borrowing costs - is effectively useless - the euro area as a whole is already enjoying record low yields. Meanwhile, market expectations of inflationary pressure over the longer horizon (e.g. 5yr/5yr spreads) are starting to price higher inflation, albeit modestly so.

Mr Draghi's claim that the measure is aimed at supplying liquidity is a red herring - a token nod to the German hawks. In reality, most likely, the QE will not unleash a wave of new credit creation.

More likely, we shall see some easing of deflationary risks, with inflation picking up in the medium term on foot of both QE and oil prices reversion back toward fundamentals-justified levels. Euro devaluation will also help to cover up underlying structural drivers for deflationary risks.

The real causes of deflationary risks in the euro area is weak demand. The latter is driven by collapse in after-tax household incomes and savings, and by the ongoing deleveraging of the households and firms. None of these can be helped by the QE.

Meanwhile, the QE is likely to provide some easier conditions for issuance of new Government debt. Currently, just under 50% of the euro area economy is accounted for by the Government spending. Pumping more spending into this economy is unlikely to do much for future growth and is hardly going to trickle down to the ordinary households. Which means that the entire QE exercise is dubious in nature. It will, however, significantly pads the pockets of bonds dealers and stock markets, and banks that hold these securities.

One caveat few noticed is that the ABS segment of the QE programme now falls under the remit of the NCBs. Which means that national authorities can select assets for purchases from the private sector. How this mechanism can prevent selection biases to, say, potentially favour so-called National Champions (larger state-owned entities and private monopolies) or corrupt selection of politically-connected enterprises and other similar behaviour is anyone's guess.

The circus surrounding the ECB announcement was (and remains) quite bizarre. The ECB announced effectively new (as in unknown to us before) measures to the quantum of roughly EUR114-260 billion, since it already previously set a target of ca EUR1 trillion balance sheet expansion.

Even more bizarrely, we know many details of the QE mechanism, but we have no idea as to the split between the sovereign bonds purchases and private asset purchases. We have no defined limit to the balancesheet expansion and we do not have a defined process for ending the programme (sudden stop or tapering).

As I tweeted today, a viable alternative to the largely dubious QE would have been supporting household incomes and companies investment. This can be done more effectively via targeted and structured tax policies that are medium-term revenue neutral. One example, coincidentally, provided today in FT by Martin Feldstein: http://blogs.ft.com/the-exchange/2015/01/16/martin-feldstein-beyond-quantitative-easing-in-the-eurozone/

In the medium term, the key should be using monetary policy and fiscal policy to deleverage the economies: households, companies and governments. This is not being helped by the QE. Here is an interesting recent paper on the subject: http://www.bis.org/publ/work482.pdf.

In the long run, the key is finding real new catalysts for growth in the euro area that can compensate for the structural and demographic declines the EMU economies are suffering from. This too is not being helped by the QE.


Update 1: Here is the proportion by which ECB will allocate purchasing allowances for each NCB: 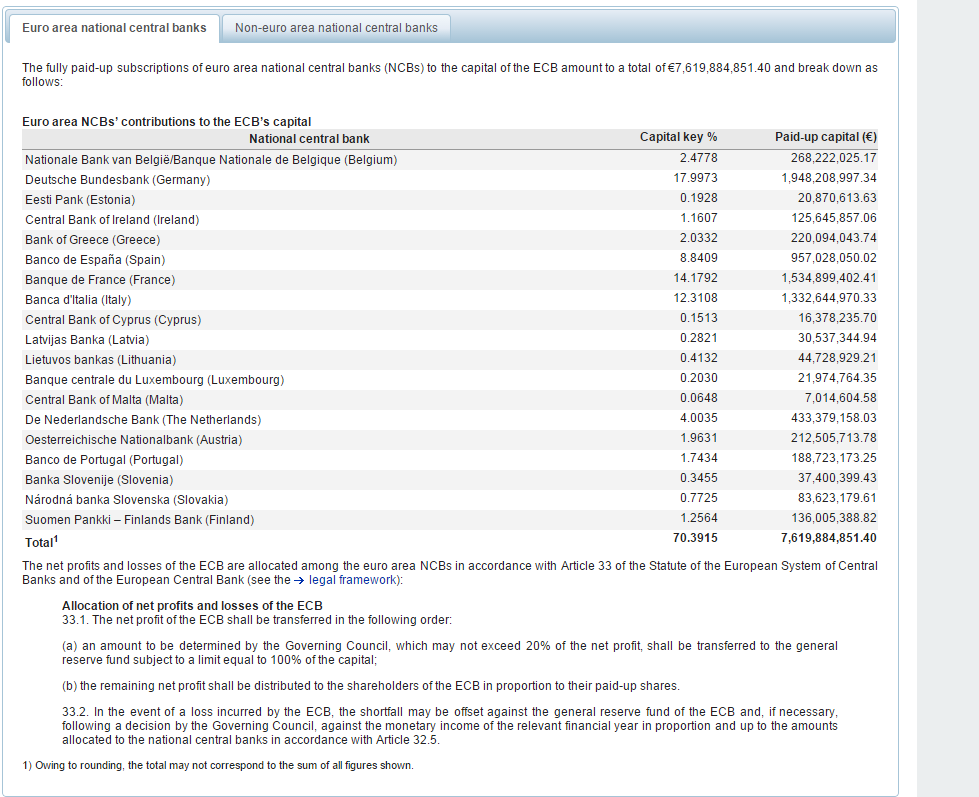 Update 2: And here is yet another reason why ECB's QE might not be the 'big bazooka' that will end markets fragmentation (aka increase credit supply to the real economy) - read bottom tweet first: 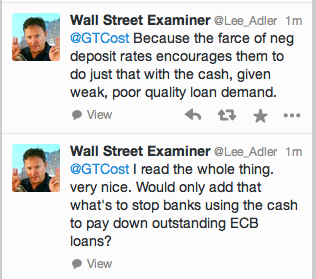