Recently, I have highlighted couple of signs of emerging weaknesses in the U.S. economy relative to the positive news momentum in the euro area. You can see Manufacturing Sector evidence here and Business Activity evidence here. Meanwhile, economic surprise indices have also been pointing to the same: here.

An interesting chart from Pictet summarising the trend by plotting Economic Surprise Indices for euro area and the U.S. side by side: 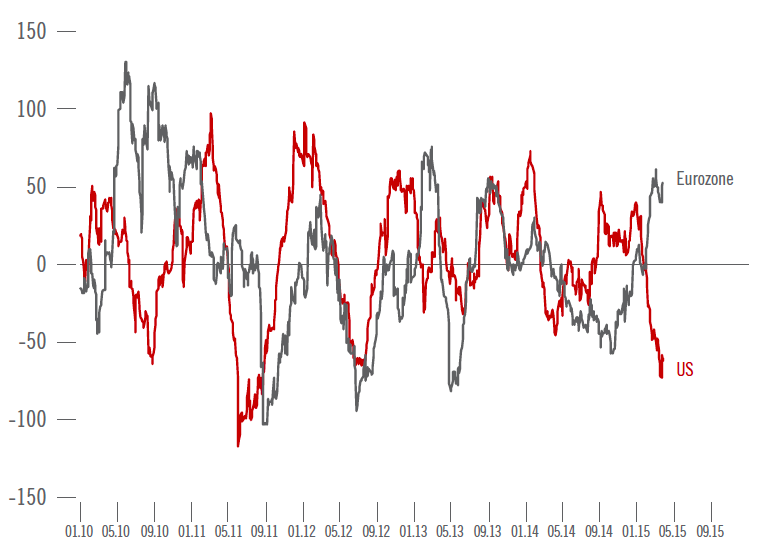 The above shows divergence in the two series from Q4 2014 on.

And the overall markets valuations heat map showing stronger over-valuation (lighter colouring) in Q1 2015 in the euro area core compared to the US: 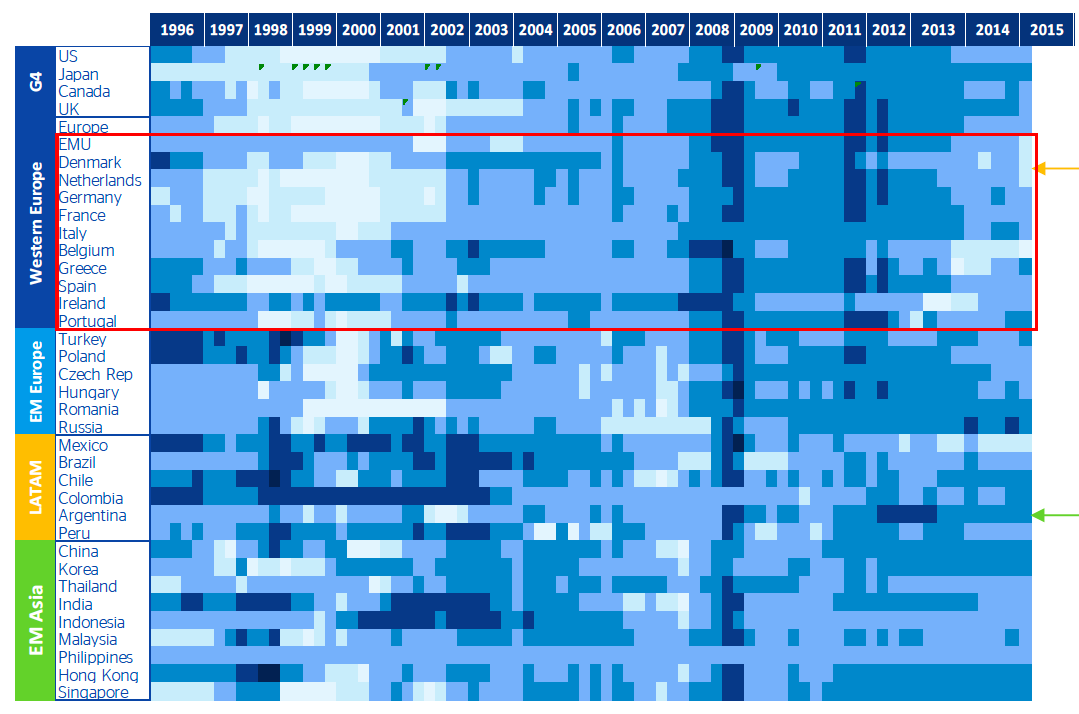 In cyclical terms, the above reinforces the view that the U.S. economy is settling into the growth range around 3.1% of GDP, while the euro area economy is moving closer to 1.1-1.4% growth. The divergence in two economies' core signals of future activity is in part driven by the differences in the monetary policies expectations, with ECB driving deeper into its QE programme, while the Fed is now shifting toward tighter stance.

In particular, recent statements from the Fed are fuelling uncertainty about the dollar and the U.S. interest rates environment. Median analysts outlook suggests a 50bps hike by the end of 2015 on the Fed side, with my own view that the Fed is most likely to hike around September. This outlook is highly uncertain, due to divergent signals coming from the Fed. Another point of uncertainty is what will follow the initial hike in U.S. rates. My view is that we can see a relatively long period of time over which the Fed will do nothing, before hiking the rates for the second time. The reason for this is that the Fed is fully aware of the risk of making a policy error on its first hike size and timing, and it will leave a wide enough period to collect evidence on the effects of its first intervention before moving again.

Meanwhile, the ECB has delivered twin push on its expansionary monetary policy in March, completing EUR60 billion in purchases of bonds and also deploying EUR97.8 billion TLTRO lending. The balancesheet of the ECB is growing, finally, and with it, Frankfurt has delivered a big stimulus to the euro area financial markets. This pushed bond yields to record lows: German yields are negative out to 6 year maturity, with 10 year Bunds trading at around 0.2% yields, and UST-Bund 10 year spread widening to 180 bps. It also shifted liquidity into risk assets, such as stocks and corporate bonds. Stock markets rallied: Germany up 25% in 2015 so far, France up 22%, Portugal up 31%, Spain up 14% and so on. Virtually none of these gains can be attributed to improved corporate balancesheets or companies' performance.

Here is a neat summary by Pictet of markets moves over Q1 2015: 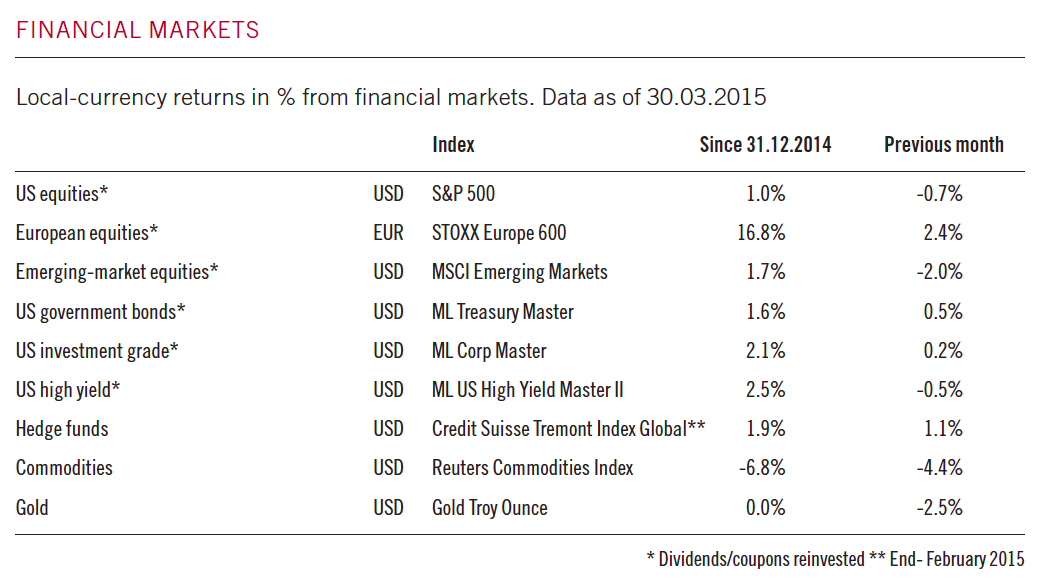 Source: Pictet
The above highlights two things:
As Pictet notes, virtually all of the above outperformance is down to monetary policy-induced revaluation of the exchange rates: "Shares, in local currency terms and with dividends reinvested, are up by 16.8% in Europe, well ahead of the S&P 500’s 1.0% gain. However, European investors who
had invested in US equities will have benefited from a 13.7% rise in the S&P 500 when translated into euros, considerably reducing Wall Street’s underperformance in the year to date. Japanese shares have been the top performers though, advancing by 10.5%. If we add in the euro’s fall in value against the yen, that translates into a rise of just over 24.5%."
Excluding energy sectors, corporate earnings growth forecasts currently put expected earnings uplift of 9.0% in the U.S. against 15.8% in the euro area over 2015, again predominantly on the back of currency valuations changes.
All in, the worrying trend of economic performance fully dependent on unorthodox monetary policies and relatively unanchored in the real economy remains. Rising divergence between the U.S. - euro area signals shows inherent weaknesses and risks present in such  environment.