Later today, IMF head had the following to say on the subject: "To ensure economic and financial stability, [programme] objectives need to be achieved in a manner consistent with maintaining a strong international reserves position over the medium term, in line with projections under the program. In this regard, the NBU’s international reserves cannot be used for sovereign debt service without the government incurring new debt, which would be inconsistent with the objectives of the debt operation. Ultimately, Ukraine’s debt repayment capacity is limited by its fiscal capacity."

De facto, Ms. Christine Lagarde means the following: forex reserves held by the National Bank of Ukraine will not be used to fund debt repayments or servicing. IMF loans cannot be used for debt redemptions or servicing. Which means Kiev can only pay out on bonds out of current revenues left or via new borrowing in the markets. Kiev has none of those funds available, so Ms. Christine Lagarde effectively gave Kiev an order to default, as "Ukraine lacks the resources under the program to fully service its debts on the original terms."

"...in the event that a negotiated settlement with private creditors is not reached and the country determines that it cannot service its debt, the Fund can lend to Ukraine consistent with its Lending-into-Arrears Policy."

Ms. Lagarde effectively said in Ukraine, IMF will act differently than it did in all European programme countries and differently from pretty much every other case in its history.

In addition, Ms. Christine Lagarde has gone as far as ordering the bondholders to accept Kiev deal or face a forced default. Ms. Lagarde qualified this order being in the interest of the bondholders, explicitly linking that interest to the IMF 'conviction'. This is a major point, because IMF is now indirectly dictating - via Kiev - to the private markets terms and conditions of their surrender.

Note: I tend to agree with Ms. Christine Lagarde on the necessity of a write down, but this is one of these rare (if not unique) occasions where the IMF is effectively ordering a default and expropriating private property of third parties.

Final note: private sector investors have based their proposal for haircuts on the premise that Ukraine will be able to use forex reserves at NBU as a source of repayments post-restructuring. Ms. Lagarde now cancelled that position in one go.

All of this means two things - beyond the immediate consideration of Ukrainian situation:
1) IMF is trying to hedge the risk of future (not current) slippage in the programme and insulate the funds it supplies from being exhausted on debt servicing and repayments. This means the IMF is seeing Ukraine as a huge risk engagement at this stage and is doing preemptive damage control. All the talk about debt sustainability under the IMF programme is a fig leaf of decorum: even if haircuts are delivered as planned, IMF sees big risk of programme being derailed and wants its money ring-fenced.
2) IMF is also trying to re-establish some sort of an independent agency reputation, post-European experience.

Ukraine's default is now a matter of days, unless private bondholders surrender. Prepare for a wild ride…

Per S&P release: "The downgrade reflects our expectation that a default on foreign currency central government debt is a virtual certainty." S&P also warned that any 'exchange offer' - an offer mandated under the IMF latest loan package to Ukraine (http://trueeconomics.blogspot.ie/2015/03/16315-ukraines-government-debt.html) - will constitute default. "Once the distressed exchange offer has been confirmed, we would likely lower the foreign currency ratings on Ukraine to SD and the affected issue rating(s) to D".

Per S&P: "The Ukraine ministry of finance’s debt operation is guided by the following objectives: (i) generate $15 billion in public-sector financing during the program period; (ii) bring the public and publicly guaranteed debt-to-GDP ratio under 71% of GDP by 2020; and (iii) keep the budget’s gross financing needs at an average of 10% of GDP (maximum of 12% of GDP annually) in 2019–2025… The treatment of the eurobond owed to Russia (maturing in December 2015) is likely to complicate matters. The Ukrainian government insists it will be part of the talks, while the Russian government insists that the bond, although issued under international law, should be classified as "official" rather than "commercial" debt given the favorable interest rate and the fact that it was purchased by a government entity. …if Ukraine has to pay the $3 billion in debt redemption this year, it will make it very difficult for Ukraine to find the $5 billion in expected debt relief in 2015 that underpins the IMF’s 2015 external financing assumptions."

Beyond the restructuring threat, there is economic performance that is not yielding much consolation: "The negative outlook reflects the deteriorating macroeconomic environment and growing pressure on the financial sector, as well as our view that default on Ukraine’s foreign currency debt is virtually inevitable,”

Meanwhile, ever cheerful IMF is projecting Ukrainian GDP to shrink by 'only' 5.5% in 2015, and grow at the rates similar to those forecast by S&P between 2016 and 2018. IMF sees inflation rising to 33.5% this year. Government debt projections by the IMF are only marginally more conservative than those by the S&P.

Meanwhile, lenders to Ukraine have already pushed out a tough position on talks with the Government: http://www.bloomberg.com/news/articles/2015-04-09/ukraine-creditors-fire-opening-salvos-before-restructuring-talks

As I noted before, this an extraordinary 10th IMF-assisted lending programme to Ukraine since 1991. None of the previous nine programmes achieved any significant reforms or delivered a sustainable economic growth path. In fact, the IMF presided, prior to the current programme over nine restrcturings of the Ukrainian economy that produced more oligarchs, more corruption at the top of the political food chain and less economic prosperity, time after time.

Meanwhile, over the same period of time, world's worst defaulter, Argentina, has managed to have just three IMF-supported lending programmes. Argentine bag of reforms has been mixed, but generally-speaking, the country is now in a better shape than it was in the 1990s and is most certainly better off than Ukraine, as the relative performance chart of two economies over time, based on IMF WEO (April 2015) data, indicates: 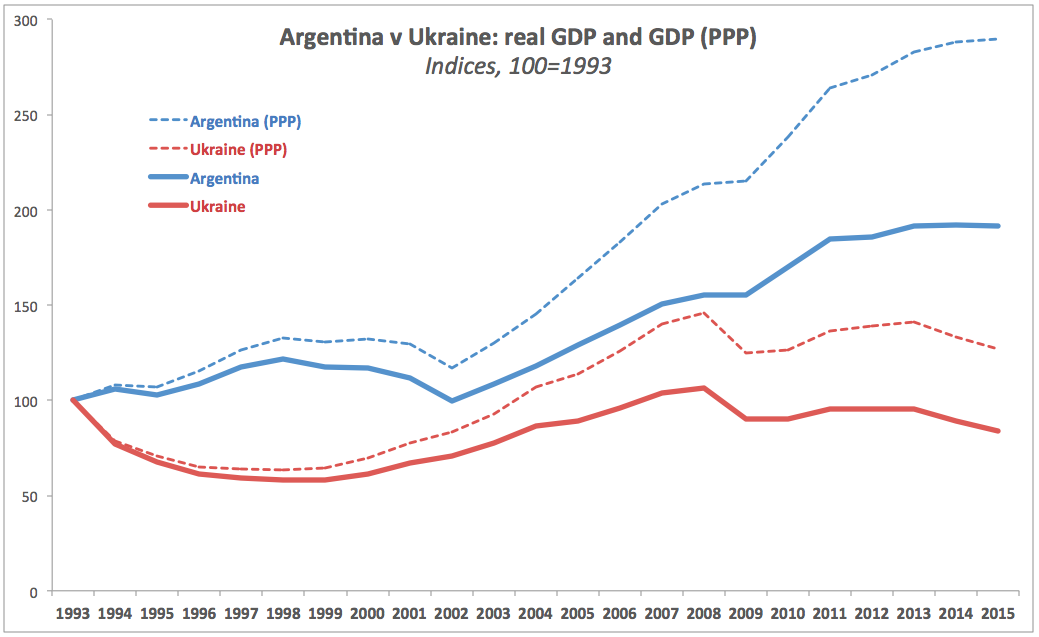 Somewhere, probably in the basement of the 700 19th St NW, Washington DC, there exists a data wonk that truly believes that Ukrainian debt is 'sustainable' and that this time, things with 'structural reforms' will be different from the previous nine times. I would not be surprised if the lad collects Area 51 newspapers clippings for a hobby. He's free to do so, of course. But the Ukrainian economy is not free when it comes to paying for the IMF's bouts of optimism. And with it, neither are the Ukrainian people.

What the Ukrainian economy really needs right now is a combination of pragmatic political reforms to bring about real stabilisation, root-and-branch clearing out of corrupt elites, including business elites and not withstanding the currently empowered elites, assistance to genuine (as opposed to corrupt rent-seeking) entrepreneurs, all supported by assisted and properly structured FDI, direct development aid and a real debt writedown. The IMF-led package does not deliver much on any of these objectives. If anything, by passing the cost of reforms onto ordinary residents, it does the opposite - drains investment, saving and demand capacity from the economy, imperilling its ability to create new growth and enterprises.