Ah, the heady days of campaigning and promising are about to befall Ireland once again… soon… In the mean time, let us recall our Dear Leader's Enda "Business Dynamo" Kenny promise of the recent past:

Let's leave the family and old dignity bits to the softer side of the Coalition and focus on the first promise, squarely relating to economics.

On October 8, 2011, Mr Kenny repeated the said promise: "Since coming into office 7 months ago I have told nearly all audiences that by 2016 I intend to make Ireland the best small country in the world in which to do business…"

And then again, on February 28, 2013 the "Dynamo" spun again: "Those of you from Ireland will have heard me say many times that my ambition is for Ireland to become the best small country in the world for business by 2016. It is an ambition I believe we will achieve. The scale of reform and action across Government to improve our competitiveness is unyielding until we reach our goals."

There are many things going on here, perhaps unbeknownst to Mr. Kenny. But one thing is pretty darn clear - Ireland is nowhere near being a half-decent place to become an entrepreneur. Why? Read this: "The reality is that there is no incentive tax-wise for Irish entrepreneurs" http://www.independent.ie/business/the-reality-is-that-there-is-no-incentive-taxwise-for-irish-entrepreneurs-31396747.html. Authored by an entrepreneur and an investor.

Those of you who follow my work have known for ages that I advocate complete reform of our tax codes in relation to:


Those of you who are entrepreneurs in Ireland known that none (in contrast to Mr Kenny's assertions) of these (and other) key areas of Ireland's competitiveness have been reformed or improved by the current Government. I repeat: none.

Instead of creating a culture of real enterprise and entrepreneurship, Mr. Kenny is confusing pro-business (incumbent MNCs) agenda for real enterprise agenda. Thus, he continues to pile mile high various investment schemes, grants, incentives that create political subsidies to favoured entrepreneurs and companies at the expense of normal entrepreneurs and companies, that distort rates of return on investment, and incentivise rent seeking. Meanwhile, real entrepreneurs are faced with huge tax demands, tax uncertainty and legal bills to plan for these.
Here is an unedited version of my article for Manning Financial on the upcoming pain in the global markets from the Central Banks activism.


With spring sunshine, the glowing warmth of the overheating bonds markets is bringing about the scent of optimism to the macro-analysts' desks. On March 19th, the NTMA issued EUR500 million worth of 6mo notes with a yield of -0.01%. With a few strokes of the 'buy' keys, the markets welcomed Ireland to the ever-expanding club of nations that enjoy the privilege of being paid to borrow from private investors.

In a way, this is the story of Ireland's recovery distilled to a singular event: with the Government borrowing costs at their historical lows, the memory of the recent crises is fading fast from the pages of our newspapers. Alas, the drivers of this recovery are illusory. All are temporary, none are structural or sustainable, in the long run. In fact, the current markets reprieve is concealing the real dangers for domestic investors – dangers of new asset bubbles and potential future losses.

Take a look at the euro area sovereigns at large.

After years of austerity, 2015 is shaping up to be a year of broadly-speaking neutral public spending. In other words, as the euro area Governments' debt remains sky high, public deficits are unlikely to shrink by any appreciable amount. Why bother with reforms, when you can be paid by the markets to borrow? Aptly, as the chart below shows, European economic policy uncertainty remains at crisis period averages, well above the safety range of pre-crisis years. 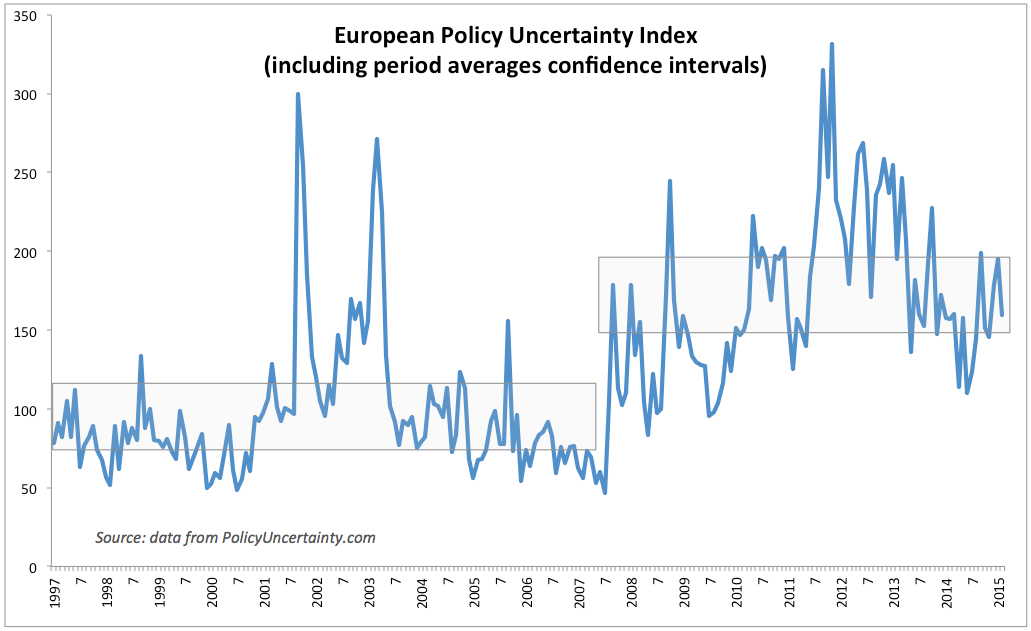 
Although the Government is usually quick to claim credit for the massive improvements in Irish yields, in reality, Dublin has little to do with these. At every point from Q3 2011 through today, large scale declines in the Government cost of borrowing came courtesy of the ECB. The latest gains are no exception: the ECB has just launched a sizeable bonds-buying programme and with it, the quantum of negative yield debt in the global markets has gone from roughly USD3.6 trillion in January to USD4.2 trillion by mid-March. As of now, 19 percent of the Global Bond Index-listed debt is trading in negative rates territory.

This, by far, represents the largest long term challenge for investors and the greatest risk to the global economies. Expansionary monetary policy pursued by the central banks around the world, including the ECB aims to push up economic growth and reduce the risks of deflation. It also attempts to repair the monetary policy transmission mechanism: that cheap ECB-supplied liquidity is being lent by the banks to companies and households in the forms of new credit.

However, from the investors’ perspective, this monetary activism can end up backfiring. For a number of reasons.

Firstly, as shown in Chart 2 below, monetary policy-driven credit expansion is propelling stock markets and debt markets valuations to all-time highs across the advanced economies with absolutely no tangible connection to real fundamentals, such as growth in economic activity, household incomes, employment, and even capital investment. By the very definition of the financial bubbles, current monetary policies activism is inflating returns expectations unanchored in reality.

Secondly, monetary expansion means that households and firms struggling with debt are given a short-run reprieve from facing the true costs of their borrowings. But the day of reckoning awaits in the future. This means that households and corporates are likely to continue engaging in precautionary savings even as the Central Banks drop rates and bonds markets bid the cost of issuing debt down. Meanwhile, households and companies with low debt exposures are likely to save more to offset declines in their returns on deposits. Taken together, these factors are likely to further suppress domestic demand, while setting us up for a major crisis once the cost of debt starts rising in the future.

Thirdly, negative yields are, like all bubble-generating factors, self-reinforcing in their nature. With central banks increasingly charging commercial banks for deposits, banks prefer buying bonds even in the presence of the negative yields. This means that negative policy rates are reinforcing the dysfunctional monetary mechanism, locking in more liquidity into government bonds and driving yields on government paper further down. The resulting increases in bonds prices incentivise commercial banks to gamble on future capital gains by buying even more bonds. This spiral of demand for government debt depresses banks future profitability as investors bid bonds prices up and loads more risk of significant future losses that will materialise once QE policies begin to unwind.

Another pesky side effect of this is the banking sector stability. Negative interest rates on Central Bank deposits lead to lower deposit rates for banks' customers. Banking sector loans-to-deposits ratios rise, making banks more dependent on the shadow banking system for funding and more levered. Interestingly, in the U.S. at least one large bank, J.P. Morgan has already announced that it will be charging customers for large deposits up to 5.5 percent annual fee.

Fourthly, negative rates and yields are increasing the probability of monetary policy misfires - a scenario where one or several Central Banks around the world can tighten policy too fast and/or too early, completely derailing economic recovery. This problem is global and contagious. Investment grade government bonds are effectively substitutes for each other in majority of investment portfolios. As the result, negative yields in the euro area today are keeping yields low in other advanced economies. This is already causing discomfort in the U.S. where dollar rise relative to other currencies is being driven by a combination of two factors: the expected mismatch between U.S. and euro area policy rates, and investors' fear of Fed policy errors over the next 3-6 months.

Fifthly, the demand for negative yield bonds appears to be setting the unsuspecting investors for a fall. In a recent research note, the investment bank Jefferies discovered that much of the demand for such paper comes from indexed funds. Investors in these extremely popular funds simply have no idea that the strategy the funds pursue is not designed for the world where top-rated bonds are paying negative yields. And as funds start posting losses, the same investors are likely to rush for safety into other asset classes – namely equity. Yet, with equities already at historical highs, the safety-minded investors will be left with buying even more assets at bubble valuations.

Sixthly, negative yields on Government bonds are a disaster waiting to happen for insurance, asset management and pension sector as they create huge risks at the heart of these companies long-term investment portfolios. As insurance companies and pensions funds chase the yield, premia will have to rise, risks embedded in pensions portfolios will jump and returns on longer term contracts will fall. As the result, some financial analysts are warning of not only economic, but also political consequences of the monetary policy activism.

The bankers' regulatory body, the Bank for International Settlements is not amused. In a recent statement, Claudio Borio, the head of the BIS monetary and economic department said it is simply impossible to tell how investors, consumers, voters and the governments are going to react to the negative yields and interest rates. "…technical, economic, legal and even political boundaries may well be tested. The consequences should be watched closely, as the repercussions are bound to be significant, on the financial system and beyond," Mr Borio said.

From Irish investors point of view, the risks arising from the euro area negative rates and yields environment are significant.

In a study published in 2005 (http://www.bis.org/publ/work186.pdf), BIS researchers found asset price busts, especially those associated with large property markets adjustments, to have much more painful economic impacts than deflation. The study covered all advanced economies over the period from 1873 through 2004 and included analysis of deflation effects on Government debt and growth. The same results were on firmed by another BIS study published earlier this year (http://www.bloomberg.com/news/articles/2015-03-18/the-central-bank-of-central-banks-says-keep-calm-about-deflation). 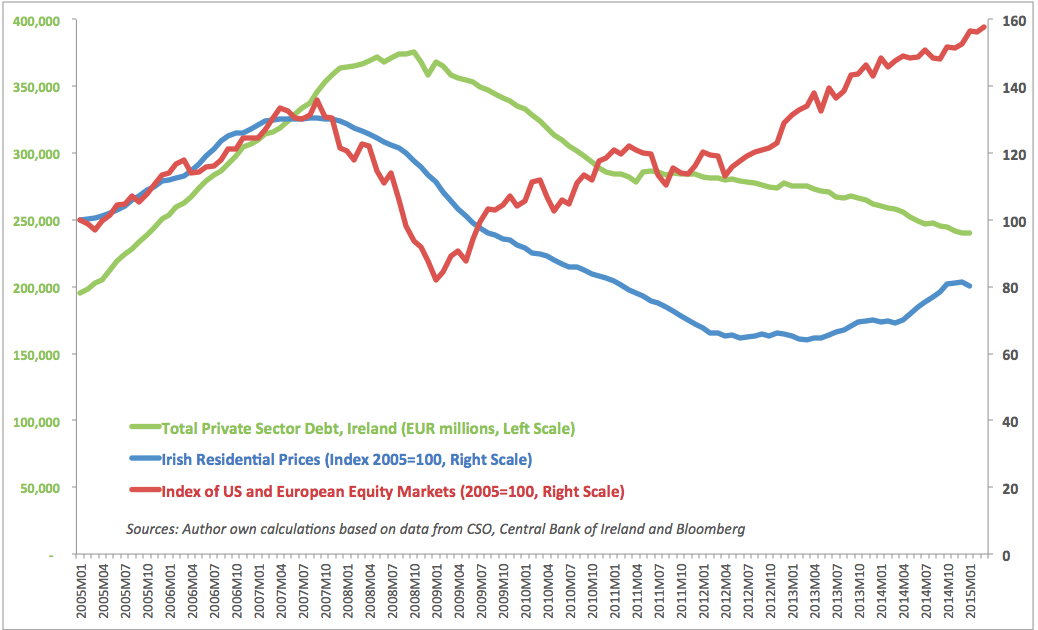 Source: Author own calculations based on data from CSO, Central Bank of Ireland and Bloomberg

As of today (see Chart 2), Ireland is still experiencing property prices that are 38 percent below the pre-crisis peak (in Dublin 39 percent), private debt that is, once controlled for sales of mortgages, and Nama and bank loans to non-banking investors, stuck around mid-2005 levels, and growth predominantly driven by the multinational corporations' tax optimisation strategies. In this environment, negative rates are masking the extent of the problems still present in the economy, while euro devaluation, coupled with exports growth concentration in the MNCs-led sectors, are creating a false impression of improved productivity and competitiveness.

For domestic investors, this means that both equity, corporate and government debt markets  in Ireland and across the euro area are simply out of touch with macroeconomic reality on the ground. The global Central Banks-led policies are pushing our traditional investment and pensions portfolios into the high risks, low returns corner, commonly associated with financial assets bubbles. While some speculative exposure to the US and Emerging Markets assets is always welcome, the bulk of investment allocation today should be focused on conservative view of key risks presented by the negative rates and yields environment. Tax planning, portfolio cost minimisation, low gearing and high liquidity of investment allocations should take priority over pursuit of short term yields and capital gains.