Couple of weeks back I posted a detailed list of ECB ELA hikes since February 2015. So here's an updated table:

Now, that implies 3 weeks cumulative ELA rises of EUR700mln and reserve cushion on ELA below EUR2.5bn by my estimate. And for all that, Greek Central Bank recoverable assets are currently at EUR41 billion. Ugh… Oh… the proverbial nose is tightening… but on who's neck?

The neck is somewhere in here - within the Greek Target 2 liabilities debate, liabilities that continue to rise, prompting a fine, but esoteric debate:


I side with Karl Whelan on this. What is material is Sinn's assertion that the Greek residents' "stock of money sent abroad and held in cash having already ballooned to 79% of GDP". And Greece is facing big bills on debt redemptions and wages and pensions in the next 3 months (see timeline here: http://trueeconomics.blogspot.ie/2015/04/24415-greek-debt-maturities-through-2016.html) or: 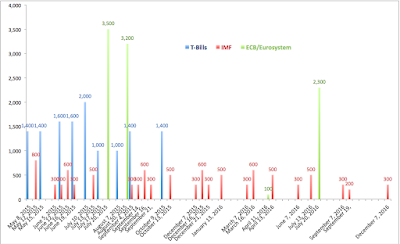 One thing is clear from all of this: Credit Swiss estimate of 75% chance of a deal being done this month on Greek 'programme', while the CDS markets are pricing in 75% probability of Greek default over the next 5 years:

And we have equally conflicting 'proposals' on how such  programme might be arranged: http://www.zerohedge.com/news/2015-06-02/greece-troika-submit-conflicting-eleventh-hour-deal-proposals which can be summarised as "the bottom line seems to be that, fed up Syriza's unwillingness to concede its election mandate, the troika will now write the agreement for Greece and Tsipras can either sign it or not. Apparently, the IMF has scaled back its demands for EU creditor writedowns (another loss for Athens) but remains skeptical of the entire undertaking."

If this is true, the entire 'new deal' being offered to Greece amounts to a new can being kicked down the same road.

Map of the road? [note: the below table excludes short-term debt] 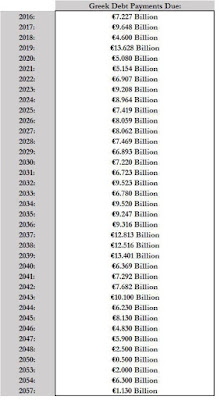 So to sum up today on the Greek front:

It's Back to the Future, in a Groundhog Day-like sorts of the Future...
Ifo Institute calculated euro system-wide losses from Greek default under two scenarios: Greece remains in the Euro and Greece exits the Euro.