I spoke with a local reporter about Fidel Castro's death yesterday. You can read some of my comments in Fidel’s death, Trump’s rise make Cuba hard to predict.

“Had (Hillary) Clinton been elected, there was a good chance Raul would have moved political and economic reform ahead at a faster pace,” Allison said. “From what we understand, Fidel did not want reform, did not want normalization.

“But we have a new president coming into office who seems to throw a new variable into the situation,” he continued. Though Trump, as in many cases, has not offered specifics, he “seems to want to take a much more difficult line and to have (Cuba) give more in terms of political and economic reform before the U.S. continues its end of the deal.”

One of the interesting exchanges that comes later in the article is when I was asked to respond to Senator Cruz's comments that lifting the embargo simply means that we are providing a lifeline to the regime. I said that's been our policy for two decades.

While the US has had an embargo against Cuba for many years, "wet foot / dry foot" migration policy, policies to allow Cuban Americans to travel to Cuba and send remittances to family members left behind, and billions of dollars worth of food exports from the US to Cuba, have all worked to prop up the Cuban government. There are good reasons why the US has adopted each of the policies. However, each undermined the stated goal of the embargo.
Cuba's Fidel Castro has died at the age of 90. The Guardian has a very good write-up about Castro's legacy in Castro’s legacy: how the revolutionary inspired and appalled the world.

Historians will debate Castro’s legacy for decades to come but his revolution’s accomplishments and failures are on open display in today’s Cuba, which – even with the reforms of recent years – still bears the stamp of half a century of “Fidelismo”.

The “maximum leader” was a workaholic micro-manager who turned the Caribbean island into an economic, political and social laboratory that has simultaneously intrigued, appalled and inspired the world.

“When Fidel took power in 1959 few would have predicted that he would be able to so completely transform Cuban society, upend US priorities in Latin America and create a following of global proportions,” said Dan Erikson, an analyst at the Inter-American Dialogue thinktank and author of The Cuba Wars.

The most apparent downside of his legacy is material scarcity. For ordinary Cubans things tend to be either in short supply, such as transport, housing and food, or prohibitively expensive, such as soap, books and clothes.

Castro's death seems anti-climatic. He's been out of power for some time while his brother Raul has been running the show. The island has undergone radical reforms (at least for them) during those years. US-Cuba relations have begun to normalize. As a non-Cuban, non-Cuban American, that's easy for me to say.
It seems to be fitting that his death comes shortly after the Colombian government and FARC signed another peace deal, perhaps ending the longest-running conflict of the Cold War in the Americas. While Castro inspired many of the revolutionary movements in Latin America, he became more selective after the failed effort in Bolivia that cost Che Guevara his life. Revolutionary movements had to prove themselves before Cuba would provide them with meaningful support.
Castro also supported negotiated settlements to the wars in El Salvador and Guatemala in the early 1980s, prior to many others. It would take several years for insurgents, governments, and the US / international community to successfully resolve those wars via negotiations.
Jonathan Blitzer has a really nice overview of the recent plights of thousands of Cubans who have been stuck in Costa Rica for the last few weeks. Cubans have been leaving the island for Ecuador. Ecuador has lax entry requirements for Cubans. Once in South America, they make the trip north to the United States border in search of the American dream.

However, Nicaragua threw up some roadblocks for the migrants which caused a backlog in Costa Rica. Costa Rica and its neighbors then had to find a workaround in order to help the migrants on their way. In the end, the Cubans were flown to San Salvador and then placed on buses to the Guatemala-Mexico border. They were then on their own to get to Texas and the States. Once at the border, they would apply for asylum, just as 44,000 of their countrymen did last year.

Central American governments have not been happy about facilitating the passage of Cubans fleeing economic difficulties on the island so that they can find jobs and family reunification in the US. At the same time, thousands of people from El Salvador, Guatemala, and Honduras are denied asylum and then returned to very dangerous situations in their home countries. Cubans should not receive privileged treatment over those who are actually fleeing for their lives.

US-Cuban relations are changing. As a result, most people believe that the "wet foot, dry foot" policy that gives Cubans privileges should they make it to the US will end. That is why Cubans are leaving the island now, before US policy changes take effect. We don't know when the policy will change, but they want to make sure that they get in now before it's too late. In that way, the exodus is similar to those Central Americans who left their country in 2014 hoping to take advantage of US immigration law that would allow them to stay. The belief was erroneous, but there was a pull factor as well.

Two other angles that Blitzer could have pursued were the friction caused by "wet foot, dry foot" with Haiti and the immigration backlog that occurred in Guantanamo and Panama. When Cubans were fleeing the island in the 1990s, most believed that the plight of Haitians was worse. Political, security and economic conditions on Haiti were as bad, if not worse, as those of Cuba. However, they were sent back to the island while Cubans were welcomed with open arms. There were protests, including some well know hunger strikes, in the United States. It was an embarrassing  and awful episode in the early post Cold War period.

The second angle was the large number of Cuban refugees who were held by US authorities at Guantanamo Bay Naval Base and in Panama. Over 30,000 were held at Guantanamo until the US worked out an agreement with Cuba and other countries about how to proceed. Some of those migrants were moved to US facilities, what looked like prison camps, in Panama as well.

While there are crises causing Central Americans and Cubans to leave their homes and make the perilous journey across the Florida Straits and Mexico, there is no large-scale migration crisis on the US' southern border. 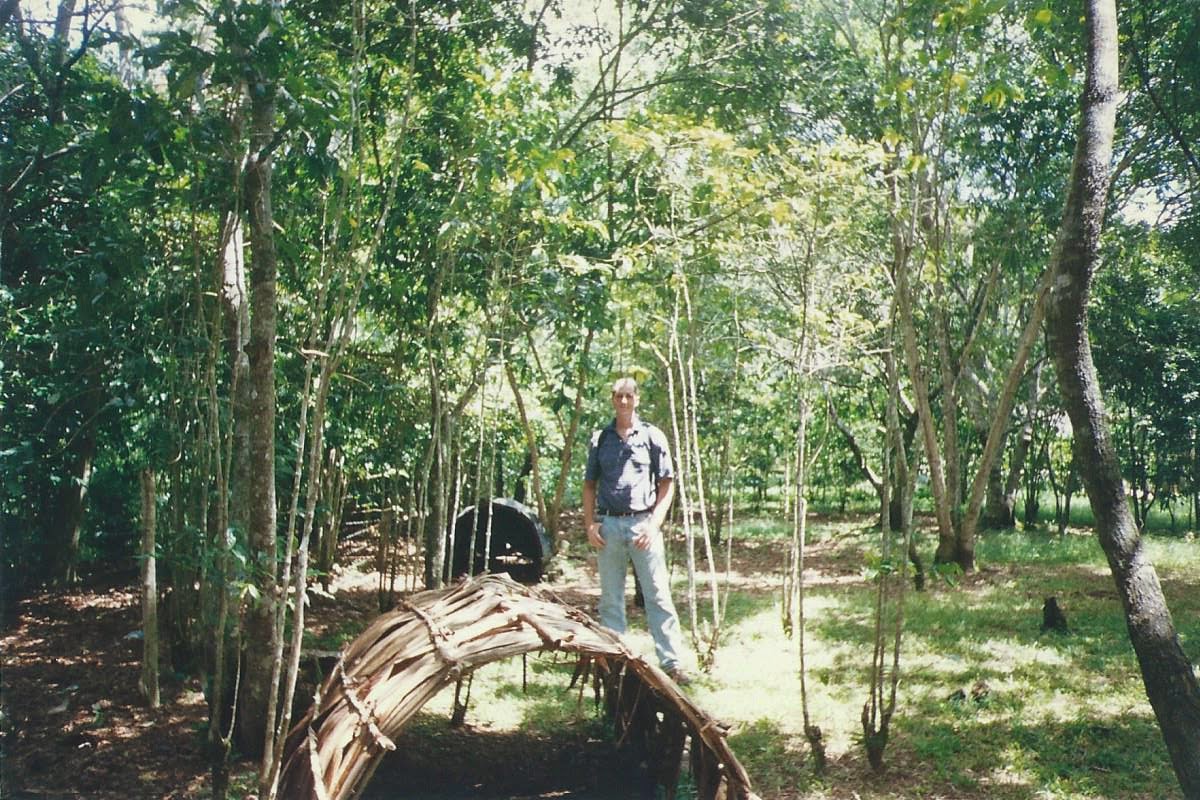 Ricardo Valencia carried out a brief interview with Salvadoran Ambassador to the United States Francisco Altschul for the USC Center on Diplomacy's CPD Blog. Ambassador Altschul was a member of the FMLN-FDR diplomatic commission during the civil war and spent a great deal of the war engaged in public diplomacy in the United States and Europe.

The FMLN-FDR's job was to promote and to sell the idea of the urgency of a political settlement in Washington, D.C. The basic idea was to make people understand that the best solution for everybody involved was the process of dialogue and negotiation, and that the FMLN was serious in its call for a political settlement, the idea of negotiations was not simple tactical move.

I'm pretty sure that Ambassador Altschul was referring to the late 1980s but there were also moments in the early years of the war where the FMLN and moderate civilian and military officials as well as the Cubans were exploring the possibility of a political solution.

In Back Channel to Cuba: The Hidden History of Negotiations between Washington and Havana, William LeoGrande and Peter Kornbluh document efforts by Cuba to reach out to the US to resolve the Salvadoran civil war through negotiations. El Faro has an excerpt (more of less).

In February 1981, Cuba reached out to the US and indicated its support for negotiations. As a demonstration of good will, the Cubans had reduced military support for the FMLN. Here we are only weeks removed from the FMLN's first final offensive and Reagan's January 20th inauguration. The Mexican government also tried to mediate in July, October and November 1981 and then February to April 1982. Lopez Portillo's government had become very close to Nicaragua and had become very engaged in Central America overall, which didn't sit well with the US. The Mexican and French governments would then sign A Common Position Between Mexico and France Regarding El Salvador, which would recognize the FMLN as a belligerent force in 1981.

From what Alberto Martin and I have found, the Cubans were encouraging the FMLN and the URNG to negotiate a political solution to the war so as to consolidate the revolutionary processes in Cuba and Nicaragua. Another victory by leftist forces in El Salvador, less likely Guatemala, might have increased the possibility of direct US military intervention on the isthmus - something that they wished to avoid. Here is what we wrote in Unity and Disunity in the FMLN (let me know if you'd like a copy):

The available information suggests that the PCS, the RN, and the Popular Social Christian Movement (MPSC) explored the possibility of negotiations with the governing junta, controlled by the PDC, before the March Constituent Assembly elections (U.S. Department of State 1982).3 According to Eduardo Sancho, a former RN leader and member of the FMLN General Command, the FMLN signed a pact in Havana in 1982 on the initiative of the RN and the ERP, whereby it agreed to renounce its pursuit of a dictatorship of the proletariat and to accept a democratic process (Sancho 2004). Not everyone agreed with the declaration, but after making clear his reservations, FPL general secretary Carpio signed the agreement.

It is important to mention that the Cuban and Sandinista governments supported the combined strategy of negotiation and armed struggle and even pressured Carpio into accepting this change (Sancho 2004; Kruijt 2008, 64).5 Havana was apparently willing to sacrifice the revolution in El Salvador (and Guatemala) in exchange for the consolidation of the Sandinista revolution. In August 1983, the Cuban government made the U.S. government aware of its willingness to stop supplying weapons to the FMLN and to persuade FMLN leaders to participate in the political process in exchange for the United States’s ceasing its support for the Contras (U.S. Department of State 1983). The U.S. escalation in El Salvador and the slim prospect for a quick FMLN triumph were responsible for the new Cuban perspective.

This battle over FMLN political and military strategy in El Salvador contributed to the murder of Ana Maria and the suicide of Carpio.

It's possible that Cuban overtures were sincere, but the US did not trust the Cubans. I'm not entirely convinced that the FMLN or URNG were willing to sacrifice their revolutionary dreams in order to secure those of Nicaragua and Guatemala. And it is nearly certain that most military and elites in El Salvador and Guatemala wanted nothing to do with regards to negotiations with the insurgents beyond surrender and we might talk.