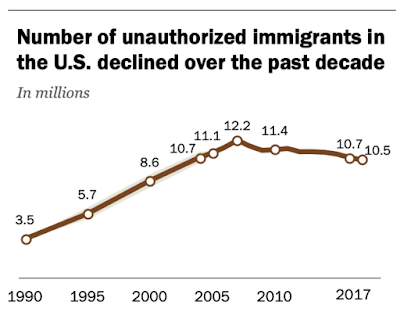 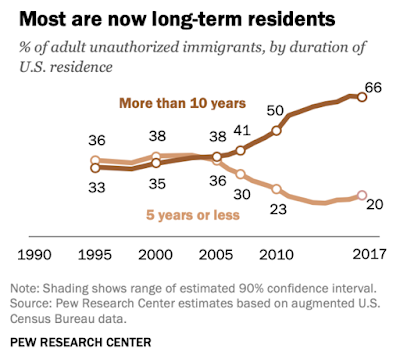 How to do immigration policy right? Ireland's CSO has published some new data on educational attainment in Ireland, covering 2017 results. The data is available here: http://www.cso.ie/en/releasesandpublications/er/eda/educationalattainmentthematicreport2017/. One table stands out on the issue of migration:

Click on the image to enlarge
Despite the report itself focusing on 3rd level attainment as a 'catch all' category, what really matters in terms of future quality of the workforce is more advanced education. And in this area, Irish migration system shines. Both, EU15 ex-Ireland & UK and non-EU migration pathways are working to enhance the stock of human capital in the country when it comes to honours tertiary degrees and post-tertiary education.

This is amazing, because the two pathways are distinct in terms of regulations covering mobility (access for immigrants). And both seem to be working well.

Of course, other factors contribute, beyond policy / regulatory facilitation, including Ireland's amazingly open society, welcoming people and social networks that support easy integration of those who want to integrate. But Ireland's policymakers and civil servants, who often act as the early contributors to this mobility also deserve credit. While problems and bottlenecks remain and need addressing, credit should be given where credit is due.

What happens when there is a systemic pattern of migration across borders and geographies that captures migration by political extremists?

This is neither a trivial question nor an esoteric one. It is non-trivial, because, to the best of my knowledge, we are yet to have a good understanding of what happens in the aftermath of military and political efforts to curb extremism. Curbing extremism pushes some of it into underground, but if attempts to curb extremism are not uniform across various geographies, it also incentivises selective migration of large numbers of extremists to those locations, where the efforts to curb their ideologies and behaviour are less strong. If so, when such a migration is feasible on large enough scale, asymmetric treatment of extremists across two geographies can lead to a concentration of extremists in that geography where they are treated more leniently.

This is the logic. What about the evidence?

Here is a fascinating study by Ochsner, Christian and Roesel, Felix, titled Migrating Extremists (March 10, 2016) published so far as a CESifo Working Paper (Series No. 5799: http://ssrn.com/abstract=2763513).

Quoting their abstract (emphasis is mine):

This is pretty much nuclear. Migration of individuals holding extremist beliefs, when systematically biased in favour of a specific location, does lead to concentration of extremist voters and such concentration is robust over time. Big lessons to be learned for today's migration regulation and institutional environment, as well as the systems of incentives and pressures that drive the migrant selection mechanisms.
In recent months, we have observed an ever-increasing cost estimates for Germany (and by a corollary Europe) of absorbing the 2015 inflows of refugees.

Central to these estimates have been numbers released by the Ifo Institute. These estimates started with the assumed inflows of 800,000 refugees in 2015 and were first pegged at EUR10 billion, “just to cover accommodation and food”. I covered these estimates earlier here: http://trueeconomics.blogspot.ie/2015/09/22915-germanys-ifo-refugees-to-cost-ten.html.

Subsequent estimates raised both the number of refugees (to 1,100,000) and the cost per refugee, raising the estimate to EUR21.1 billion (covered here: http://trueeconomics.blogspot.ie/2015/11/111115-new-cost-estimates-of-european.html) and per Ifo including “accommodation, food, creches, schools, German courses, training and administration” over 12 months.

In part, very high costs estimates are premised on the assumed ability of refugees to integrate into German labour markets (http://www.cesifo-group.de/ifoHome/presse/Pressemitteilungen/Pressemitteilungen-Archiv/2015/Q4/pm-20151204_Bildung_Fluechtlinge.html) due to lack of language skills, work skills and education. These assumptions - based on population averages and aggregate scores for key countries of origin for refugees - appear to be in line with German employers’ perception of refugees as generally lacking in key basic skills as noted here: http://www.cesifo-group.de/ifoHome/presse/Pressemitteilungen/Pressemitteilungen-Archiv/2015/Q4/press_20151126_sd22_fluechtlinge.html.

Taking Ifo Institute’s estimate of EUR19,000 in annual costs per refugee, and based on the EU Commission estimate that some 4 million Syrian refugees currently are in Turkey, Lebanon and Jordan, with some also in Egypt, Iraq and Libya, what are the chances that EU’s latest ‘aid’ to Turkey of a miserly EUR3 billion is going to be enough to address the problem?

If research also attempts to quantify cost/benefit assessment of the refugees inflows. In a more recent note (http://www.cesifo-group.de/cesifo/newsletter/1115/From_the_Editor_November_2015.html) the Institute states that “…Europe, with its ageing societies, needs new workers. Germany alone theoretically needs more than 30 million young immigrants until 2035 to keep the old-age dependency ratio constant at the current pensionable age, and maintain both the pension and contribution rates in its pay-as-you-go system unchanged. So, could the newcomers be the solution?”

The answer depends on which model one uses to estimate costs/benefits of inflows. “There have been different calculations about the benefit that refugees bring to the recipient countries. While a Keynesian model using a multiplier analysis until 2035 (!) comes to the conclusion that there are positive net benefits for the incumbent population, generational accounting models come up with frighteningly large loss estimates for the state, reaching between 79,000 and 450,000 euros per person in present value terms. This burden might well prove unsustainable if the number of immigrants continues unabated.” In other words, if you believe in a world where Government spending on anything (be it digging of ditches or building refugees shelter or hospitals) is a positive contributor to growth in the long run, things are just fine. If you believe that there can be misallocation of resources in investment and there can be inefficient transfers across generations as a result of multi annual policy commitments, things are pretty costly.

As usual, there is no agreement amongst the economists on the subject of economic impact of refugees. Which is not to warrant any statement about ethical and human dimension of how Europe should be addressing the crisis (economics, of course, is by far not the only consideration on this matter). But it is a good starting point (albeit a bit late for the current crisis) to have a debate as to the merits of different models for selecting refugees based on specific characteristics, such as prior work experiences, basic skills and education. It is also a good point to start thinking about how the balance between humanitarian assistance and development supports (in countries of origin) as well as social supports and workplace integration incentives in the host countries should/could be structured.

Ifo Institute position on the subject of host countries labour market and social supports structures is to stress the need for reducing minimum wage (Hartz IV) barriers to labour market entry. Without endorsing this view, here is an interesting link to a study that covered impacts of social welfare nets on entrepreneurship amongst migrants in the US, Canada and the UK (with Canadian experience being very interesting as Canadian model of highly selective migration filters is being advocated for Europe): http://trueeconomics.blogspot.ie/2010/02/economics-07022010-human-capital.html.

The refugees crisis of 2015 (and possibly 2016 and on) is testing European systems (labour markets, social welfare, capital structures etc) along the economic dimension. The debates and policy responses so badly needed today should have taken place years ago. Absent these, we are now staring at the possibility that this crisis will alter our political systems, while stressing our economic and social systems. A right response would, in my opinion, involve recognising first and foremost the humanitarian dimension of the crisis, while accelerating the process for developing long term economic responses.


Note: this post is a follow up on my appearance on Bloomberg Radio last morning discussing the topic of economic impact of the refugees crisis.

My column for the Cayman Financial Review this quarter covers the issues of economic development and migration: http://caymanianfinancialreview.cay.newsmemory.com/ go to page B20-21.