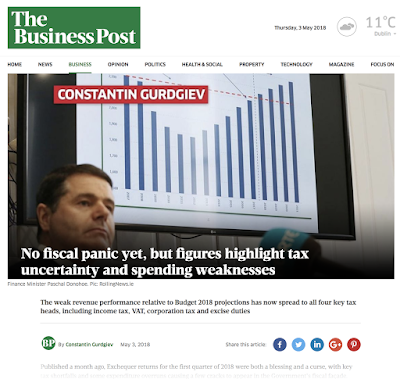 In the previous post covering CSO's latest figures on Irish Fiscal metrics, I argued that the years of austerity amount to little more than a wholesale leveraging of the economy through higher taxes. Now, a quick note of thanks: thanks to Professor Mario Draghi for his efforts to reduce Government deficits, thus lifting much of the burden of real reforms off Irish political elites shoulders.

That number equals to 75% of all cumulative savings achieved on the expenditure side (excluding capital transfers) over the entire period 2011-2016. That's right: 3/4 of Irish 'austerity' on the spending side was accounted for by... reduction in debt interest costs.

Say, thanks, Professor Mario. Hope you come visit us soon, again, with all your wonderful gifts... 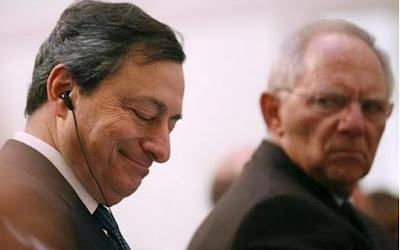 Ever since the beginning of the Crisis in 2008, Irish policymakers insisted staking the claims to the heroic burden sharing of the post-Crisis fiscal adjustments across the entire society, the claims closely mirrored by the supporting white papers, official state-linked think tanks and organizations, and even the IMF.

Time and again, independent analysts, myself included, probed the State numbers and found them to be of questionable nature. And time and again, Irish political and policy elites continued to insist on the credit due to them for steering the wreck of the Irish economy out of the storm's path. Until, finally, by the end of 2016, Ireland officially was brought to enjoy falling official debt burdens and drastically declining deficits. The Hoy Grail of fiscal sustainability, delivered by FF/GP and subsequently (and especially) the FG/LP coalitions was in sight.

Well, here's a new instalment of holes that the official narrative conceals. CSO's latest data for full fiscal year 2016 on headline fiscal performance metrics was published earlier this month. It makes for an enlightening reading. 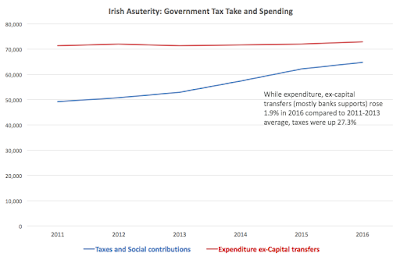 Here, two figures are plotted against each other:

The two numbers allow us to compare the oranges and oranges: policy-driven (as opposed to one-off) revenues and policy-driven (as opposed to banking sector's supports) expenditures. Fiscal discipline is the distance between the two.
And what do we see in this chart?
So what do we have, folks? More than 100% of the entire fiscal health adjustment in 2011-2016 has been delivered by the rise in tax take by the State - the coercive power whereby money is taken off the people without providing much a benefit in return. That, in the nutshell, is Irish austerity: charging households, many struggling with debt, loss of income, poorer health and so on, to pay for... what exactly did we pay for?.. I'll let you decide that.
My article on the Irish Finance Bill for Budget 2017 is now available on Sunday Business Post website: https://www.businesspost.ie/opinion/constantin-gurdgiev-2-key-budget-promises-watered-finance-bill-367627. 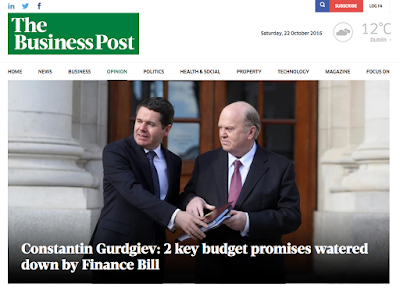 My comment for the Sunday Business Post on the Summer Statement by the Irish Government, covering fiscal space for 2016-2021 is available here: http://www.businesspost.ie/comment-sorry-real-ireland-youre-low-on-list-of-government-priorities/. 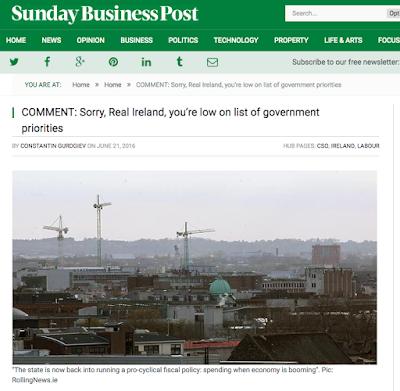