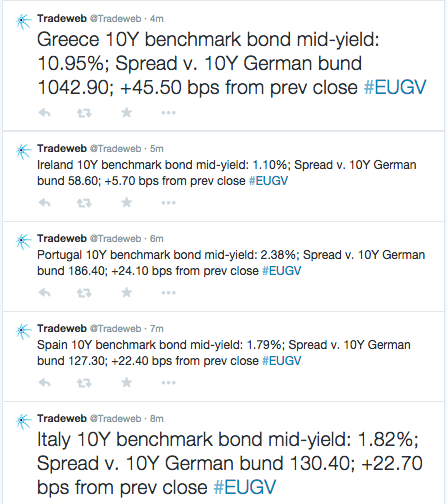 Per Bloomberg, this is down to Greek Prime Minister Alexis Tsipras stepping up "efforts to clinch a deal that would unlock financial aid… The ASE Index of stocks jumped the most since September 2012 from a two-year low on April 21. It ended up 6.1 percent in April, the biggest rally in western Europe. Bonds returned 13 percent, while securities in the rest of the region fell. Investors put money into Greek assets in April, betting the rally may have more to go if a default is averted. The nation and its creditors hope to reach a preliminary agreement by Sunday, ahead of a scheduled meeting of euro-area finance ministers on May 11, according to three people familiar with the matter." More on this here: http://www.eubusiness.com/news-eu/greece-debt-imf.10za.

One factor unmentioned is sidelining of Greek Finance Minister in leading the negotiations with the Troika. Another factor is growing discontent within the Greek ruling coalition - a move that increases pressure on Tsipras to get a new deal. My sources in Greece claim there are big disagreements within the Government and main parties. Much of this is focused on hard left's view that Syriza is abandoning its Programme promises. But, as common, much of it also about individual personalities.


Greece is a recurring nightmare - for Europe and for Greece itself.

The country had to be bailed out twice already, borrowing EUR240 billion from the European partners and the IMF. Its Government debt stands at 177% of GDP. The economy is down 25% since 2010 and unemployment rate is at 26%.

It is crunch time for the country:


Greece is being squeezed on liquidity front much more seriously than the immediate pressure points suggest.

Banks are losing deposits - probably over EUR5bn in April, on top of some EUR27 billion in 1Q 2015 which marked a 16% decline. These are being replaced by weekly increases in ELA by the ECB. In April alone, ECB hiked ELA by EUR5.6 billion.

Government is also running out of money. In first two weeks of May, Greece will need to refinance EUR2.8 billion of Treasury T-bills, repay EUR800 million on IMF loans. In June - EUR1.5 billion of IMF debt, EUR3.2 billion in T-bills. So there are big bills coming due.

Meanwhile, the Government is having difficulty paying pensions and public sector wages. The Government have already drained the local authorities funds, requiring their transfers to the Central Bank. Which provided somewhere between EUR1.6 and EUR1.9 billion in deposits. Not enough to cover May liabilities.

Beyond that: big redemptions are due in 2016: total of just over EUR5 billion, 2017 - over EUR6 billion, and 2019 - just under EUR11 billion. These are completely unfunded at this stage, as Greece needs to negotiate a new support package with the EU, IMF, and ECB - the so-called Institutions.


All in, the third option is currently the most likely one. Welcome to Europe's Groundhog Day, Season 8.