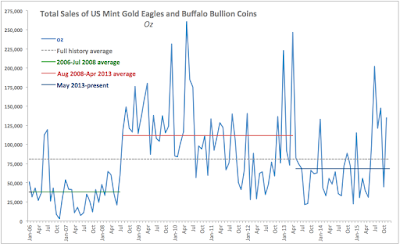 As noted in my note covering October sals, October decline was a correction reflective of volatile demand and also significant uplift in sales in previous months. As chart above shows, sales by weight are now well above period average and above peak period average. In 11 months of 2014, US Mint sold 679,500 oz of gold coins; over the same period of 2015 sales totalled 1,020,000 oz. November 2015 also marked 20th consecutive month of gold sales/price correlations (12mo running) being negative, suggesting strong and entrenched demand from buyers pursuing long hold strategy and taking advantage of improving cost of holding gold.
April sales of U.S. Mint gold coins came in at 39,500 oz, down 29.5% y/y. Over the first 4 months of 2015, total sales of U.S. Mint gold coins (by volume) is down 8.9% y/y. In terms of number of coins sold, April sales stood at 71,500 units, down 39.7% y/y and the first four months of 2015 cumulative sales are down 9.1% y/y. Meanwhile, average volume of coin sold in April stood at 0.552 oz per coin against 0.473 oz/coin a year ago. Still, average weight of coin sold in the first 4 months of 2015 is down 1.4% y/y. 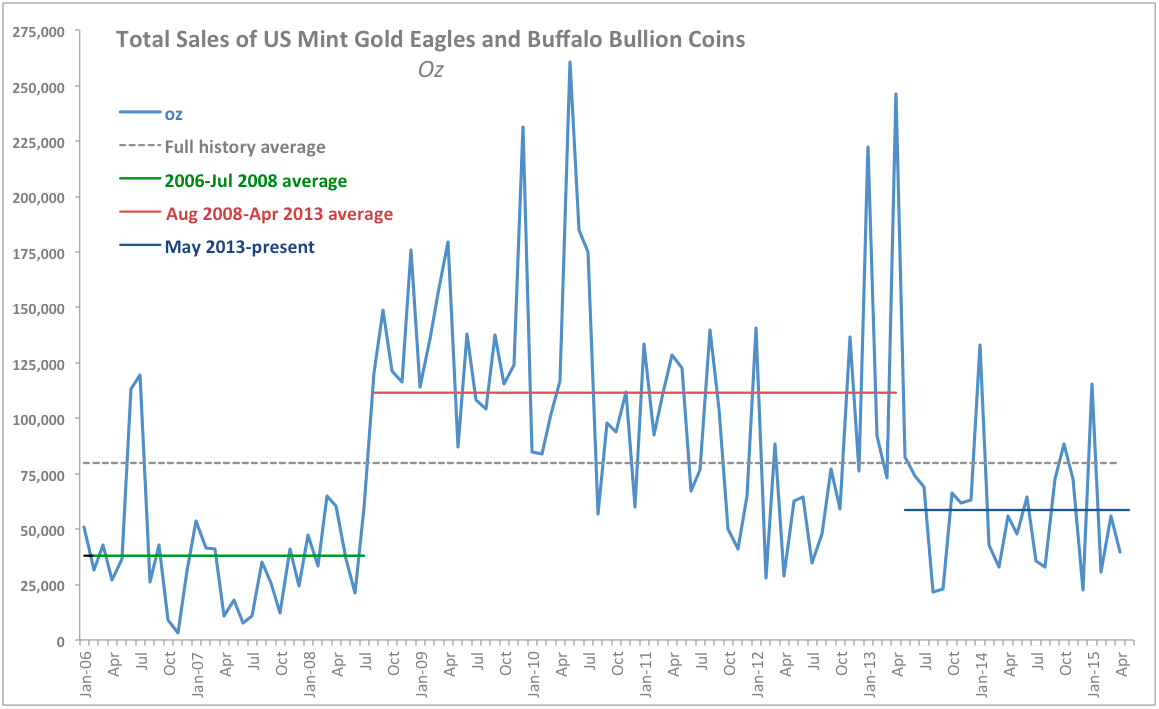 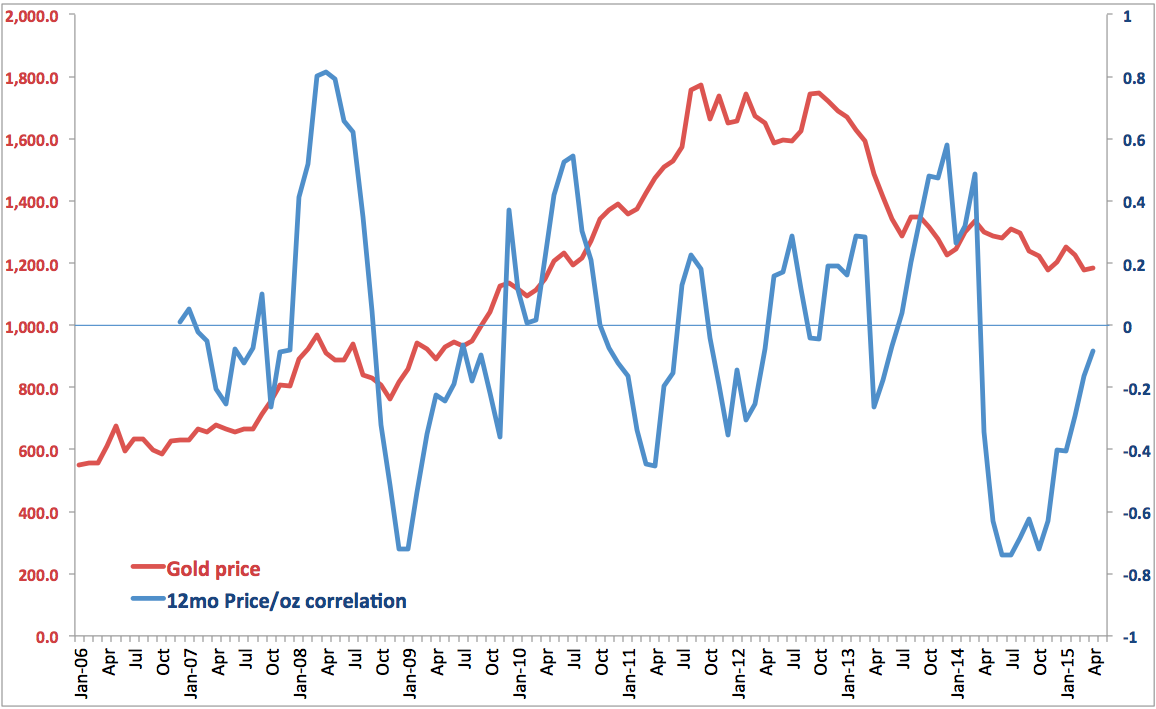 12 months dynamic correlation between prices and volume of U.S. Mint gold coins sales has remained negative in April, albeit at -0.08 not statistically significant. This means that over the last 12 months - from April 2014 through April 2015, investors and savers tended to purchase more U.S. Mint coins gold against falling prices, and less against rising prices. Historically, average 12mo correlation between gold prices and coins demand is -0.03.

Overall, the trend toward lower post-crisis sales for the U.S. Mint gold coins compared to the crisis period sales has been in place now since start of H2 2013 and remains in place. However, the trend is still to the upside compared to the pre-crisis period. Data from Q3 2014 on suggests some renewed weakening in demand trend, but confirming this will require more months coming in at below the post-crisis average reading.

The reason for being cautious about calling the short-term trend change in Q4 2014 is that data for Gold Eagles sales (we have many more years worth of these sales) suggests a different signal to total U.S. Mint gold coins sales. Specifically, as can be seen in the chart below, there is actually some potential positive growth trend emerging in the Eagles sales data for Q2 2014-present. 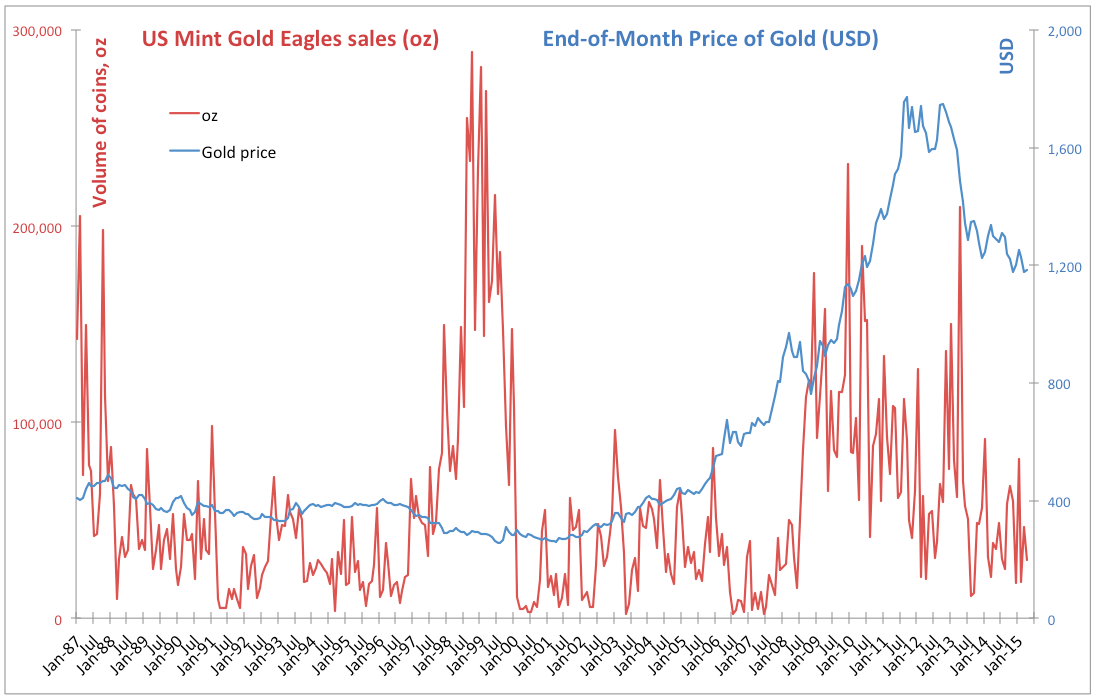