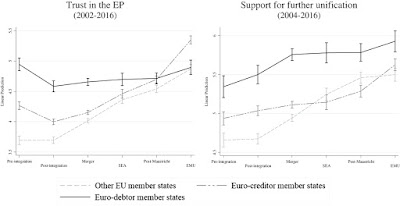 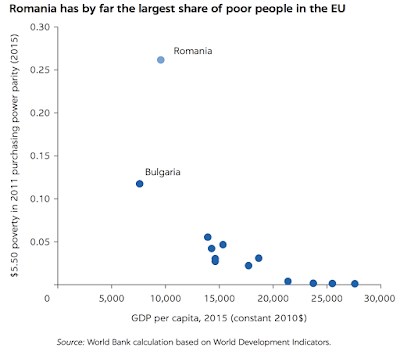 The positive effects of Accession were frontloaded, when it comes to structural reforms:
My comment for Euromoney on the topic of Brexit impact on UK sovereign credit risks: http://www.euromoney.com/Article/3563119/Country-risk-Experts-say-UK-economy-will-quickly-recover-from-Brexit-shock.html. 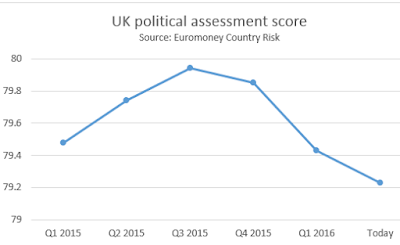 Swedish research institute, Timbro, published their report covering the rise of political populism in Europe. And it makes for a sobering reading.

Quoting from the report:

“Never before have populist parties had as strong support throughout Europe as they do today. On average a fifth of all European voters now vote for a left-wing or right-wing populist party. The voter demand for populism has increased steadily since the millennium shift all across Europe.”

Personally, I don’t think this is reflective of the voter demand for populism, but rather lack of supply of pragmatic voter-representing leadership anywhere near the statist political Centre. After decades of devolution of ethics and decision-making to narrow groups or sub-strata of technocrats - a process embodied by the EU systems, but also present at the national levels - European voters no longer see a tangible connection between themselves (the governed) and those who lead them (the governors). The Global Financial Crisis and subsequent Great Recession, accompanied by the Sovereign Debt Crisis and culminating (to-date) in the Refugees Crisis, all have exposed the cartel-like nature of the corporatist systems in Europe (and increasingly also outside Europe, including the U.S.). Modern media spread the information like forest fire spreads ambers, resulting in amplified rend toward discontent.

Net: “…one third of the governments of Europe are constituted by or dependent on populist parties.”

And the direction of this trend toward greater populism in European politics is quite astonishing. Per Timbro, “discussions on populism too often focus only on rightwing populism. Practically everything written on populism, at least outside Southern Europe, is almost entirely concerned with right-wing populism. Within the political sciences the study of right-wing populist parties has even become its own field of study, while studies on leftwing populism are rare.”

This skew in reporting and analysis, however, is false: while “…it is the right-wing populism that has grown most notably, particularly in Scandinavia and Northern Europe. However, in Southern Europe the situation is the opposite. If the goal is to safeguard the core values and institutions of liberal democracy we need a parallel focus on those who challenge it, regardless of whether they come from the right or the left. It is seriously worrying that seven per cent of the population in Greece vote for
a Nazi party, but it is also worrying that five per cent vote for a Stalinist one. The second aim of this report is therefore to present an overview of the threat of populism, both right-wing and left-wing, against liberal democracy.”

Here are some trends: 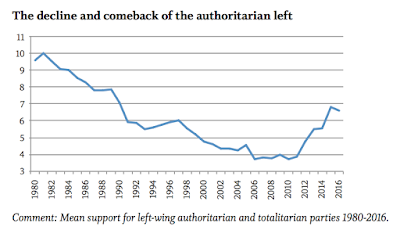 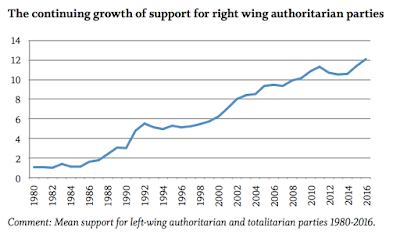 So total support for authoritarian parties is up, a trend present since 2000 and reflective of the timing that is more consistent with the introduction of the euro and subsequent EU enlargements. An entirely new stage of increase in authoritarianism tendencies was recorded in 2015 compared to 2014. 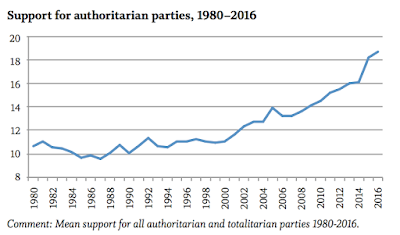 Save for the correction downward in 2007-2009 period, authoritarian parties have been on an increasing power trend since roughly 1990, with renewed upward momentum from 1999. 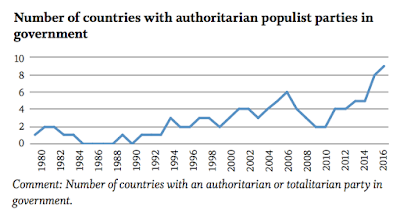 You can read the full study and reference the study definitions and methodologies here: http://timbro.se/sites/timbro.se/files/files/reports/4_rapport_populismindex_eng_0.pdf.


What we are witnessing in the above trends is continuation of a long-running theme: the backlash by the voters, increasingly of younger demographics, against the status quo regime of narrow elites. Yes, this reality does coincide with economic inequality debates and with economic disruptions that made life of tens of millions of Europeans less palatable than before. But no, this is not a reaction to the economic crisis. Rather, it is a reaction to the social, ideological and ethical vacuum that is fully consistent with the technocratic system of governance, where values are being displaced by legal and regulatory rules, and where engineered socio-economic system become more stressed and more fragile as risks mount due to the technocratic obsession with… well… technocracy as a solution for every ill.

While the EU has been navel gazing about the need for addressing the democratic deficit, the disease of corporatism has spread so extensively that simply re-jigging existent institutions (giving more power to the EU Parliament and/or increasing member states’ voice in decision making and/or imposing robust checks and balances on the Commission, the Eurogroup and the Council) at this stage will amount to nothing more than applying plasters to the through-the-abdomen gunshot wound. Brexit or not, the EU is rapidly heading for the point of no return, where any reforms, no matter how structurally sound they might be, will not be enough to reverse the electoral momentum.

For those of us, who do think united Europe can be, at least in theory, a good thing, time is to wake up. Now. And not to oppose Brexit and similar movements, but to design a mechanism to prevent them by re-enfranchising real people into political decision making institutions.

Does it make you wonder what the U.S. might have looked like if Sarah Palin was elected in 2008? Well, here's a snapshot of a similar experiment currently ongoing in Europe: behold the European Titan of Thought, the (one of the numerous) President of Europe, Jean-Claude Juncker and his latest escapade http://www.telegraph.co.uk/finance/economics/11583755/Anglo-Saxon-world-would-rip-apart-Europe-after-a-Grexit-says-Juncker.html.

This is the best that Europe can do in making high level appointments. And it is out there, on par with Palin.

So here are some choice moments from Mr Juncker-Palin lengthy career as Europparatchik...

All of which provides a decent comic relief across the Atlantic, and a dose of tears here, in Europe, where taxpayers are paying for this 'leadership' through the nose.