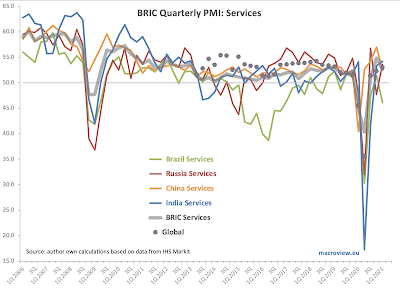 The same is confirmed by the Composite PMIs:

Brazil's 1Q 2017 Composite PMI came in at 46.7, up on 46.1 in 4Q 2016, but still below the stagnation line. In simple terms, Brazil's Composite PMIs have now signalled negative growth for 12 consecutive quarters. Improved 1Q 2017 reading is consistent with continued and strong contraction in the economy, albeit a contraction that is less pronounced than in previous quarters.

Russia's Composite PMI posted a reading of 56.7, marking the strongest growth performance for the economy since 4Q 2006. Predictably, given both Manufacturing and Services PMIs as discussed in above-linked posts, Russian economy has outperformed in 1Q 2017 global economic growth momentum and is currently the strongest BRIC economy for the fourth consecutive quarter.

India's Composite PMI came in at 50.8, up marginally on 50.7 in 4Q 2016. This marks the second consecutive quarter of Composite PMI readings for India that are statistically indistinguishable from the stagnation line of 50.0. There is little good news in the data from India, where the fallout from the disastrous de-monetisation campaign by the government has been taking its toll.

Chinese Composite PMI stood at 52.3 in 1Q 2017, down from 53.1, but still the second highest since 1Q 2013. In simple terms, this means that the Chinese economic growth is not accelerating off 4Q 2016 dynamics, suggesting that the economy has now exhausted any momentum gained on foot of a massive credit bubble expansion in modern history.

Chart below illustrates the dynamics: 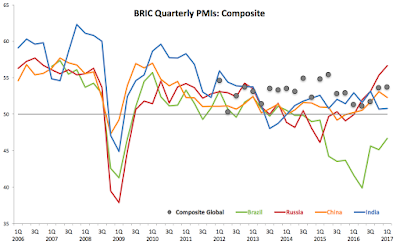 As shown above, Russia is the only BRIC economy currently generating upward supports for global growth.

When we consider individual sectoral indices, as shown in the chart below, BRIC Manufacturing sector is now pushing global growth momentum down, while BRIC Services sector is co-moving with the global growth, but provides no positive momentum to global economic expansion: 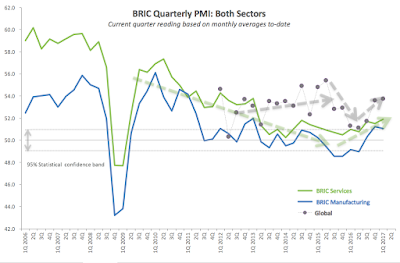 Finally, using monthly data (100=zero growth) for the BRIC economies index of economic activity (computed by me based on Markit and IMF data), the chart below shows just to what extent does Russian growth momentum dominates rest of the BRIC economies dynamics: 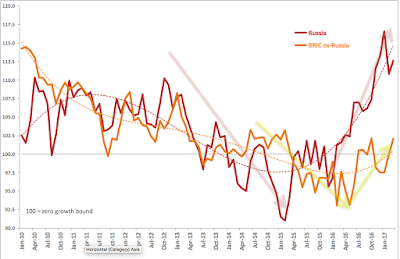 The news, therefore, were not great for the global manufacturing economy (stalled growth momentum in 1Q 2017), and for the BRIC economies.

Looking at Services PMIs next:

Brazil's Services PMI for 1Q 2017 averaged at 46.4, which is somewhat better than 44.5 average for 3Q 2016 and 4Q 2016 and stronger than 40.0 average for 1Q 2016. In simple terms, Brazil's Services activity continued to shrink and shrink rapidly in 1Q 2017, although the rate of contraction moderated. All in, Brazil's Services PMIs have now been in sub-50 territory for 10 consecutive quarters, two quarters shorter than Brazil's Manufacturing sector. The long-running and deep recession in Latin America's largest economy is continuing, although there are some very fragile signs that it might come to an end in the foreseeable future, as both Manufacturing PMI (at 49.6 in March) and Services PMI (at 47.7 in March) are showing signs of recovery.

Russia Services PMI for 1Q 2017 came in at a blistering pace of 56.8, up on already significant growth in 4Q 2016 at 54.6 and significantly above 1Q 2016 reading of 50.0. All in, this is the fourth consecutive quarter of Services PMIs above 50.0, with all four quarters reading statistically significant for positive growth. Russia is leading BRIC contribution to global growth in both Manufacturing and Services sectors, judging by PMIs.

Indian Services PMI was at 50.2 in 1Q 2017, which not statistically distinct from zero growth marker of 50.0, but up on 49.3 in 4Q 2016. In 1Q 2016 the Services PMI averaged 53.6 which was positive for growth. Indian economy has been hitting some trouble waters for the last two quarters, something I remarked upon in the post covering Manufacturing PMIs linked above. While Services are showing signs of stabilisation, the recovery is not yet evident in the data and is lagging Manufacturing sector performance.

China's Services PMI reading in 1Q 2017 disappointed those who hoped that 2016 credit explosion would set stage for a robust economic growth recovery. With Manufacturing PMI growth signal stuck at the same level in 1Q 2017 as in 4Q 2016, Services PMI reading for 1Q 2017 was actually below the 4Q 2016 reading (52.6 vs 53.0). Given that the index never once slipped below 50 in the history of the series, as well as given the moments of the underlying distribution, 52.6 reading is statistically indistinguishable from zero growth conditions. Thus, although posting the second strongest, amongst the BRIC economies, PMI reading for 1Q 2017 after Russia, Chinese Services sector was a relative negative for global growth momentum.

Chart and table below summarise some of the dynamics discussed earlier: 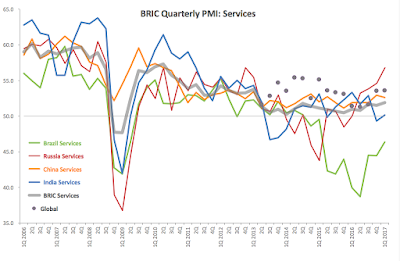 In summary, as shown above, global PMIs are supported to the upside only by Russian Services PMI dynamics, with Chinese Services PMIs providing virtually no momentum to global Growth, and both India and Brazil contributing negatively. Overall, thus, BRIC economies remain weak and under-perform global growth. 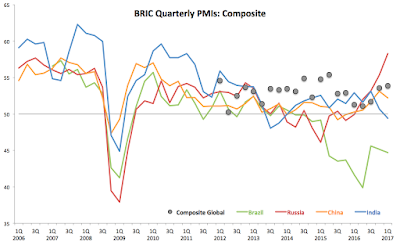 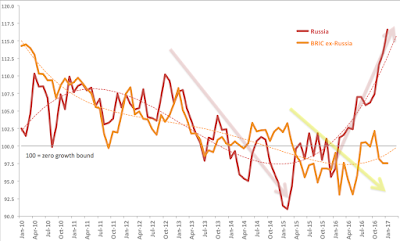 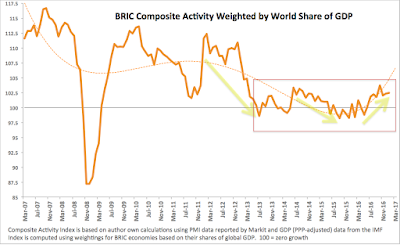 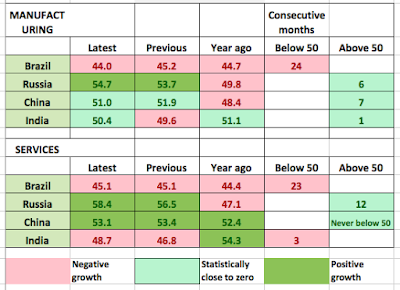 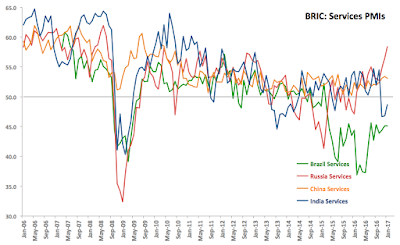 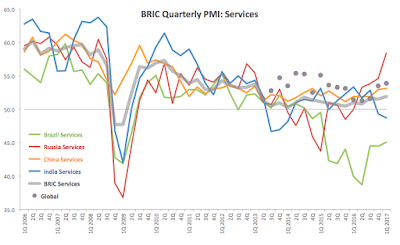