Anna-Cat Brigida takes a look at violence against women for Broadly with El Salvador's Invisible Victims of Domestic Violence.

El Salvador is the most dangerous country in the world outside of a war zone: Recent months have seen as many as 40 murders per day, spurred by intensifying gang violence and organized crime. Stories of violence from the small Central American nation often focus on the violence perpetuated by gangs and organized crime groups, which is an issue that affects all aspects of Salvadoran society—from cab drivers paying extortion payments, to young men being recruited by gangs, to mothers and wives losing sons and partners.

However, in a country where violence is so visible, violence against women remains the elephant in the room. The problem is large in scope but overlooked in public dialogue. Worldwide, El Salvador has the highest rate of femicide, a term for the murder of a woman based on her gender. Femicides and cases of domestic violence have increased in El Salvador, fueled by a culture of impunity and machismo.

I can't say that I always follow his advice, but Hermano Juancito does a good job of reminding us of all the different types of violence that the people of Central America confront on a daily basis. There's violence that comes from organized crime, gangs, petty crime, revenge, sexual jealousy, domestic violence, alcohol, state violence, and structural violence. The causes of violence are not all independent, of course, but we should not reduce violence in Central America to that which emanates from gangs, drug traffickers, organized crime, and the state.

I'm not sure that El Salvador has the highest rate of femicide in the world, but violence against women is a serious issue.
Just came across a startling or [better descriptor] - frightening - statistic: 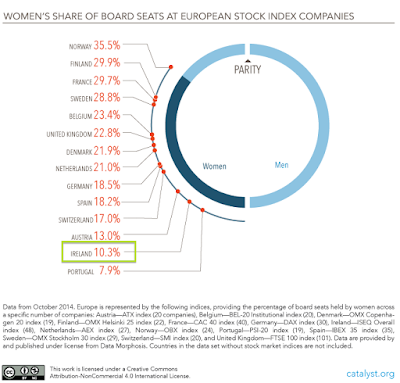 Yes, the issue of causes for each country performance in this metric is complex.

But there is no excuse for Ireland's corporate culture in this: it goes without saying that women residing in Ireland (be they of Irish or foreign nationalities) are educated, trained and have comparable experience, aptitude to work, career aspirations and human capital to be exactly on par with men, even after we adjust for maternity leave and family formation.

10.3% women share on Irish boards is simply out of any tangible relation to the modern, competitive enterprise culture we want to continue building here.