With the pause in ECB QE over the holidays season, bond markets have been largely looking forward to 2016 and counting the blessings of the year past. The blessings are pretty impressive: ECB’s purchases of government bonds have driven prices up and yields down so much so that at the end of this month, yields on some USD1.68 trillion worth of Government bonds across 10 euro area countries have been pushed below zero.

Value of bonds with yields below ECB’s -0.3% deposit rate, which makes them ineligible for purchases by the ECB, is $616 billion, just shy of 10 percent of the $6.35 trillion of bonds covered by the Bloomberg Eurozone Sovereign Bond Index. As the share of the total pool of marketable European bonds, negative yield bonds amounted to more than 40% of the total across Europe at the start of December (see here: http://www.marketwatch.com/story/40-of-european-government-bonds-sport-negative-yields-and-more-may-follow-2015-12-02).

In my view, both consensus positions are highly risky. On ECB expectations. Setting aside inflationary dynamics, ECB has continuously failed to ‘surprise’ the markets on the dovish side. Nonetheless, the markets continued to price in such a surprise throughout 2015. In other words, current pricing is probably already reflecting high probability of the QE extension/amplification. There is not much room between priced-in expectations and what ECB might/can do forward.

Beyond that, my sense is that ECB is growing weary of the QE. The hope - at the end of 2014 - was that QE will give sovereigns a chance to reform their finances and that the economies will boom on foot of cheaper funding costs. Neither has happened and, if anything, public finances are remaining weak across the Euro area. The ECB has been getting a signal: QE ≠ support for reforms. And this is bound to weigh heavily on Frankfurt.

On inflationary side, when we strip out energy prices, inflation was running at around 1.0% in November and 1.2% in October. On Services side, inflation is at 1.2% and on Food, alcohol & tobacco it is at 1.5%. This is hardly consistent with expectations for further aggressive QE deployment and were ECB to engage in more stimulus, any reversion of energy prices toward the mean will trigger much sharper tightening cycle on monetary side.

The dangers of such tightening are material. Per Bloomberg estimate, a 1% rise in the U.S. Fed rates spells estimated USD3 trillion wipe-out from the about USD45 trillion valuation in investment-grade bonds issued in major currencies, including government, corporate, mortgage and other asset-backed securities tracked by BAML index: 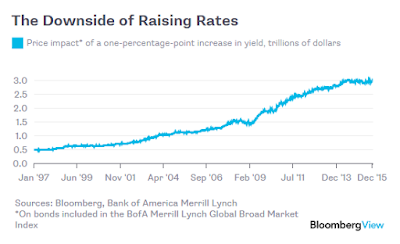 European bonds are more sensitive to the ECB rate hikes than the global bonds are to the Fed hike, primarily because they are already trading at much lower yields.

Overall, thus, there is a serious risk build up in the Euro area bond markets. And this risk can go only two ways in 2016: up (and toward a much worse blowout in the future) or down (and into a serious pain in 2016). There, really, is no third way…
Things are getting ugly in the bond markets. Bund 10 year is already up ca 7bps, while Italy is up 9bps.

Here's yesterday close for the 'peripherals': 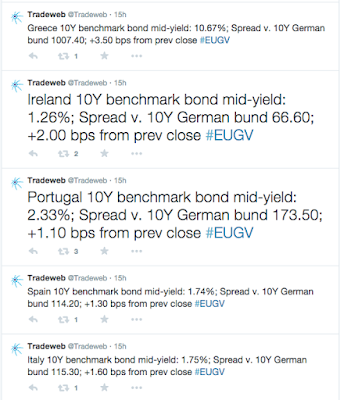 And Italy, Spain, Portugal on a longer view: 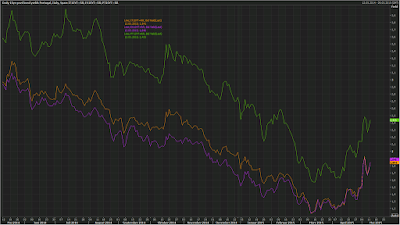 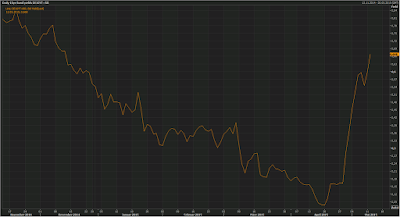 Meanwhile, the theme of investment flows (ETFs) rotation is may be starting, although European ETFs are seeing record inflows, breaking USD500 billion mark in April: 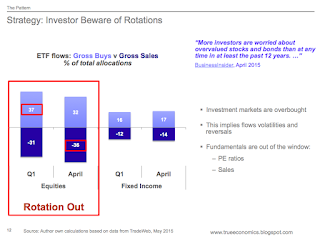