My first column for The Currency covering "Ireland, global trade wars and economic growth: Why Ireland’s economic future needs to be re-imagined": https://www.thecurrency.news/articles/1151/ireland-global-trade-wars-and-economic-growth-why-irelands-economic-future-needs-to-be-re-imagined.

Synopsis: “Trade conflicts sweeping across the globe today are making these types of narrower bilateral agreements the new reality for our producers and policymakers.” 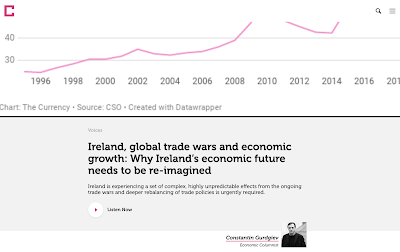 Per recent discussion on Twitter, I decided to post some summary stats on changes in Irish total trade with the UK in recent years.

Here is the summary of period-averages for 2003-2017 data (note: pre-2003 data does not provide the same quality of coverage for Services trade and is harder to compare to more modern data vintage). 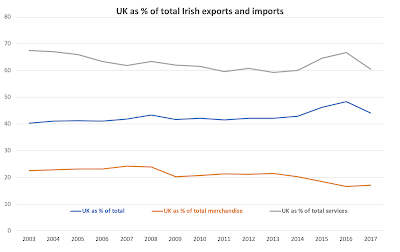 Using (for accuracy and consistency) CSO data on Irish trade (Services and Merchandise) by the size of enterprise (available only for 2017), the UK share of Irish trade is disproportionately more significant for SMEs: 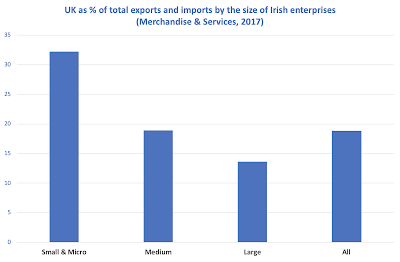 In 2017, SMEs (predominantly Irish indigenous exporters and importers who are the largest contributors to employment in Ireland, and thus supporters of the total tax take - inclusive of payroll taxes, income taxes, corporate taxes, business rates etc) exposure to trade with the UK was 51.2 percent of total Irish exports and imports. For large enterprises, the corresponding importance of the UK as Ireland's trading partner was 13.62 percent.
In reality, of course, Irish trade flows with the UK are changing. They are changing in composition and volumes, and they are reflecting general trends in the Irish economy's evolution and the strengthening of Irish trade links to other countries. These changes are good, when not driven by politics, nationalism, Brexit or false sense of 'political security' in coy Dublin analysts' brigades. Alas, with more than half of our SMEs trade flows being still linked to the UK, it is simply implausible to argue that somehow Ireland has been insulated from the UK trade shocks that may arise from Brexit. Apple's IP, Facebook's ad revenues, and Google's clients lists royalties, alongside aircraft leasing revenues and assets might be insulated just fine. Real jobs and real incomes associated with the SMEs trading across the UK/NI-Ireland border are not.
Whilst a few billion of declines in the FDI activity won't change our employment rosters much, 1/10th of that drop in the SMEs' exports or imports will cost some serious jobs pains, unless substituted by other sources for trade. And anyone who has ever been involved in exporting and/or importing knows: substitution is a hard game in the world of non-commodities trade.
Irish trade in goods statistics - the ones responsible for the tax-induced economic dizziness in the National Accounts over 2014 - are back at posting more absurd numbers.

Now, take a look at some dizzying numbers for March: 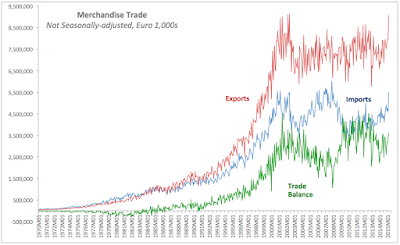 Put frankly, even Google's big data analysts would struggle connecting these numbers to any tangible reality. 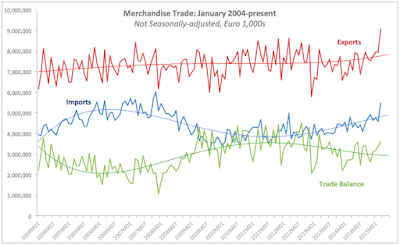