Remember last year vigorous debate about whether debt (in particular real economic debt - as I call it, or non-financial debt - as officialdom calls it) matters when it comes to growth? Well, the debate hasn't die out… at least not yet. And some heavy hitters are getting into the fight. Òscar Jordà, Moritz HP. Schularick and Alan M. Taylor paper, "Sovereigns versus Banks: Credit, Crises and Consequences", Working Paper No. 3: http://ssrn.com/abstract=2585696

Ok, so some key preliminaries: "Two separate narratives have emerged in the wake of the Global Financial Crisis. One interpretation speaks of private financial excess and the key role of the banking system in leveraging and deleveraging the economy. The other emphasizes the public sector balance sheet over the private and worries about the risks of lax fiscal policies." The problem is that the two 'narratives' "…may interact in important and understudied ways", most notably via debt and debt overhangs.

Time for Krugmanites to pop some champagne? Err, not too fast: "However, we find evidence that high levels of public debt have tended to exacerbate the effects of private sector deleveraging after crises, leading to more prolonged periods of economic depression."

Wait, what? A state indebted to the point of losing its shirt (or rather default on pay awards to trade unionised workers and retirees) imposes cost on private sector that can be detrimental during private sector own deleveraging? Yeah, you betcha. It is called power of taxation. Just as during the current crisis the Governments world wide gave no damn as to whether you and I can pay kids schools fees, health insurance and mortgages, so it was thus before.

"We uncover three key facts based on our analysis of around 150 recessions and recoveries since 1870:

Now, take a more in-depth tour of the changes in fiscal and private non-financial debt across 17 advanced economies since 1870s: 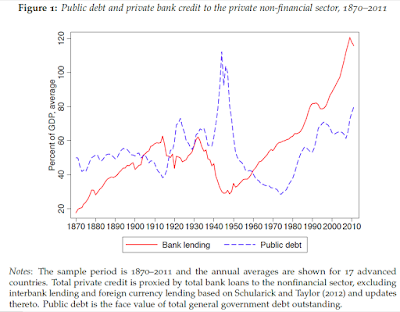 Oh, yeah… 1950s and 1960s public deleveraging was done by leveraging up the real economy. And it didn't stop there. It got much much worse… instead of deleveraging one side of the economy, both public and private sides continued to binge on debt. Through the present crisis.

So "what does the long-run historical evidence say about the prevalence and effects of private and public debt booms and overhangs? Do high levels of public debt affect business cycle dynamics, as the public debt overhang literature argues? Are the effects of either variety of debt overhang more pronounced after financial crisis recessions?"

So here are the results: 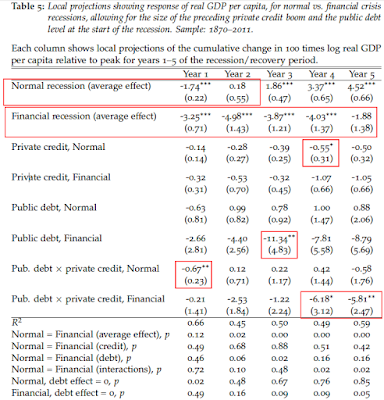 So the results provide "…a first look at over 100 years of the inter-relationships of private credit and sovereign debt. We end with five main conclusions":


Funny how no one can get the right idea, though - the reason public debt matters is because the state always has a first call on all resources. As the result, the state faces a choice at any point of deleveraging cycle:


No prizes for guessing which one they both will make… after all, they did so from 1970s on, and there are elections to win and seats to occupy...