Are you a smartphone zombie? One of those people who constantly walks around while absorbed by whatever you have displayed on your smartphone screen? The kind who often accidentally runs into things or people because you're so engrossed you don't notice obstacles in your path?

This three minute video from National Geographic describes the havoc that can result from the visual impairments shared by smartphone zombies:

Yanko Design's Minwook Paeng is an industrial designer who has developed a unique solution for smartphone zombies, who he groups as a new species, Phono Sapiens. He's developed (or "evolved") a design for a third eye, a wearable sensor that opens when your head is angled down to look at your smartphone instead of ahead at where you are going. He combines it with a proximity detector that alerts you if you're about to walk into an obstacle. The model in the following very short video demonstrates it in action:

As best as we can tell, there's no patent for it (yet), nor is there anything quite like it available on the market. The closest device we could find is a portable collision warning device for the blind and visually-impaired, which seems to be in the research and prototype phase.

Recently published research indicates these devices can lead to fewer collisions and improved mobility for the visually-impaired, which suggests a real world application is awaiting the refinement of Paeng's "third eye" concept.

Long streaks and especially long losing streaks in the S&P 500 have become much less common during the past 20 years.

That change has come however as stock prices themselves have become more volatile. The following chart visualizes the daily percentage change from the previous days close for the S&P 500 from 3 January 1950 through 30 June 2021. 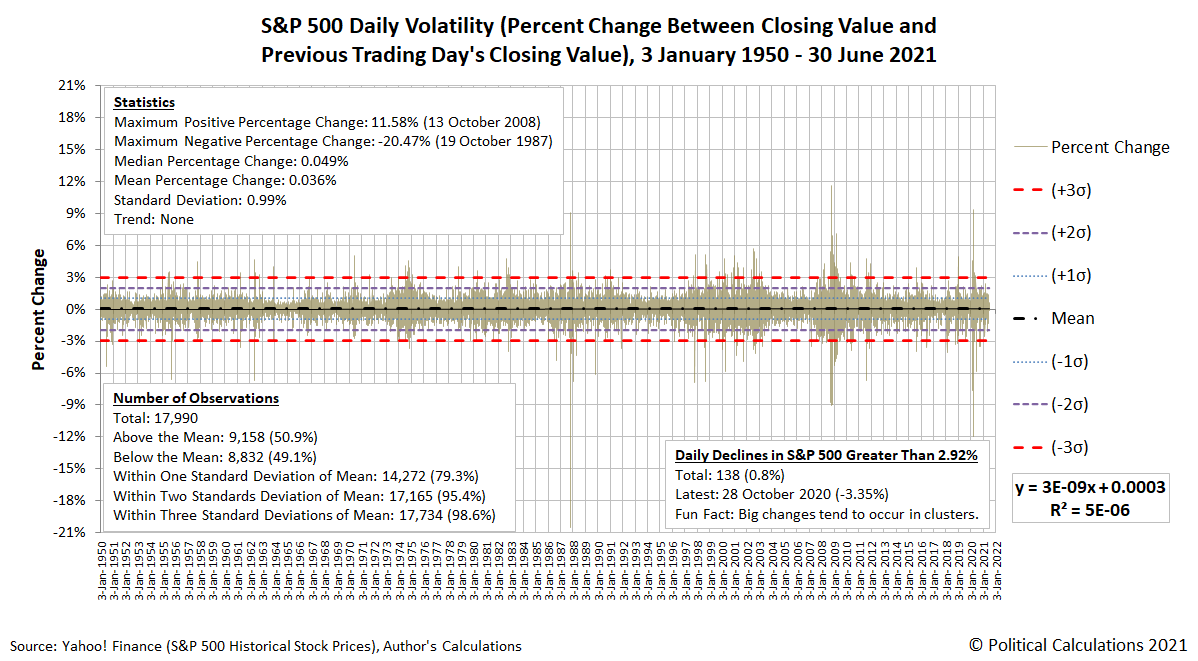 In this chart, we see that large daily percentage changes have become more common in recent decades. To simplify the visualization of that change, we're calculated the standard deviation of the daily percentage change in the S&P 500 by decade, presented in the next chart, where we find the typical volatility among the U.S. stock market's largest stocks by market capitalization has increased. 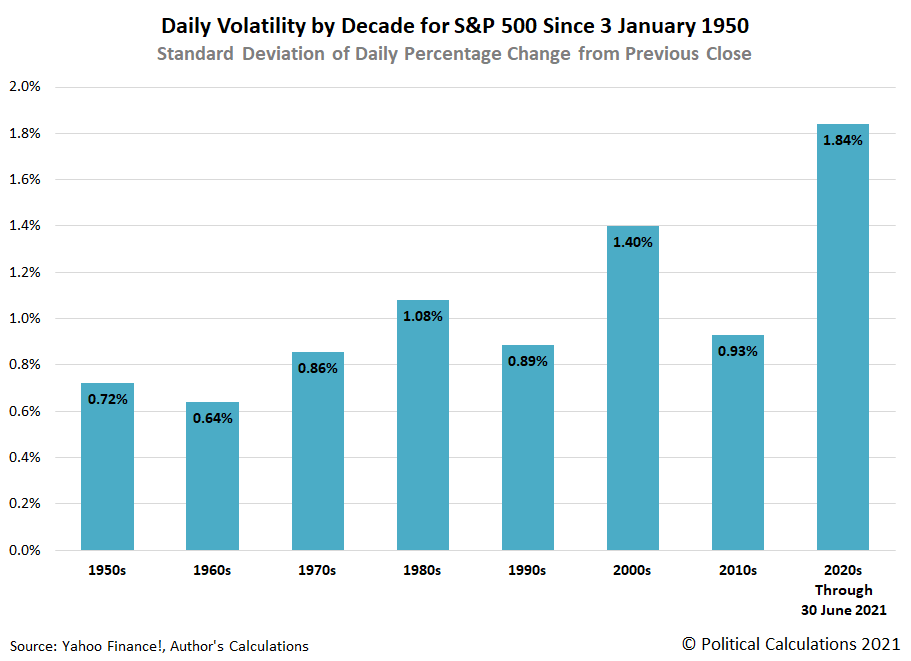 The final bar, for the 2020's, differs from the others in that it doesn't cover a full decade's worth of stock price changes. It covers the typical volatility observed to date in the year and a half from 2 January 2020 through 30 June 2021.

Still, it's a big jump over the preceding decade long periods, where we also see that the S&P 500 index in the decades of the 2000s have been considerably more volatile than the five decades that preceded them. The increase in the typical standard deviation indicates by decade bigger daily changes in stock prices have become more common in the 2000s.

That change offers a potential explanation for why losing streaks have become less common over the same period. Since the stock price volatility as measured by standard deviation has become larger than in previous decades, indicating larger daily changes when volatility breaks out, stock prices more quickly reach thresholds where investors buy the dips, which translates into shorter losing streaks.

Exit question: how profitable is buying big dips as a trading strategy?

The reports of how COVID-19 changed U.S. life expectancy are grim.

The pandemic crushed life expectancy in the United States last year by 1.5 years, the largest drop since World War II, according to new Centers for Disease Control and Prevention data released Wednesday. For Black and Hispanic people, their life expectancy declined by three years.

U.S. life expectancy declined from 78.8 years in 2019 to 77.3 years in 2020. The pandemic was responsible for close to 74 percent of that overall decline, though increased fatal drug overdoses and homicides also contributed.

“I myself had never seen a change this big except in the history books,” Elizabeth Arias, a demographer at the CDC and lead author of the new report, told The Wall Street Journal.

The figures for just COVID-19's impact on U.S. life expectancy are roughly in line with the CDC's preliminary estimates from February 2021, which was based on the then-available data through the first half of 2020.

Unfortunately, the CDC's estimates are rather misleading. Dr. Peter Bach, the director of the Center for Health Policy and Outcomes at the Memorial Sloan Kettering Cancer Center, ran some back of the envelope calculations after the CDC released its preliminary estimates and came up with very different results.

The CDC reported that life expectancy in the U.S. declined by one year in 2020. People understood this to mean that Covid-19 had shaved off a year from how long each of us will live on average. That is, after all, how people tend to think of life expectancy. The New York Times characterized the report as “the first full picture of the pandemic’s effect on American expected life spans.”

But wait. Analysts estimate that, on average, a death from Covid-19 robs its victim of around 12 years of life. Approximately 400,000 Americans died Covid-19 in 2020, meaning about 4.8 million years of life collectively vanished. Spread that ghastly number across the U.S. population of 330 million and it comes out to 0.014 years of life lost per person. That’s 5.3 days. There were other excess deaths in 2020, so maybe the answer is seven days lost per person.

No matter how you look at it, the result is a far cry from what the CDC announced.

We built the following tool to do Bach's math, which checks out. You're welcome to update the figures with improved data or to replace them with other countries' data if you want to see the impact elsewhere in the world. If you're accessing this article on a site that republishes our RSS news feed, please click through to our site to access a working version of the tool.

So why is the CDC's estimate of the change in life expectancy estimate so different? As Bach explains, it is not because of either the data or the math, but rather, it is because of the CDC's assumptions in doing their math:

It’s not that the agency made a math mistake. I checked the calculations myself, and even went over them with one of the CDC analysts. The error was more problematic in my view: The CDC relied on an assumption it had to know was wrong.

The CDC’s life expectancy calculations are, in fact, life expectancy projections (the technical term for the measure is period life expectancy). The calculation is based on a crucial assumption: that for the year you are studying (2019 compared to 2020 in this case) the risk of death, in every age group, will stay as it was in that year for everyone born during it.

Locking people into 2020 for their entire life spans, from birth to death, may sound like the plot of a dystopian reboot of “Groundhog Day.” But that’s the calculation. The results: The CDC’s report boils down to a finding that bears no relation to any realistic scenario. Running the 2020 gauntlet for an entire life results in living one year less on average than running that same gauntlet in 2019.

Don’t blame the method. It’s a standard one that over time has been a highly useful way of understanding how our efforts in public health have succeeded or fallen short. Because it is a projection, it can (and should) serve as an early warning of how people in our society will do in the future if we do nothing different from today.

But in this case, the CDC should assume, as do we all, that Covid-19 will cause an increase in mortality for only a brief period relative to the span of a normal lifetime. If you assume the Covid-19 risk of 2020 carries forward unabated, you will overstate the life expectancy declines it causes.

In effect, the CDC's assumption projects the impact of COVID-19 in a world in which none of the Operation Warp Speed vaccines exist seeing as they only began rolling out in large numbers in the latter half of December 2020.

When the CDC repeats its life expectancy exercise next year, its estimates of the change in life expectancy should reflect the first year impact of the new COVID-19 vaccines, which will make for an interesting side by side comparison. Especially when comparisons of pre-vaccine case and death rates with post-vaccine data already look like the New Stateman's chart for the United Kingdom: 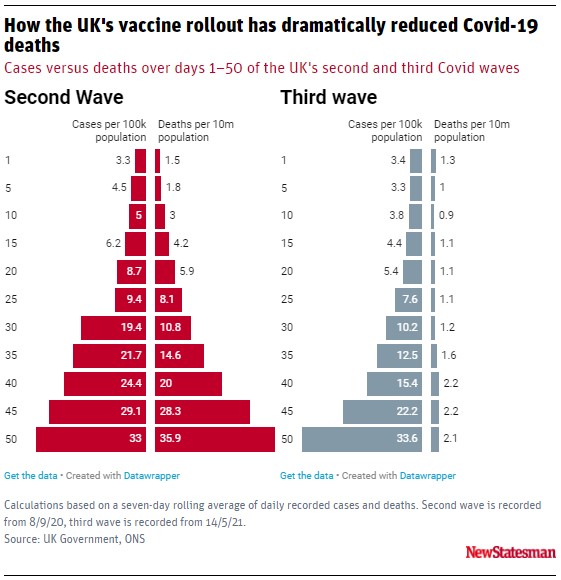 A combination of upward price adjustments in the average prices of new homes sold in the U.S. in recent months with smaller than expected downward revisions in the number of sales has produced a surprising outcome for the market capitalization of new homes in the U.S. In June 2021, the trailing twelve month average for the U.S. new homes market cap has risen for the first time since it peaked in December 2020. 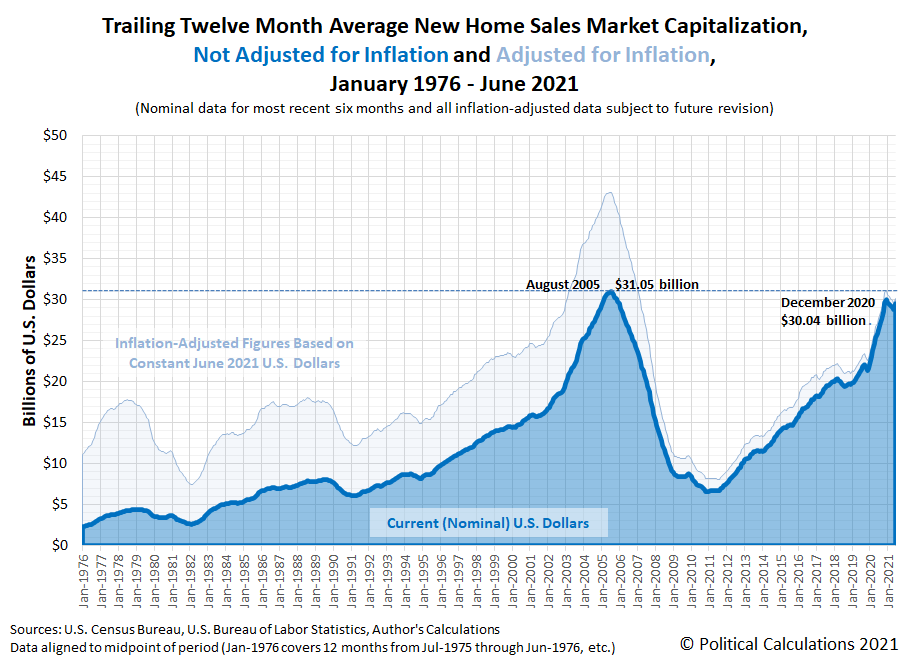 The surprising rebound comes after June 2021's sales volume for new homes recorded their lowest seasonally adjusted annualized rate since April 2020, which marked the bottom of the coronavirus pandemic recession. Thr result is based on initial data for June 2021's sales figures that will be revised at least two more times before being finalized in the next several months.

Looking at regional data, the biggest drop in the initial number of seasonally-adjusted annualized reported sales occurred in the U.S. Census Bureau's northeast region, which fell by 27% from May 2020. The number of sales also fell in the South, but by a much smaller percentage. Revisions for these regions will be something to pay attention to in upcoming months to see if the initial estimate of June 2020's market cap is a blip or the end of a microrecession for the industry.

As you can see in the following chart, that's right in line with where the dividend futures-based model says it should be when investors are keeping their focus on 2022-Q1 in setting current day stock prices. 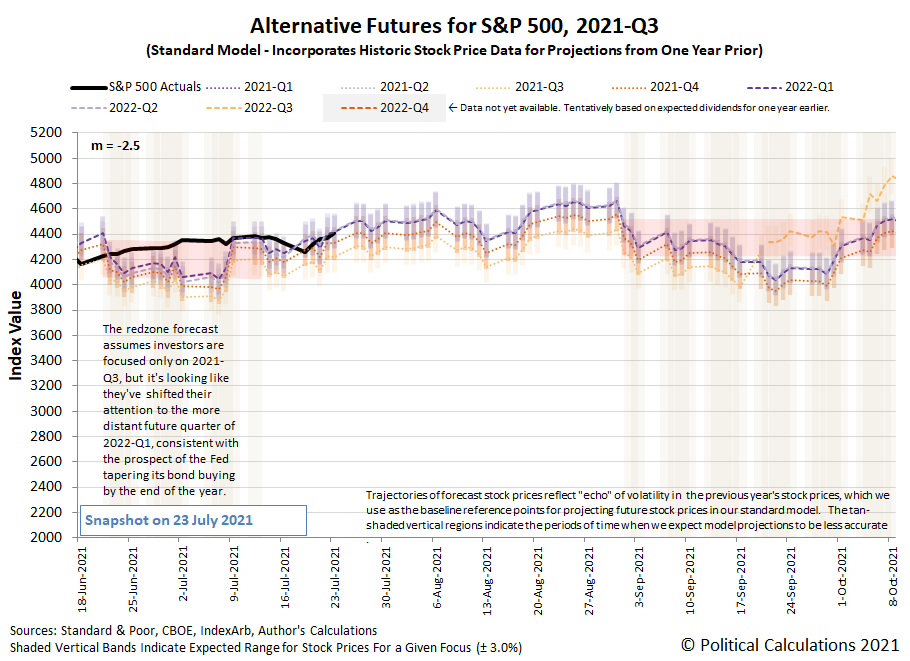 Meanwhile, there was news, but a lot less of it during the week that was. Here is our summary of its market-moving news headlines:

If you’re looking for market news about a specific company or the history of its stock prices, Yahoo! Finance is a very useful resource, particularly for the latter, where we’ve linked to its price history for the S&P 500.