The third full week of September 2016 saw the month's second Lévy flight event, which began in the aftermath of the Federal Reserve's FOMC meeting on Wednesday, 21 September 2016. We can see the result of that event, which coincides with investors appearing to have shifted their forward-looking focus from 2017-Q1 back out to the more distant future quarter of 2017-Q2 in the following chart. 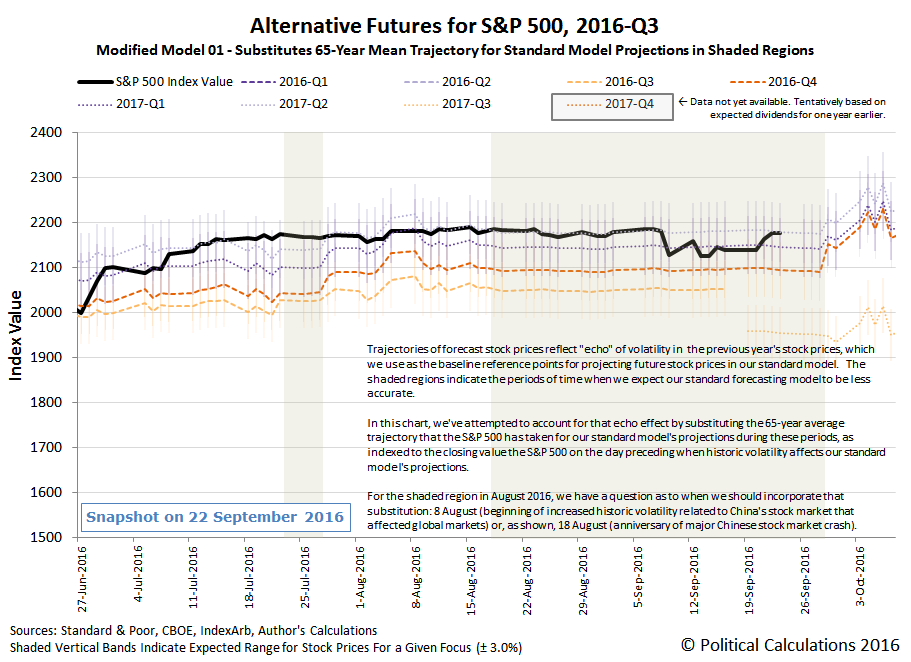 That shift occurred after the Fed indicated that it would once again hold off on increasing short term interest rates in the U.S., where investors had pulled in their forward-looking attention to the nearer term a little over two weeks earlier, as several Fed officials suggested they would support hiking those rates at the Fed's September meeting.

We don't think that investors were focused so much on 2017-Q1 as much as they were roughly evenly splitting their focus between the very near term quarter of 2016-Q3 and the distant future quarter of 2017-Q2. With the Fed's confirmation that they would not be hiking U.S. short term interest rates in 2016-Q3, investors quickly refocused their attention on the more distant future of 2017-Q2, with stock prices changing to be consistent with the expectations associated with that future quarter.

We have enough data now to confirm that our modified model was much more accurate than our standard model during the past several weeks in projecting the future trajectories that the S&P 500 would be likely to follow given how far forward in time investors were collectively looking in making their current day investment decisions. The following chart shows how the echo of the extreme volatility that was observed a year earlier affected our standard model's projections. 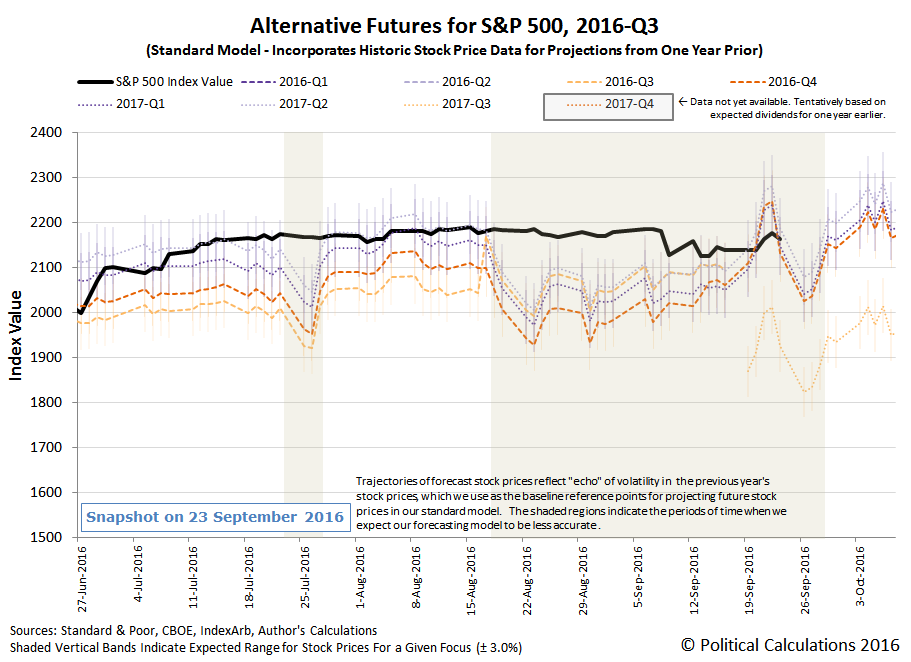 Although we show the echo effect from the previous year's volatility ending after 28 September 2016 in these charts, that may be somewhat misleading, as we're really entering a period which is reflecting the echo of a relatively short interlude in the greater stock price volatility that defined the latter half of 2015. As such, we expect that the trajectory of the S&P 500 will deviate from our standard model's projections during the next two weeks, but not as greatly as it did during the last several weeks.

We will have another prolonged opportunity to test drive our modified model in 2016-Q4.

Meanwhile, here are the headlines that caught our attention as newsworthy from their market-moving potential during Week 3 of September 2016.

Elsewhere, Barry Ritholtz rounded up the week's positives and negatives for the U.S. economy and markets.