The Kaiser Family Foundation and the Health Research & Educational Trust have released the results of their 2016 Employer Health Benefits Survey, which gives an idea of how much the health insurance coverage provided by U.S. employers costs.

Combined together, these costs represent the amount of money that the average American employee can expect to pay before their health insurer would begin paying the majority of costs for the actual health care they consume. The following chart indicates the average annual costs for employers and employees for health insurance premiums and deductibles in 2016. 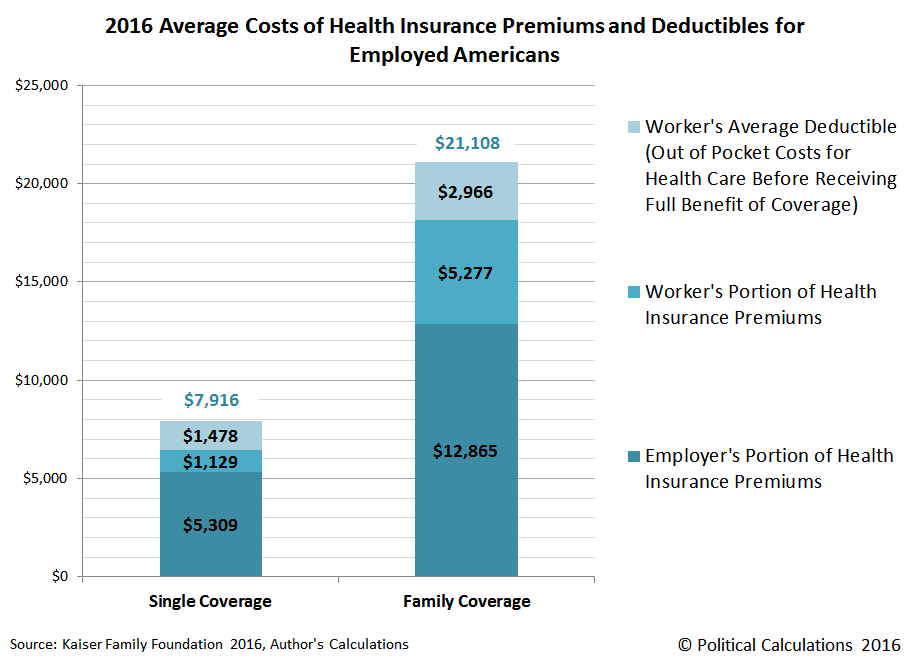 Most of these values are directly provided in the 2016 Employer Health Benefits Survey, however we've estimated the average cost of the deductibles for employees selecting family health insurance coverage by calculating the weighted average deductible that applies for each major category of health insurance coverage according to the percentage enrollment for each plan type in 2016, whether conventional, Health Maintenance Organization (HMO), Preferred Provider Organization (PPO), Point of Service (POS) or High Deductible Health Plan (HDHP).

U.S. workers pay no income taxes on the amount of money their employers contribute to paying their health insurance premiums on their behalf. That exemption has existed since World War 2, when the U.S. government passed legislation to allow U.S. firms to provide these alternative compensation benefits in order to attract and retain skilled employees at a time when the wage and price controls of that era prevented them from being able to directly pay them more.