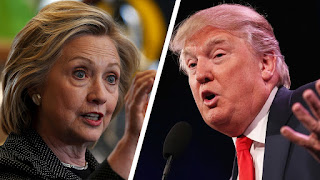 1.  Hillary Clinton is not great at being able to take down a great hulking target standing right next to her.  Perhaps she's wary because of the various scandals attached to her own person, but such scandals are in no way equivalent to the host of issues suggesting Trump is unfit for high office.

2. Trump really has no use for his vice-presidential running mate.  Rarely has a No 2 been so publicly humiliated as Mike Pence was tonight when Trump dismissed his views with the words "He and I haven't spoken and I disagree".  If Pence had any dignity left he would leave the ticket.  He hasn't and he won't.

3.  Trump could have been a nightclub bouncer; his body language was tense and uneasy throughout and he wouldn't sit down, preferring to loom ominously over the set.

4.  Trump got off lightly over the video of his sexist comments - or virtual endorsement of sexual harassment - and shoudn't have done.

5.  Trump wants to put in place criminal proceedings against his opponent if he wins, with the intention of seeing her jailed.  He would do well in an authoritarian banana republic.

6.  Hillary is far more comfortable talking policy than debating, and it showed.  She allowed Trump to lead the debate several times.  She's not an instinctive politician in the way her husband or Obama are.

7.  This debate will have changed few minds, but it may well have entrenched their respective supporters behind the two candidates.

8.  Trump is awful.  He is grotesque, lies congenitally, has few ideas about the policies he name-checks, is brutalistic and should never have been a contender.  But you get the democracy you vote for.