With all PMI data in (China Services data delay was a strange aberration this month), we can tally up 3Q 2016 PMI results. Based on 3mo averages, here is the summary for Manufacturing sector:
Brazil: Over 3Q 2016, Brazil’s Manufacturing sector continued to post sub-50 readings, indicating a strong pace in economic contraction. Overall, 3Q 2016 average Manufacturing PMI came in at 45.9, which is a single of slower economic contraction compared to 2Q 2016 (42.5), but basically the same rate of decline as in 1Q 2016 (46.0). 3Q 2016 was 10th consecutive quarter of sector contraction in Brazil. Worse, PMI for Brazil’s manufacturing has now averaged 49.9 over the period from 1Q 2007 through 3Q 2016. In other words, average quarterly PMI has been consistent with zero growth for 10 and a half years now.
Russia: In contrast to Brazil’s misfortunes, Russian manufacturing PMI strengthened from 49.7 in 2Q 2016 to 50.5 in 3Q 2016, reaching above 50.0 level for the first time since 4Q 2014. Still, at 50.5, the reading is not statistically different from 50.0 and signals weak turnaround in the sector. 3Q 2016 level of PMI breaks a string of 6 consecutive quarters of sub-50 readings. The depth of Russian downturn is self-evident: the last time Russian Manufacturing PMI reached above 50.0 on a statistically significant basis was in 1Q 2013. However, for all the troubles with the economy, Russian performance is significantly stronger than that of Brazil across recent years. In addition, 3Q 2016 reading for Russia is the second strongest in BRIC group, after that of India. To keep things in longer term perspective, however, Russian Manufacturing quarterly PMI averaged just 50.2 since 1Q 2007, hardly a sign of any serious growth over the last 10 and a half years.
China: Chinese Manufacturing PMI averaged 50.2 in 3Q 2016, up on 49.1 in 2Q 2016 and the strongest reading in 8 quarters. As with Russian Manufacturing PMI, Chinese reading for 3Q 2016 is not statistically different from 50.0, and once adjusted for the strong positive skew in the historical data probably underlies continued major slowdown trend in the economy. Again, for comparative purposes, since 1Q 2007, Chinese Manufacturing quarterly PMI averaged just 50.7 - a figure ahead of both Brazil’s and Russia’s, but still a reading that is too weak for the rapidly growing economy dependent on Manufacturing.
India: India’s Manufacturing PMI averaged 52.2 in 3Q 2016, which represents a substantial rise on 51.0 average in 2Q 2016 and marks the fastest pace of sector growth in the country since 4Q 2014. 3Q 2016 also marked 12 consecutive quarter of above 50 readings for Manufacturing PMI. In contrast to all other BRIC economies, India’s Manufacturing PMI averaged 51.7 reading consistent with growth for the period between 1Q 2007 through 3Q 2016.
Overall, BRIC Manufacturing PMI did firm up in 3Q 2016, with three out of four BRIC economies reporting nominal above-50 readings for the index for the first time since 1Q 2014. As the result of improving conditions across all BRIC economies, BRIC Manufacturing PMI reached 50.4 in 3Q 2016, up on 49.0 in 2Q 2016. The rise is broadly in line with Global Manufacturing PMI improvement from 50.4 in 2Q 2016 to 51.0 in 3Q 2016.
Table below summarises recent changes: 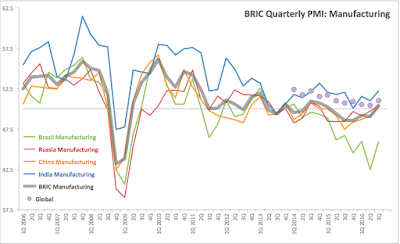