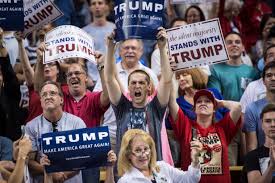 This has been an extraordinary presidential election.  In its outsize anger, ugliness and insurgent appeal it has beaten every modern presidential election into a grey shadow of virtual irrelevance.  For some presidential historians you have to go back to 1828, the culmination of a four-year long populist campaign by General Andrew Jackson against the Washington establishment led by President John Quincy Adams, to find a similar one.  Even then Jackson did at least have some concrete public achievement behind him.
The reason it has been so outsize, and so ugly, is of course entirely down to just one of its candidates – Donald J Trump.  Everything one says about this election, one is really saying about Donald Trump himself.  He has dictated the discourse of the campaign.  He has consistently dominated the media coverage.  He is the outlier, the leader of an angry, often ugly movement of alienated citizens who just needed someone to take their irrational hatred onto a higher platform.  Donald Trump is their man.  For all of his differences from his supporters – he is wealthy, well-connected, insulated from problems, benefits from rather than suffers from deals with foreign powers – he has become their messiah.   Hillary may be his nominal opponent, may even be the victor on Tuesday, but he has been by far the crucial figure in this campaign.
There is much that appals about Donald Trump, but the most appalling thing is the utterly fanatical, eyes-closed-shut loyalty of his band of supporters.  Democracy, after all, isn’t just about the leaders.  It is about the people who make them leaders.  Democracy is the only system of governance that puts the people front and centre.  And if the image they project, through the leaders they choose, is an unpleasant one, well that is the whole point of the system.  Media pundits may be trying to find ways of describing the wilful ignorance and strongly held bigotries of Trump supporters in more anodyne terms, but you can’t ignore the fact that he could not possibly have got where he is unless a significant number of ordinary Americans hadn’t bought in to his incendiary, falsehood laden rhetoric.  He has never disguised what he stands for, and the excuse that “we didn’t really know what he was like” will never be one that can be used by Trump supporters.  But then they will never want to use such an excuse, because they will never need to claw back from their support for Trump.  He is why they are with him.  His rhetoric reflects their thoughts.  His attitudes – or at any rate the ones he chooses to project – are their attitudes. 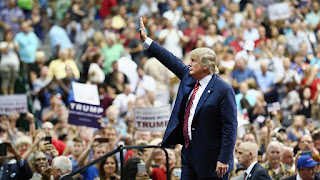 Isolated, angry, alienated, frozen out from the modern political firmament?  Trump supporters are nothing of the kind.  They are wilful players in a toxic campaign and their views, their positions, are front and centre in this campaign.  It is Hillary Clinton, a woman who has tried to pursue her aims of civic improvement through decades of grinding involvement in the establishment process, who seems to be the alienated, isolated individual at times.
It doesn’t how many emails you destroy if you are a private businessman (Trump has deleted many thousands); it doesn’t matter how many lawsuits you face (Trump has some 75 pending against him covering everything from fraud, political subversion and sexual harassment); it doesn’t matter that you can never willingly tell the truth, that you manufacture evidence and make up issues as you go along.  If you are not a “politician”, not part of the “establishment” then for Trump supporters, that’s fine.  Do anything.  You deserve to.
Even this weekend, the classic Donald Trump post-truth machine has been both evident and rapturously received and supported and re-tweeted by his followers and acolytes.  When President Obama – a man whose moral authority and dignity seem so far removed from the grubby Trumpian realities as to make him seem altogether elevated on another plane of existence – seeks to calm his own crowd, and defend the right of a protestor to make his pro-Trump stand at one of his rallies, Donald Trump himself manages to tell this as an example of the president “screaming” at a protestor.  Trump says he wants to punch protestors in the face; Obama tells his audience to calm down and allow the right of protest.  But in Donald’s world – endorsed  by his supporters – he is the virtuous one and Obama the unhinged fascist.
Then when another opponent at a Trump rally holds his anti-Trump sign, the paranoia that engulfs the whole Trump campaign sees him being rushed off the stage, his mad audience shout “gun” and then precipitate a mass pile in on the protestor before he is led away with full military escort.  In Trumpland, this becomes brave Donald’s escape from near assassination.  They were tweeting this nonsense long after it was evident that it was nothing of the sort, because truth is subservient to their image of themselves as brave, isolated freedom fighters, rather than violent, intolerant thugs.
This campaign has been ugly because Trump’s supporters are ugly and they need their candidate to be so too.  This campaign has barely touched the surface of any policy discussions because that involves a rationality that has fled the Trump supporters, because it would mean engaging with the world of truth not the world of make-believe which they have constructed.   This campaign reinvents events because that’s the way they fit into a make-believe narrative.  This campaign has seen unprecedented bigotry towards Hispanics, women and blacks, because that is what Trump supporters want to see.
Democracy allows the people to come centre stage.  It is no good simply moving the unpleasantness of this campaign onto the shoulders of one man, since he represents the active desires and beliefs of his supporters.  Donald Trump is successful not because of his own innate brilliance, but because of his native cunning in understanding and encapsulating the vision of his supporters.  This is really the only way to understand how such a man can have come so close to the White House – may even be its resident for four years.  If this democracy looks ugly today, it isn’t because just one man has made it so.  It is because democracy is simply doing its job – reflecting the will of the people.  Tuesday will show us just how many people.