Totally dishonest.  No mention that the high 2015 temps were an effect of a natural El Nino weather pattern -- nothing to do with CO2

Look at the CO2 levels from Australia's Cape Grim climate observatory over the heart of the El Nino period.

Within an accuracy of parts per billion, there was NO increase in CO2 levels at all! The warming over the El Nino period was ENTIRELY natural, with NO contribution from a CO2 rise. CO2 levels did NOT rise so they CANNOT be responsible for the higher temperatures.

Below we see where the peak of the El Nino effect was.  High temps coinciding with NO rise in CO2 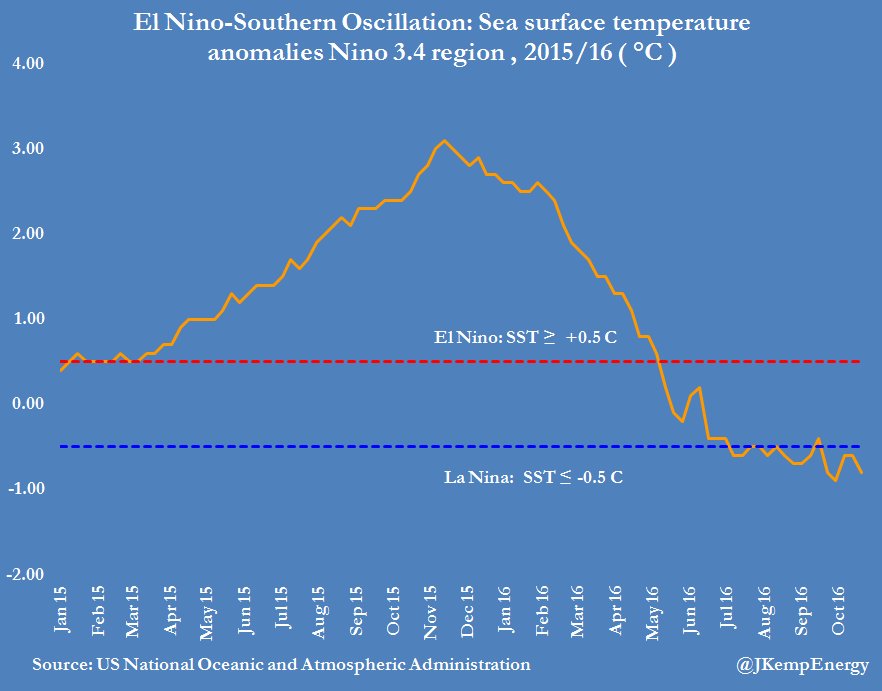 So, it was during a period of no CO2 rise that temperatures peaked.  Super pesky


Australian scientists say the hottest year on record globally in 2015 could be an average year by 2025 if carbon emissions continue to rise at the same rate.

The latest study has tried to define the concept of what is a new normal when talking about climate change.

“If we continue with business-as-usual emissions, extreme seasons will inevitably be the norm within decades and Australia is the canary in the coal mine that will experience this change first,” says Dr Lewis.

“If we don’t reduce our rate of emissions the record hot summer of 2013 in Australia — when we saw temperatures approaching 50 degrees Celsius in some areas — could be just another average summer season by 2035.”

The recent State of the Climate report by the peak science body, the CSIRO, and the Bureau of Meteorology also says severe fire seasons fueled by increasingly hot days will continue for Australia.

Australia’s climate has warmed by around 1 degree celsius since 1910. Extreme fire weather, and a longer fire season, has increased across large parts of Australia since the 1970s.

And 2015 was the warmest year since modern record-keeping began in 1880, according to analysis by NASA’s Goddard Institute for Space Studies.

However, the latest Australian research shows record-breaking temperatures can be prevented from becoming average.

“Based on a specific starting point, we determined a new normal occurred when at least half of the years following an extreme year were cooler and half warmer,” says Dr Lewis. “Only then can a new normal state be declared.”

The research team looked at temperatures from December to February across Australia, Europe, Asia and North America.

“The results revealed that while global average temperatures would inevitably enter a new normal under all emissions scenarios, this wasn’t the case at seasonal and regional levels,” says Dr Lewis.

“We found that with prompt action to reduce greenhouse gases a new normal might never occur in the 21st century at regional levels during the Southern Hemisphere summer and Northern Hemisphere winter.”

The research is published in the Bulletin of the American Meterological Society.

TWO young thugs linked to the violent Apex street gang will be deported after their visas were revoked under tough new migration laws.

The duo, aged 19 and 20, will be expelled to their countries of birth or put into immigration detention after they have finished serving out sentences in youth detention.

Police sources told the Herald Sun that both men are associated with the notorious Apex gang, believed to be responsible for a spate of violent burglaries and carjackings across Melbourne’s southeast.

The young men are just two of 173 foreign thugs living in Victoria whose visas have been cancelled in the past financial year.

In 2014, migration laws were amended to give Immigration Minister Peter Dutton the power to strip visas from non-citizens who fail to pass a character test or who have been convicted of an offence involving a jail term of more than 12 months.

Figures reveal that in Victoria in 2015-16, the visas of 23 child sex ­offenders, two convicted murderers and 23 people guilty of drug offences were cancelled, leaving them liable to ­deportation on completion of jail terms. The tough new laws were ­initially used to kick out foreign-born bikie gang members.

But in April, the Government used them to revoke the visa of an associate of the Apex gang, who was deported to New Zealand.

The Herald Sun understands Sudanese-born Isaac Gatkuoth, 19, who was on ice when he pointed a shotgun at the head of a terrified motorist during a robbery, is the latest Apex member whose visa has been revoked.

Gatkuoth — who has denied being an Apex member — could be forced to return to Africa next year after serving 14 months in a youth detention.

In May, a court heard he had endured a hellish upbringing before moving to Australia at age nine. Raised by his sister, he hasn’t seen his mother since he was about five, and recently learned his father died when he was a toddler.

The visa of the second Apex member, a New Zealand-born 20-year-old, has also been cancelled. In January, the man was sentenced to 27 months for offences including armed robbery, theft and arson.

The Herald Sun understands authorities are poised to revoke the visas of a further two Apex gang members.

Mr Dutton refused to comment on the latest cases, but reiterated his determination to revoke the visas of convicted criminals.

“Australia is a generous nation and we settle a record number of people in our country each year, but we won’t hesitate to cancel visas of people who commit crimes against Australians,” Mr Dutton said

Liberal backbencher Jason Wood, an ex-policeman whose electorate of La Trobe has experienced a recent wave of aggravated burglaries and car-jackings, welcomed the visa cancellations.

Mr Wood — whose own home was recently burgled — told the Herald Sun: “These violent criminals give up the right to stay in Australia.

“This action sends a crystal-clear message that they will be booted back to their home country.”

More than 1500 people, including more than 100 criminal bikie gang members and 25 convicted murderers, have been expelled since the laws were introduced.

Education is high stakes. It's not good enough to throw ideas about teaching methods at a wall and see which one sticks. Classroom practice has to be guided by the best research, to give children the best chance of strong learning gains.

One teaching method in particular has been consistently shown to be effective on a variety of measures -- direct and explicit instruction. These terms are generally used interchangeably to refer to a set of instructional practices characterised by highly structured and carefully sequenced lessons in which it is made clear to students what they need to learn and how to go about it. Student progress is checked frequently and they are expected to master each step before moving to the next.

This teaching method has been shown to be effective not just for fundamental skills like literacy and numeracy, but also higher level conceptual understanding and creativity.

A specific form of this method is Direct Instruction -- a comprehensive teaching program that includes both direct instruction pedagogy and curriculum content. DI programs have been the subject of dozens of studies, which have been overwhelmingly positive

At a forum co-hosted by CIS and Good to Great Schools Australia this week, several outstanding school leaders explained how DI and direct instruction led to success in their schools.

The Cape York Academies use DI -- adapted to align with the Australian Curriculum -- achieving substantial gains for students in remote communities where such outcomes had previously been thought impossible. Good to Great Schools co-founder and chair Noel Pearson and community leaders Dion Creek and Phyllis Yunkaporta explained the careful process by which DI had been chosen, and spoke passionately about the changes they had seen in the children attending Cape York Academies.

Despite the fact that policies and programs put in place by schools systems still fail to embrace evidence, increasing number of schools are adopting these methods and Direct Instruction programs. Hopefully this small groundswell will turn into a tidal wave.

A firebrand Muslim sheik has gone on a hate-filled rant instructing young children that Jewish people have 'hatred and envy' in their heart.

Sheik Youssef Hasan, the leader of prayer at Quakers Hill Mosque, in Sydney's west, described Jews as having 'hearts harder than stone' during a regular Friday surmon in front of youngsters and their parents.

Video of the lecture on the second chapter of the Koran shows sheik Hassan talking about the differences Allah sees between the 'hearts' of Jews and Muslims.

'Allah mentioned the heart of the Jewish,' sheik Hassan began.

'Many of the Israelites - the Jewish - their heart become very hard and Allah said they become like a stone, but actually harder than a stone.'

The sheik then relates his sermon to a section of the Koran, where it states that 'for indeed there are stones from which rivers burst forth'.

In what he calls a 'great warning for Muslims', sheik Hassan dismisses that good can come from Jewish hearts.

Despite the seemingly obvious message of his lecture, sheik Hassan denied to The Australian that he was talking about the entire Jewish race.

He claims that instead he was referring to a small group named specifically in the holy text.

'I've got so many friends (who are) Jewish and I have no problem with these people at all,' he said.

Vic Alhadeff, the CEO of the NSW Jewish board of deputies said the incident was disappointing.

'It's very unfortunate that any religious leader would make such a bigoted and gratuitous remark,' he said.