Writing at CNN Money, Tami Luhby or a CNN headline writer asked and answered in a single headline: "Is Obamacare really affordable? Not for the middle class".

Now that's the kind of journalistic efficiency we like to see! But how true is it? Let's dig into the story for the details....

Obamacare is now a tale of two health insurance programs.

For the 85% of enrollees with lower incomes, federal subsidies make the premiums somewhat more affordable. Those even closer to the poverty line can get additional subsidies that reduce the deductibles, which can run into the thousands of dollars.

But for many middle class Americans -- a single person earning more than $47,520 or a family of four with an income of $97,200 -- the pricey premiums and deductibles mean health care coverage remains out of reach....

For the 10.5 million enrollees on the Obamamcare exchanges, health insurance costs are more transparent. And more of the burden falls on the consumers. That is leaving an untold number of Americans opting to remain uninsured, rather than shell out thousands a year for premiums and deductibles. In 2015, 46% of uninsured adults said that they tried to get coverage but did not because it was too expensive, a Kaiser study found.

The big price spikes for 2017 have some current Obamacare enrollees wondering whether they'll renew their plans next year or opt to pay the penalty of $695 per person, or 2.5% of income, whichever is larger.

We thought it might make for an interesting project to consider how 2017's costs for health insurance coverage from the Affordable Care Act (ACA) exchanges might affect a family of four in one of the states that are seeking some of the biggest spikes in health insurance premiums over the previous year.

We selected Arizona, which saw the largest year over year price increase for ACA health insurance in 2017 after having previously ranked among the states with the lowest premiums, which we previously have argued was the result of predatory pricing by one of the health insurers approved to sell health insurance on the state's federal government-operated ACA exchange. Health insurance premiums in the state are now more consistent with those in neighboring states.

We next defined our prospective family of four as consisting of two 40 year old, non-smoking adults and two children under the age of 19. We then went county by county throughout the state to extract the cost of "Silver"-level health insurance coverage available to such a household earning each county's median household income, where we next calculated both the tax credit subsidy they might receive to estimate their monthly premium after subsidies, and also the Affordable Care Act "shared responsibility" income tax they might otherwise have to pay if they were to choose to go without health insurance.

Our results for our hypothetical family of four whose household income puts them exactly in middle of the income distribution of their county are summarized in the following table. If you're reading this post on site that republishes our RSS news feed, but that doesn't neatly render the table below, please click here to access the article as it appears on our site.

In nine of Arizona's fifteen counties, a family of four earning their county's median household income would find it more financially advantageous to pay Obamacare's "shared responsibility" additional income tax than to buy a subsidized "Silver"-level plan on the state's Affordable Care Act exchange. For these counties, the annual savings from choosing to pay the tax instead of subsidized health insurance range from a low of $363 for Yavapai County to a high of $3,675 in La Paz County. 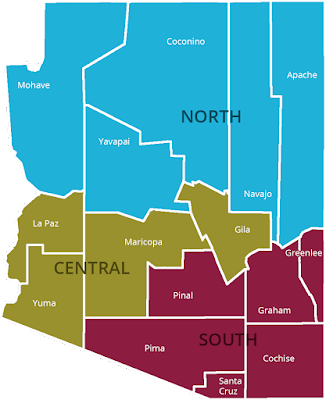 In five of Arizona's counties, a family of four earning their county's median household income would come out financially ahead by buying subsidized health insurance, though here, the annual savings for doing that range from $0 in Yuma County to a high of $588 in Navajo County.

Only Apache County, with the lowest median household income of all counties within the state, a family of four with its median income of $32,396 would be eligible to be enrolled in the state's expanded Medicaid health insurance program for lower income households, and thus would not have to choose between which would be better between paying Obamacare's additional income tax or paying for subsidized health insurance coverage. Across the state, the maximum income for a family of four people to be eligible to enroll in its expanded Medicaid welfare program is $33,534, which is 138% of the federal poverty income threshold of $24,300 that applies for a household of that size.

On just the basis of subsidized health insurance premiums alone then, we find that for household of four people whose annual income is either at, near or above the median household income level for their county within the state, it can be more financially beneficial to choose to pay Obamacare's additional income tax than to buy subsidized health insurance coverage through the Affordable Care Act exchanges. Since the median income defines the middle of the income distribution, this result means that for a majority of such middle class households, Obamacare is less affordable than paying its additional income "shared responsibility" tax for those choosing to go without health insurance.

On a final note, a household with ACA health insurance would still be responsible for paying a considerable portion of any actual health care they might consume, up to the limit defined by the deductible for their insurance, which is above and beyond their basic cost for just having health insurance coverage. In Maricopa County, home to the largest population within the state, the Silver plan with the lowest deductible would require the insured family to pay $2,650 of their actual health care costs out of pocket before the health insurer might start fully picking up the tab for their medical bills.

Once those costs are also considered, a large portion of those below the median household income will find that Obamacare isn't affordable for them as members of middle class.