The U.S. Census Bureau's data for goods and services exported to the U.S. from China and from the U.S. to China in January 2017 suggests that both economies are growing much more strongly than they were a year earlier.

At least, that's what is suggested by the sharp rise in the exchange-rate adjusted year-over-year growth rate of the value of goods and services traded between the two nations in the following chart! 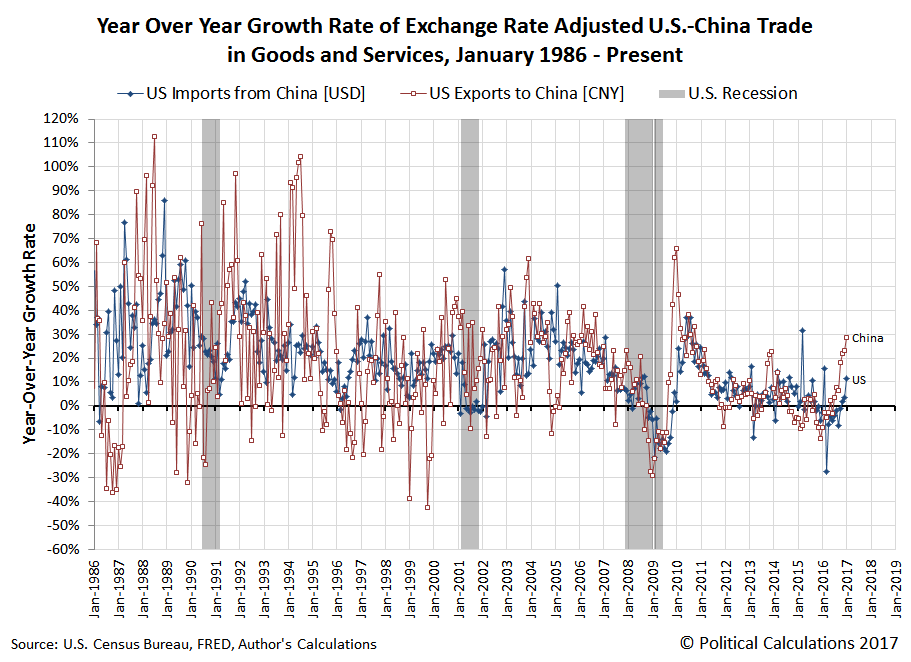 Before we continue, we should recognize that this data partially overlaps this year's weeklong Chinese New Year/Spring Festival holiday, which because the timing of the holiday is based on a lunar calendar, can greatly affect the year-over-year growth rate calculation for when the holiday falls entirely in the month of January or the month of February. This year, the Chinese holiday is straddling between the two months, where in 2016, it fell entirely within February.

Consequently, we anticipate that the data for the goods that China imports from the U.S. for February 2017 will show significantly higher growth. There is evidence that indicates that this is indeed happening, where China's preliminary trade data is showing such a remarkable surge in imports that they are outnumbering China's exports for the month:

That left the country with a trade deficit of $9.15 billion for the month, the General Administration of Customs said.

Most analysts, however, attributed the rare trade gap to distortions caused by the long Lunar New Year celebrations, which began in late January this year but fell in February in 2016. Many businesses shut for a week or more and factory production and port operations can be significantly affected.

Looking at the U.S. side of the trade ledger, the preliminary data for February 2017 also suggests a year-over-year increase, which is expected to be followed by larger volumes of exports in March and April:

For January, the most recent month for which data is available, ports in the report handled what was cited as an “unusually high” 1.67 Twenty-Foot Equivalent Units (TEU), which was up 6.5 percent compared to December and was up 12.5 percent annually. This high volume level came on the heels of Asia-based factories shutting down in advance of the Lunar New Year.

Some of the news reports on trade that we're seeing are also providing some estimates of how much the "border adjustment" tax being considered by the Trump administration would affect the trade balance, which we'll take a closer look at in upcoming weeks.

If you want to get there before us, you're more than welcome to do so - here's a tool that we built earlier this year to do some of the "tariff meets supply and demand" math, which you can pair with the appropriate trade source data.