The big story for the S&P 500 in Week 2 of February 2017 is the same story that has now been percolating for weeks: the U.S. stock market's prolonged streak of unusually low levels of volatility, where the market hasn't fallen by at least 1% of its previous day's closing value for 82 trading days. How unusual is that? Statistician Salil Mehta has provided some historical context :

Since its founding in 1950, the S&P 500 has clocked nearly 17 thousand trading days, of which there have been only 22 other “no 1% drop” streaks, which also endured at least 81 trading days. The previous one was pre-financial crisis in 2006, and that lasted 94 days.

That's for the day-to-day changes in the market's closing values. Over the last 40 days, the entire intraday range of trading for the S&P 500 has fallen within one percent of its previous day's closing value.

And yet, even with so little day-to-day movement, the daily closing value of the S&P 500 has somehow continued to manage to fall within the range we forecast back in the first week of 2017. 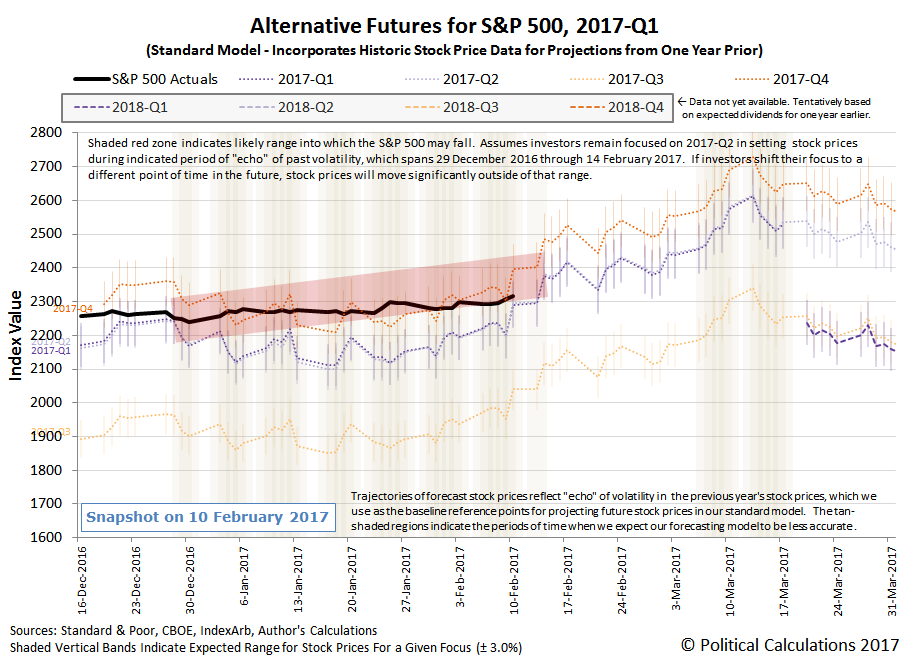 Meanwhile, here are the main headlines that caught our attention during the second week of February 2017 for their market moving potential, or lack thereof.

At The Big Picture, Barry Ritholtz summarizes the positives and negatives for the U.S. economy and markets for the trading week ending on Friday, 10 February 2017.